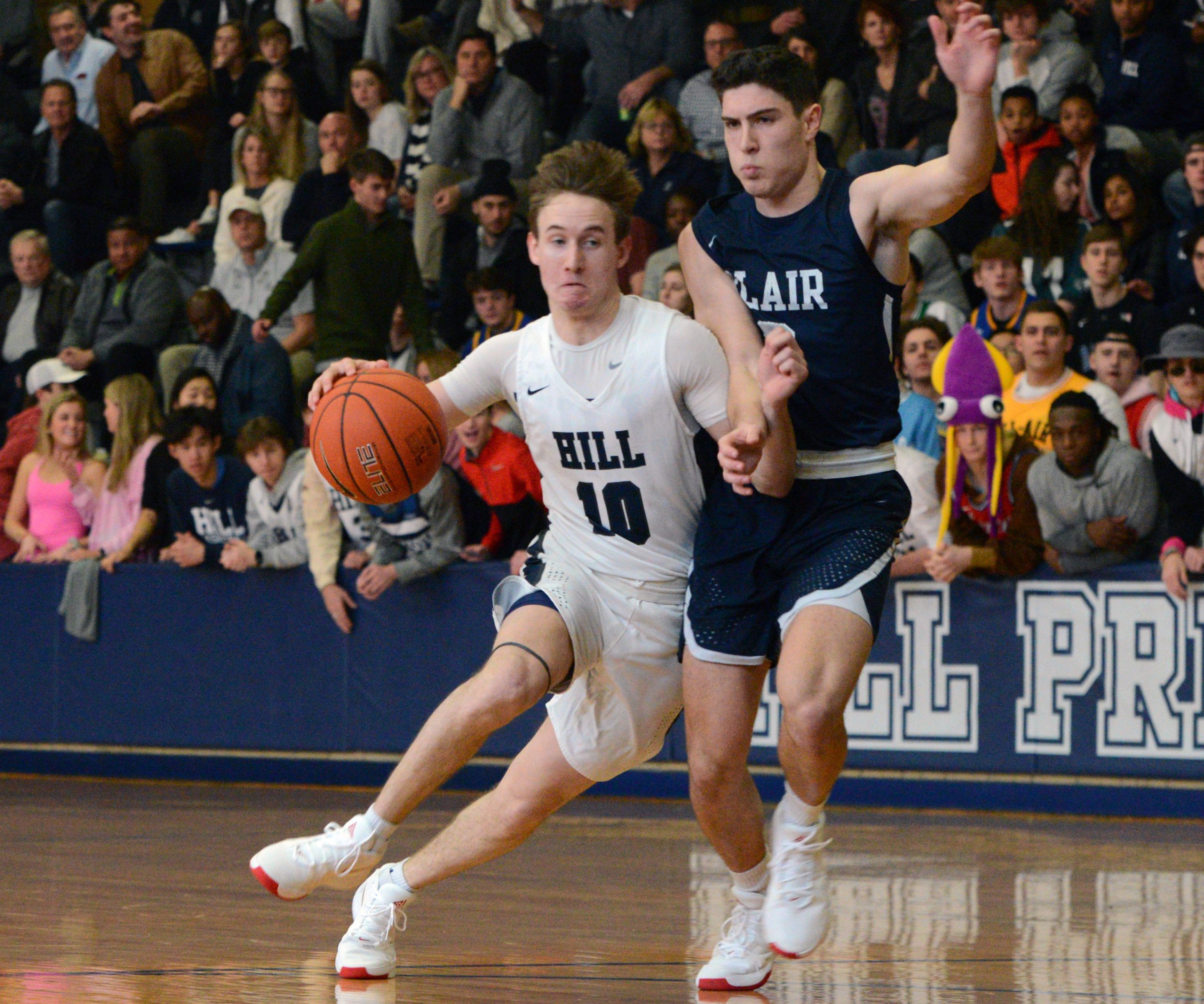 Hill had handed the Bucs their first loss of the season earlier this year, and the Blues, who went undefeated in MAPL play, had a raucous home crowd behind them adding an extra level of intensity to a game that already had a championship in the balance.

With two of his team’s other stars on the bench with foul trouble late in Sunday’s game, Blair junior Jaylen Blakes took over, scoring 15 of his game-high 18 points in the fourth quarter to give the Bucs a 61-51 victory and third straight MAPL crown.

Luke Kolaja added 13 points and Mike O’Connell chipped in 12 for Blair. Hill was led by Zach Lezanic and Caleb Dorsey with 14 points apiece followed by Gabe Dorsey with 11.

“We loved being the underdogs,” Blakes said. “We lost to them before. We came in and lost. We just felt the need to win and we had a little extra motivation.”

Hill entered Sunday seeking its first MAPL title since 2014, when the Blues won the league on their home floor. Hill played a tight contest with Blair in the championship game last season before the Bucs pulled away late for a 65-56 win.

After trailing by as many as nine points early in the third quarter and by seven with six minutes left after a Blakes three, Hill climbed its way back into the game with a 7-0 run, tying the contest 42-42 on a Lezanic three with 4:14 left.

Blair went up by two on a pair of Blakes free throws before the teams traded triples on three straight possessions — Kolaja, Lezanic then Blakes — to put the Bucs up 50-45.

Caleb Dorsey pulled Hill within two, 50-47, with 1:46 left to play, but Blair broke the Blues’ press and a layup by Kyle Cuffe put the Bucs back ahead by two possessions. Hill wasn’t able to respond, and Blakes went 9-for-10 from the line in the fourth quarter to ice the game, not missing until his final attempt.

“We clawed back. I think we were down seven and tied it up with about three, four minutes left,” Hill School coach Seth Eilberg said. “They made (two) threes … and we just weren’t able to answer. I thought we got some really good looks that we didn’t make and that’s sometimes how it goes down in a game like that. Somebody makes them and somebody misses them.”

The Bucs were without starting center Akoldah Gak for most of the fourth quarter after he fouled out with 5:43 to go then played the final two minutes without Kolaja when he picked up his fifth foul.

While Blakes shouldered the load, others like Cuffe, who had 11 points, and sophomore forward Lual Manayng, who blocked two shots late, made plays on both ends of the floor down the stretch Sunday to help close out the win.

“It definitely was a collective effort,” Blakes said. “We were just trying to do what’s best for our team.”

Hill stormed out to any early advantage Sunday, leading 14-7 after the first quarter. Blair chipped away in the second, but Hill found a way to respond each time the Bucs got close and held a 21-20 lead at the half.

After trailing for the majority of the first half, Blair flipped the script on Hill early in the third quarter. Mike O’Connell sparked a 13-3 run for Blair to start the second half, giving the Bucs a 33-24 lead midway through the third.

Sophomore Anthony Wise gave the Blues some big minutes in the second quarter after Lezanic picked up his second foul late in the first. Caleb Dorsey scored 11 of his 14 points in the first half.

“Caleb can really score and he also looks to facilitate and set other guys up,” Eilberg said. “With our lineups and theirs, that’s a good matchup for us. A lot of teams have trouble guarding him because Caleb’s like a 6-8 guard basically. He was able to attack and do that. We probably needed to get him some better looks and touches in the second half and didn’t.”

Hill is the No. 2 seed in the Pennsylvania Independent Schools Athletic Association tournament and will host either Haverford School or Friends Select in its opening game Friday.

Eilberg hopes the loss can ignite his players on another deep postseason run, particularly some of the younger ones who got their first taste of playoff experience this weekend.

“Some of them in that moment today I think were aggressive but need to be smarter and some guys weren’t aggressive enough,” Eilberg said. “That’s what you get experience playing in big games and big moments like that. You learn from that. As a team, there’s no margin for error against a really great team, and there were too many empty possessions, whether it was a turnover or a bad shot where we didn’t just maximize our potential to get a great shot.”