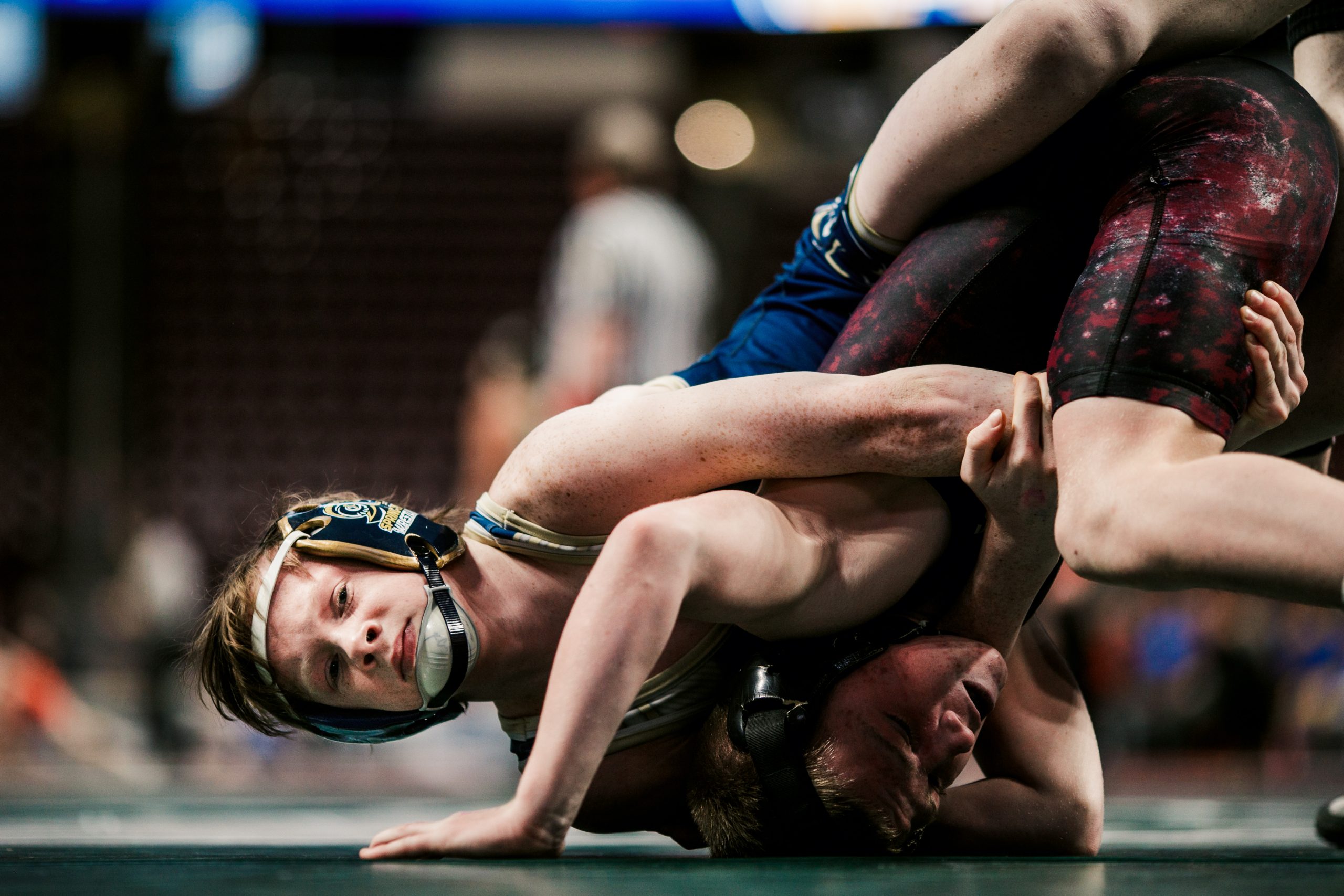 Cole Smith of Spring-Ford tries to turn Gettysburg's Reed Miller in a win at 106 pounds. (Nate Heckenberger - For MediaNews Group)

HERSHEY >> With a big mustang printed on the middle of the West Perry High mat Spring-Ford was wrestling on, it was fitting its horses started and finished a tight dual meet.

Star junior Joey Milano (182 pounds) got things going for the Rams. Star junior Jack McGill (152) finished it, on his birthday, to boot.

In between, enough Rams did their jobs to survive to day three of the Class 3A PIAA Duals at the Giant Center in Hershey, with a 29-22 win over the District 3 champs.

“I was confident in Jack,” Spring-Ford coach Tim Seislove said. “Jack goes out and gets the job done consistently and we can count on him. He wanted to go last and was excited about it.”

Earlier in the day, Spring-Ford fell victim to District 3 runner-up, Dallastown, 37-28, in the quarterfinals.

The second round consolation dual didn’t start well, either, with the Warriors jumping out to a 7-0 lead. Gettysburg’s returning seventh-place state medalist, Dylan Reinart, bumped up and led Milano, 3-2, late in the third. But Milano came up clutch, securing a takedown and tacked on a pair of back points for a 6-3 win.

“Coach told us the beginning of the match was the strength of their lineup,” McGill said. “Joey got a big win and got the team excited, rolling into the lower weights where we knew we could get some wins.”

Gettysburg took a 19-16 lead with four to go, but that would be the last time they led. Quinn Tobin (132), who joined Milano in winning his 99th career bout, and Zach Needles (138) combined for three bonus points to put the Rams up six.

“Our kids show up every day,” Seislove said. “All these matches are just close and down to the wire. They’re hard-fought, guys trying to get pins, guys trying to stay off their backs.”

Following a decision by the Warriors at 145, it was McGill’s turn to shut the door. He majored returning state qualifier, Luke Sainato, 9-1, to send the Rams to Saturday.

“It’s the first time it really came down to me,” said McGill, who turned 17 on Friday. “It’s my birthday, too, so that’s pretty exciting. It was a great match to be in and got the team all excited.”

For as good as Spring-Ford has been this season at minimizing bonus points and winning the swing matches, the Rams were poor against Dallastown. The 37 points allowed were the most Spring-Ford surrendered all season, and five bout wins were a season-low.

Spring-Ford’s Joey Milano returns Dylan Reinart of Gettysburg to the mat during a 6-3 win at 182 pounds. (Nate Heckenberger – For MediaNews Group)

Tight matches on paper went the wrong way, and sometimes in grand fashion. Xavier Cushman (170) and Sean Brogan (285) fell victim to cradles, and Quinn Smith (113) and Gus Carfagno (120) dropped winnable decisions. Carfagno led 5-0 in the first after hitting a headlock, but he couldn’t finish it and eventually lost, 9-7, in sudden victory to Adam Karlie.

“We’ve been getting a lot of good breaks during this run,” Seislove said. “That match, a couple things went against us and (Dallastown) took advantage. We were disappointed we didn’t take the opportunity to get to the state semifinals.”

Seneca Valley is on deck for the Rams, and the Raiders have become a familiar foe. Last year, Spring-Ford beat them by four in the second round of consis. Two years ago, Seneca Valley was 10 points better in the championship quarterfinals.

“We’re trying to win,” McGill said. “We want to get top four and get a medal. We’ve never done that, but first we have to focus on Seneca Valley. … It’s a rubber match between us, so we’re excited.”