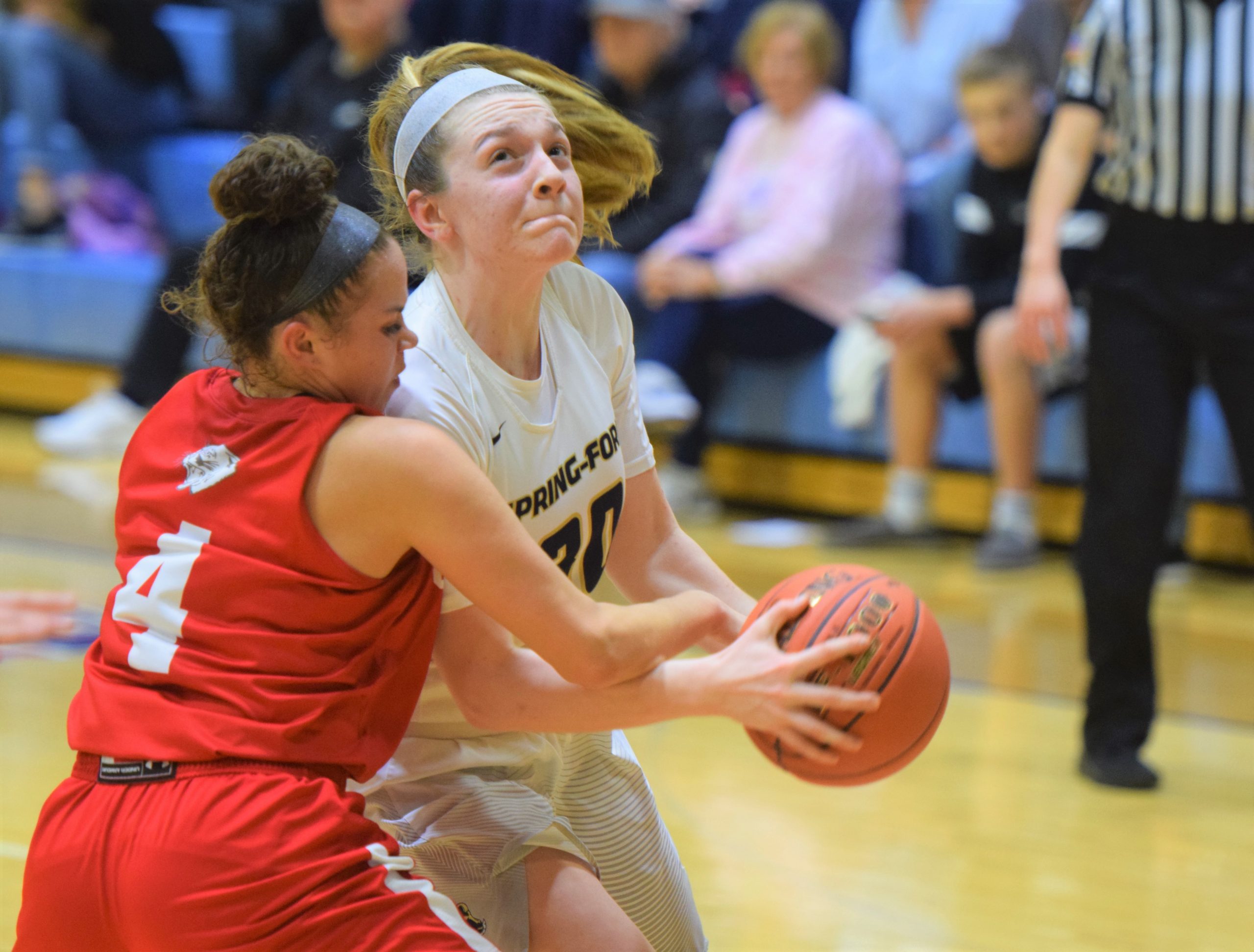 Skylar Sullivan drives to the basket as Owen J. Roberts' Avery White gets a hand in during their PAC semifinal Saturday. (Austin Hertzog - MediaNews Group)

ROYERSFORD >> Spring-Ford and Owen J. Roberts had already played two close games this season and, for a long time, appeared to be headed for another one on Saturday night. But the Rams clamped down on defense and eventually pulled away for a 54-38 win in the Pioneer Athletic Conference girls basketball semifinals at Spring-Ford High School.

Lucy Olsen scored 19 and Alyssa Yuan 10 to lead the Rams (20-3), who will play for a third straight PAC title Wednesday at 7 p.m. against Methacton, a 55-47 winner over Pottsgrove. Avery White topped the Wildcats (16-8) with 16 points and Hannah Clay followed with nine.

“I think we just kept the energy up,” said 5-9 junior guard Olsen, whose team trailed by one after a quarter and led by four and six after the next two periods before breaking the game open. “We played as a team and found each other. Our offense and defense were just flowing well and we got energy from the bench.”

Top-seeded Spring-Ford had beaten OJR 44-41 and 54-48 during the regular season and led 35-29 heading into the fourth quarter after a steal by Olsen that resulted in two free throws to end the third.

Then Abby Boyer knocked down a 3-pointer for the Rams and Yuan scored off a pass from Gabs Alessandroni for the largest lead of the game at 40-29. The Wildcats scored the next two points on free throws, but Spring-Ford broke it open on a basket by Hailey Hudak, a three-point play by Mac Maloney and two free throws by Skylar Sullivan.

“Owen J. played well,” said Olsen, who had six assists and three blocks. “We really had to keep our ‘A’ game going. Mac Maloney – she’s like an energy ball. She’s just so tough. She’s a great defender. Hailey also has lots of energy. She gets the rebounds. She wants the ball.” Fifth-seeded Roberts opened the scoring on a basket by LeClaire, who picked up two fouls in the first two minutes and sat out most of the first half. The Wildcats led 5-2 after a 3-pointer from the top of the circle by Clay and took their final lead of the contest at 14-13 on a one-hander in the lane by White.

But Olsen put the Rams back on top with an inside basket and two free throws by Yuan with three seconds remaining in the first half made it 20-16.

“We kept playing as a team. We stayed composed,” said Yuan. “As a team, we’re really good at getting rebounds, following each others’ shots. We always think that the shot’s not going to go in and we go after the rebounds.”

“She played really well with the two fouls,” Olsen said concerning LeClaire. “She’s so strong and aggressive. Her teammates really picked her up. In the end, we just pulled through.”

Boyer, Maloney and Sullivan each scored seven and Sullivan pulled down a team-high seven boards.  Brooke Greenawald had 10 rebounds as part of a 37-30 advantage on the boards by the Wildcats, but Spring-Ford held OJR to just 10-for-49 shooting from the floor.

The championship game will be a rematch of last year’s final when Spring-Ford defeated Methacton, 55-41.