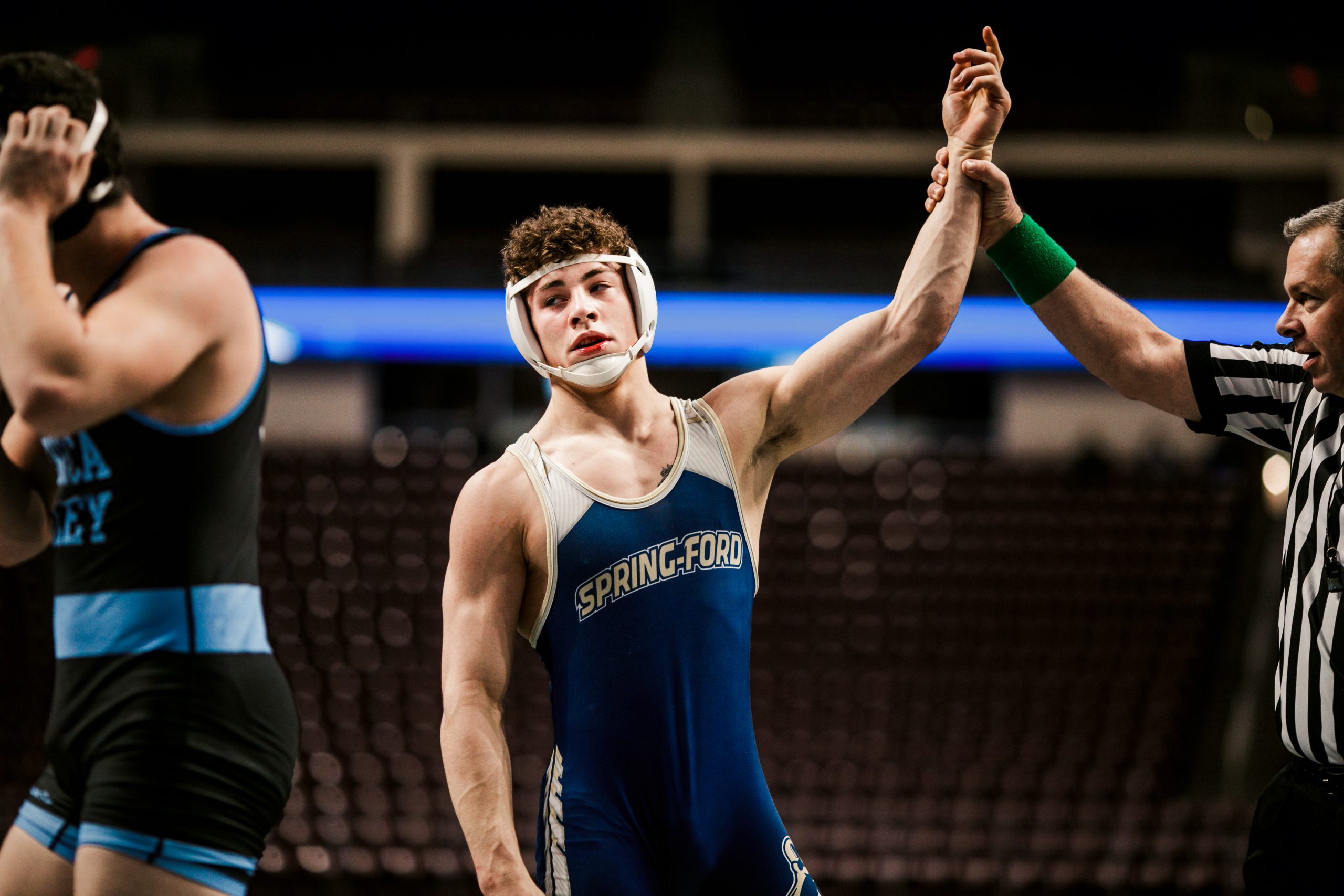 The Rams were proud of what they accomplished, reaching day three of the Class 3A PIAA Duals, but also a little disappointed they didn’t do more.

As a sophomore, Milano left Hershey with a fourth-place state medal. That was nice and all, but it wasn’t exactly what he entered the tournament hoping for.

“I think it helped motivate me,” Milano said. “I wasn’t happy with (fourth). This year I want to go take what I think I deserve.”

Through 36 matches, no one has been able to tell the Rams star otherwise. His 36th win of the season was a pin against Seneca Valley’s Conor Hayes, and that gave Milano 100 victories in 106 career bouts.

No one in school history reached 100 wins in less matches. Milano likely would’ve joined the century club earlier had he not suffered a season-ending injury at leagues as a freshman.

Milano has won three of the four postseason tournaments he’s competed in, with states the last one to conquer. Of his six career losses, three have come in the Giant Center, between the PIAA Duals or individual tournament.

Last March, Milano was pinned the only two times in his career, one by state champion and Penn State recruit Carter Starocci of Erie Cathedral Prep, and the other by Belle Vernon’s Scott Joll in the consolation final.

“He was disappointed that last match,” Spring-Ford coach Tim Seislove said. “He’s been doing a lot of wrestling, and right now he’s trying to have fun and getting ready for the postseason grind.”

“It’s nice to be acknowledged for getting 100 wins,” Seislove said. “McGill got it a month ago and Joey got it here. It’s awesome to do it, especially in Hershey.”

Spring-Ford’s Louis Carbajal pushes back against Seneca Valley’s Nick Funovits in an 8-6 win at 220 pounds. (Nate Heckenberger – For MediaNews Group)

Senior Quinn Tobin also entered Saturday’s action with 99 career wins, but he, like the rest of the Ram lightweights, felt the wrath of Seneca Valley’s strength.

Spring-Ford led, 12-3, after four bouts when the Raiders made their move. They won five straight, starting at 106 pounds, scoring 21 points along the way. The last result in that streak was a pin by two-time state champion, Alejandro Herrara-Rondon, against Tobin. He’ll have another shot at 100, Thursday, against Central Bucks East.

Zach Needles (138) and Xavier Cushman (170) pinned, and McGill (152) won a decision down the stretch, but Seneca Valley’s surge in the lightweights was too much to overcome.

“I think it was a great weekend for the kids,” Seislove said. “They battled every match. To be here with the top eight teams in the state, I think that’s a tribute to the seniors, for their dedication and commitment to the program.”

The Rams will graduate five senior starters, but they will return a very strong core that will likely have them competing for another District 1-3A Duals title next winter.

“I think it was very successful,” senior Louis Carbajal said. “Everyone did their job. Things don’t always go your way. We came to wrestle. It’s not the outcome we wanted, but we worked our butts off to get here.”