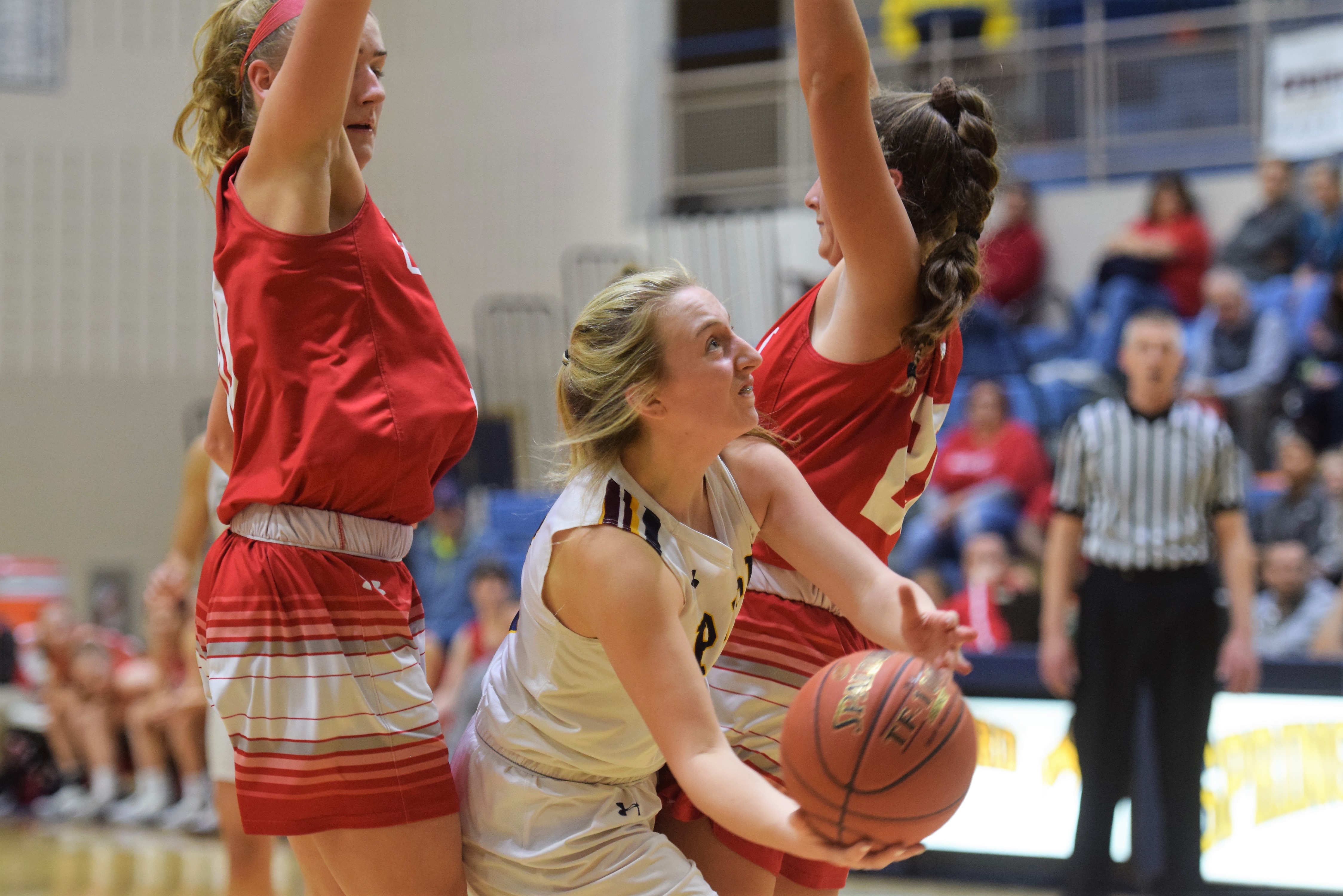 The Pioneer Athletic Conference girls basketball playoffs begin Thursday at Spring-Ford with an opening-round doubleheader featuring No. 3 seed Methacton against No. 6 Boyertown at 6 p.m. followed by No. 4 Pope John Paul II vs. No. 5 Owen J. Roberts at 7:30 p.m.

The Methacton-Boyertown winner advances to face No. 2 seed and Frontier Division champion Pottsgrove while the winner of PJP and Owen J. Roberts earns the right to face No. 1 seed and two-time defending league champion Spring-Ford in a doubleheader Saturday.

The championship game will take place at Spring-Ford on Wednesday, Feb. 12 at 7 p.m.

Here is a look at Thursday’s games:

Head to head >> Methacton defeated Boyertown 46-43 on Dec. 10, both team’s respective PAC opener. The Warriors had a trio with 11 points apiece while Julia Smith scored a game-high 16 for the Bears. …  On Jan. 9, Methacton dropped Boyertown 51-31. Sydney Hargrove posted a double-double with 10 points and 11 rebounds, Nicole Timko dropped a game-high 15 points and Sydney Tornetta delivered 12 points and 8 rebounds in the rout.

Methacton at a glance >> Methacton, which returned four starters from last year’s PIAA qualifier, enters on a 10-game win streak that began with the one-sided win over Boyertown. That streak includes a 42-39 win over top-seed Spring-Ford, the only PAC loss for the Rams over the past two seasons. The Warriors are led by sophomore guard Nicole Timko, the PAC’s second-leading scorer at 15.8 points per game (PAC-best 66 3-pointers), and senior forward Sydney Tornetta (12.2 ppg), who surpassed 1,000 career points last week. Freshman point guard Cassidy Kropp (7.4 ppg) has grown up fast – a key piece of the Warriors’ second half improvement – while seniors Sydney Hargrove (5.8 ppg) and Caroline Pellicano (3.9 ppg) are stalwarts in the frontcourt. Tori Bockrath and Allie Hazlett are the first players off the bench for coach Craig Kaminski’s squad. The Warriors allow only 30.9 points per game, best in the league. Prediction >> Methacton may be the No. 3 seed, but there’s an argument to be made it is in the best form of any league team. The Warriors have worked their way into late-season form as their group of multi-sport athletes got into basketball mode, Kropp gained confidence as a rookie and Tornetta brushed off a slow start. It’s added up one of the higher ceilings in the district. Boyertown, meanwhile, made noise early in the season by playing within a basket of Methacton and beating Owen J. Roberts, but the results haven’t been as flattering of late. The Bears are a 3-point shooting team, but with Timko, the Warriors are as good if not better, and the frontcourt matchup is firmly in Methacton’s favor with Hargrove and Pellicano capable of overmatching the undersized Bears. This one closer reflects the second meeting than the first … Methacton 46, Boyertown 32.

Head to head >> Owen J. Roberts handled Pope John Paul II 53-26 in their PAC crossover meeting on Jan. 14. It was a close game after one quarter but the balanced Wildcats held the Golden Panthers to single digits in the final three quarters. … This is a rematch of last year’s PAC opening round game, which was won by PJP, 42-34.

Pope John Paul II at a glance >> The Golden Panthers prevailed over Phoenixville on Monday night in a game that held dual stakes of effectively being a PAC and District 1 postseason play-in game. PJP rallied from 7 down in the fourth quarter behind sophomores Tess Crossan (season-high 15 points) and Amelia Kennedy (11). PJP is 6-4 in its last 10, 3-2 in its last five. Crossan (7.3 ppg) runs the point while Kennedy is scoring 10.1 points per game and senior Mary Kate Shannon (10.9 ppg)is as threat from 3-point range. Junior Kayla Ciuba (6.0) and senior Kayla Viney (4.3) lead the frontcourt for second-year coach TJ Lonergan. Owen J. Roberts at a glance >> The Wildcats are 7-3 in their last 10, including a 47-36 win over Frontier champion Pottsgrove on Jan. 23. They’ve lost two straight though, including a tight 41-39 loss to Methacton at home on Jan. 30. Owen J. has one of the better 1-2 punches in the PAC in senior forward Olivia LeClaire (12.9 ppg) and sophomore point guard Avery White (13.2). LeClaire, who passed 1,000 career points on Jan. 3, is as capable as they come in getting to the basket while White is versatile and a top ballhander in the area. They are complemented by senior guard Hannah Clay (7.4), senior forward Brooke Greenawald (6.0), senior wing Maddi Koury and rotation players Kianna Daye, Gabbi Koury and Alexa Vogelman.

Prediction >> OJR saw itself as a contender in the PAC ahead of last year’s league playoffs. Its run ended abruptly in the first round loss to Pope John Paul II, a fact that won’t be lost on the Wildcats ahead of Thursday. OJR has almost all the same leaders who experienced last year’s meeting and will be very motivated to not allow that to happen again. Conversely, PJP looks quite a bit different and has found life difficult in replacing so many key players lost from 2018-19. With last year’s memory and the gap being closer to their Jan. 14 meeting, Owen J. Roberts will take care of business emphatically … Owen J. Roberts 43, Pope John Paul II 26