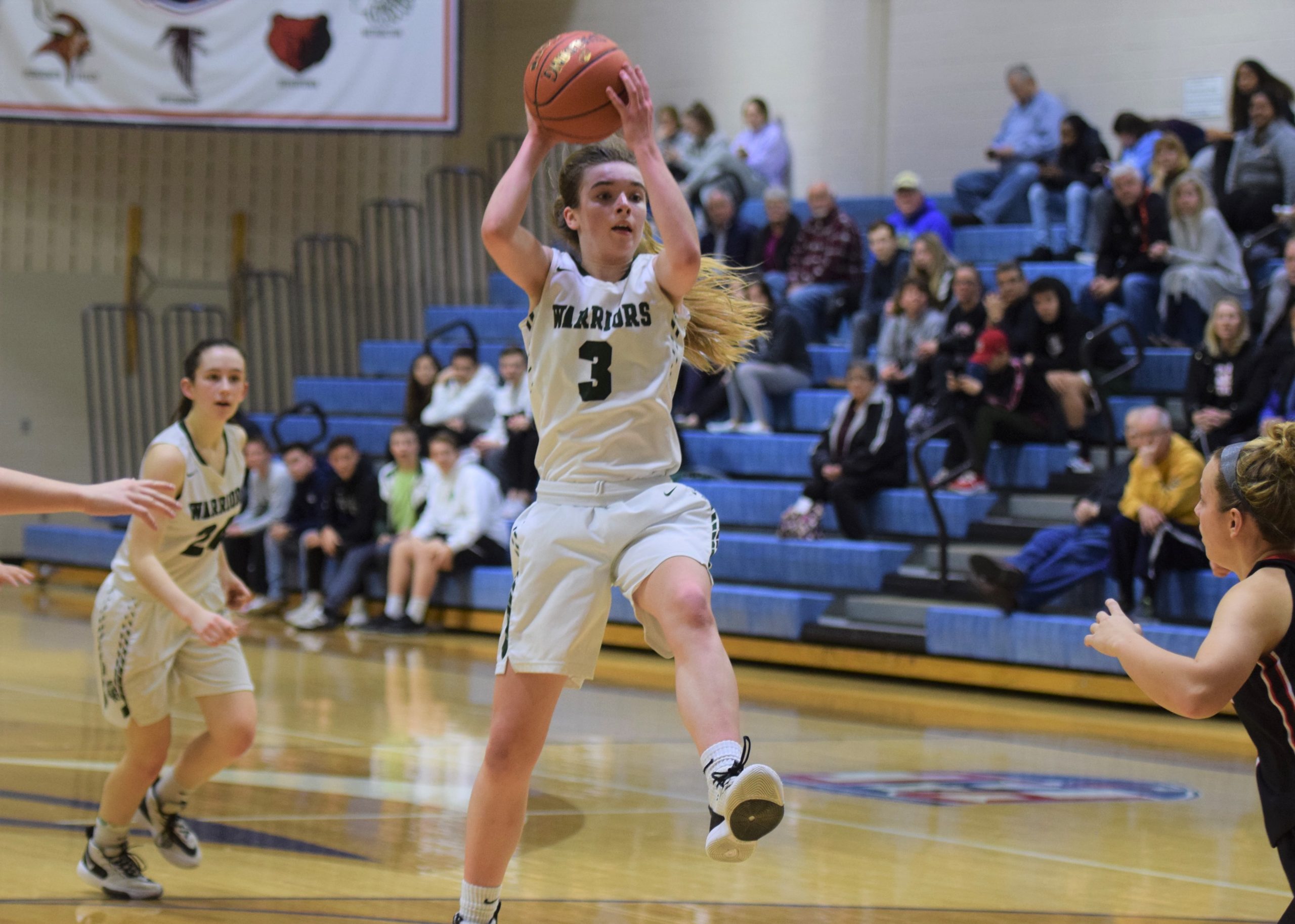 ROYERSFORD >> For a team with designs on a long postseason run this year, the Methacton girls’ basketball team couldn’t have asked for a better challenge to open the PAC Final Six playoffs Thursday.

The No. 3-seeded Warriors withstood a slow start and a furious late comeback from sixth-seeded Boyertown to hold on 45-35, extending their winning streak to 11 games and moving into the semifinals of the PAC Final Six at Spring-Ford High School.

Throughout the Warriors’ now 21-2 campaign, the bulk of their scoring prowess has come from sophomore guard Nicole Timko and senior Sydney Tornetta, while seniors Sydney Hargrove and Caroline Pellicano provide rebounding and defensive toughness in the paint.

But after a slow start saw the Warriors down by double digits after the opening stanza, it was time for Methacton to unveil a new weapon in the form of freshman point guard Cassidy Kropp.

Kropp provided half of the Warriors’ points in a 16-2 second quarter, canning a pair of threes while adding a late putback to give Methacton its first lead with just over two minutes left in the first half.

The freshman would eventually finish with a game-high 14 points.

“I’m trying to shoot more, be more assertive on offense as the season goes along,” said Kropp. “It’s the part of my game I’m working on.” Boyertown coach Jason Bieber admitted that stopping Nicole Timko was his defense’s focal point, and the Bears did hold the sophomore sharpshooter to only nine points on 3-of-7 shooting.

But it was Methacton’s 35-15 advantage on the boards that would negate Boyertown’s early and late runs. The inside combo of Hargrove and Pellicano completely eliminated any second chances for the Bears, holding Boyertown without an offensive rebound. Once junior Ashley Kapp cooled off after a nine-point first quarter, it was one shot and done for Boyertown on the offensive end.

“Their height does give us some problems,” admitted Bieber. “They close out hard on our shooters. Coach (Craig) Kaminski had a great game plan for that.

“I thought our rebounding was strong in the first quarter, but after that, they turned things around on us.”

A different Methacton team took the court after their slow first quarter, with Kropp heating up from deep while Hargrove (six points, eight rebounds) and Pellicano (four points, 11 boards) controlled the glass.

“I hate it when people are sullen or have their heads down — it’s not gonna work in the playoffs,” said Hargrove. “I take it on myself to keep the energy high.

“I think we started out really sluggish. It was a good wake-up call, because it doesn’t get any easier.”

Another 9-0 run during the third quarter spurred Methacton to its largest lead to that point at 33-21 before Kapp stopped the bleeding with a corner 3.

Boyertown got as close as three points midway through the final stanza after threes from Kapp (12 points) and Julia Smith (11 points), but the Warriors closed on a 7-0 run, Kropp and Sydney Tornetta icing the game at the charity stripe. Methacton dodged a bullet when Timko appeared to go down with an ankle injury early in the second quarter. The guard was able to return to the contest, however, just before halftime.

The Warriors move into a Saturday night showdown with Frontier Division champ and No. 2 seed Pottsgrove. Their ultimate goal for this stage of the postseason, of course, is a PAC championship, which would quite possibly require a rubber match with top-seeded Spring-Ford in next Wednesday’s PAC championship game. Methacton handed the Rams their only PAC loss of the past two seasons, 42-39 back on January 16.

“It can be challenging (not to look ahead), but how can we worry about (the championship) when we’re not there yet?” said Hargrove. “We need to keep our composure and start out strong on Saturday.”

Sixth-seeded Boyertown fell to 10-13, ending their PAC campaign, but the Bears remain in solid position for a berth into the District 1 tournament next week. Kapp (12) and Smith (11) both finished in double digits, while Avery Sweisfort finished with seven rebounds.

“We started strong, and we battled back at the end,” said Bieber. “But that second quarter hurt us, and give credit to Methacton — they didn’t miss from the foul line late in the game.”