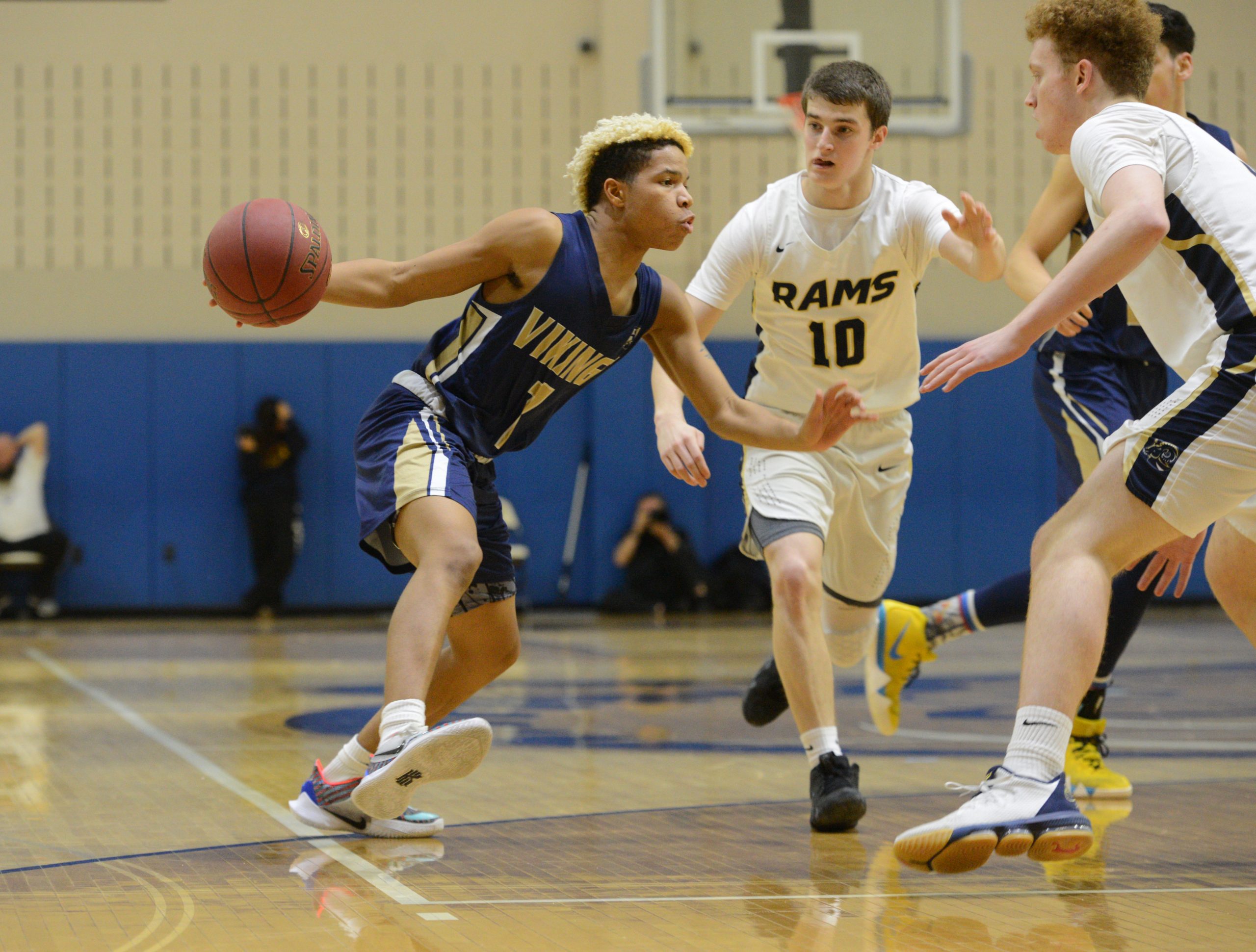 The Pioneer Athletic Conference boys basketball playoffs begin Wednesday at Spring-Ford High School. In the opening round doubleheader, No. 3 seed Spring-Ford plays No. 6 Upper Merion (6 p.m.) before No. 4 Phoenixville faces No. 5 Boyertown (7:45 p.m.).

The championship game will take place at Spring-Ford on Tuesday, Feb. 11 at 7 p.m.

Here is a look at Wednesday’s games:

Head-to-head >> Upper Merion defeated Spring-Ford, 80-77, in overtime Jan. 23 on a last-second 3-point shot by sophomore Collin Bowman, who scored 30 points in the game.

Playoff history >> Spring-Ford lost to Methacton, 87-51, in its PAC opener last season. This is the Rams’ fifth consecutive PAC playoff appearance, which has included three title game appearances in the last four years. Spring-Ford has won five league titles, the last of which came in 2015-16…Upper Merion returns to the league playoffs for the first time since 2016-17, when the Vikings lost to Spring-Ford, 57-46, in the semifinals after winning the Frontier. On Spring-Ford  >> The Rams shook off the loss to Upper Merion quickly, winning their final three games in dominant fashion, including a 72-54 victory over fellow playoff squad Boyertown in their finale to claim the Liberty Division’s second seed. Balance has been key for Spring-Ford this season as Tre Medearis (11.9 ppg), Patrick Kovaleski (11.7 ppg) and Zack Skrocki (10.3 ppg) have all taken turns leading Spring-Ford’s offense at times. Kovaleski is a 6-foot-3 slasher who can handle the rock and has expanded his game to the 3-point arc this season. Medearis is a very skilled forward with a soft touch and a sweet mid-range game whose length can also be disruptive on the defensive end. Skorcki has taken a huge jump from his sophomore campaign when he played big minutes for the Rams’ state playoff team and has one of the finest mid-range games in the league. Senior guards Michael Fitzgerald (8.5 ppg) and Tyler Scilingo (4.5 ppg) are two big-time shooters — 41 of Fitzgerald’s 53 field goals have come from 3-point range and 23 of Scilingo’s 28 baskets have come from distance. Jake Kressley (5 ppg) is a bruiser down low and Nate Santiago (3.6 ppg) is another 3-point specialist as 20 of his 23 field goals have come from deep.

On Upper Merion >> The Vikings did not look destined for the postseason after a loss to Phoenixville on Jan. 9 put them at 3-5 in the league and out of the Frontier race. Upper Merion rallied with five straight wins and won seven of its last eight games league games to find a spot in the postseason. In the process, the Vikings knocked off Spring-Ford in OT and snapped Pope John Paul II’s 11-game win streak, handing the Golden Panthers their only Frontier loss off the season. Like Spring-Ford, Upper Merion doesn’t have a dominant scorer; senior Ty Jones (10.5 ppg) and Nick Shepperd (10.3 ppg) are the only ones averaging double figures. Jones is a speedy guard who can get to the hoop and finish, while Shepperd is a versatile forward who can score inside and outside. Freshman guard Madison Tatom (8.4 ppg), who missed time at the beginning of the season, and sophomore Collin Bowman (7.4 ppg), a lefty sniper, have really turned things on down the stretch. Lukas Kim (6.6 ppg) is another shooter in the starting lineup, while the Vikings have gotten contributions from a number of others off their bench throughout the season.

Prediction >> Spring-Ford had been a pretty solid defensive team before giving up 80 points in the Jan. 23 loss to Upper Merion and has since seemed to regain its defensive footing. It’s hard to pick against the red-hot Vikings, but the Rams have more big-game experience as Kovaleski, Medearis, Skrocki, Scilingo and Fitzgerald all saw time during last year’s state playoff run … Spring-Ford 65, Upper Merion 59 Playoff history >> Phoenixville returns to the PAC postseason after a one-year hiatus. The Phantoms have two league titles but haven’t played in the PAC title game, since winning in 2006-07. … The Bears have never won the PAC. This is Boyertown’s first PAC playoff appearance since 2014-15 and just the second league postseason berth since advancing to the league title game in 2006-07.

On Phoenixville >> After the Phantoms missed out on the PAC postseason with a loss in their final regular season game in 2018-19, Phoenixville made sure to lock up its spot early this year. Phoenixville had a chance to earn a first round bye and a Frontier title, but fell to PJP, 63-51, in their regular-season finale Saturday. Phoenixville did not fare well against the league’s upper echelon during the regular season, but the Phantoms came within a possession of beating Spring-Ford and lost a single-digit contest to Boyertown. Senior point guard Steven Hamilton (13.8 ppg) has become one of the top guards in the league, and can shoulder the offensive load or act as a playmaker to set up his teammates. The emergence of junior Mike Memmo (13 ppg) gives the Phantoms a nice 1-2 scoring punch, while senior guard Will Allain (8 ppg) and sophomore forward Chris Weiah (7.4 ppg) are capable scorers as well. Senior Clay Kopko (5.9 ppg) is a high-energy player who does a little bit of everything for the Phantoms, while junior Kade Breisblatt (3.3 ppg) can get hot in a hurry from deep. Chase McDonnell, Zion Hopkins-Quinn, Jackson Kuranda, Milton Weiah and Zavier Mayo are a few others who could see action Wednesday. On Boyertown >> This is already the Bears’ best season since 2006-07, when the team won 20 games, and a win in the league tournament would add on to a number of “first in a whiles” for Boyertown. After a nine-game win streak from Dec. 12-Jan. 8, the Bears went on a three game-skid against Norristown, Methacton and Pope John Paul II, which also coincided with sixth man David Leh going out with an injury. Boyertown responded to the skid with a six-game win streak, including the team’s first win over Norristown since it joined the league, before falling to Spring-Ford, 72-54, in its regular-season finale. After missing about half of last season with an injury, junior Tre Diguglielmo, a 6-4 wing averaging 12.7 ppg, has become one of the league’s top scoring threats as a shooter with some size who can also hold his own in the post. Junior Aarick Salata (9.4 ppg), a three-year varsity contributor, runs the show at the point as a tough penetrator and willing passer, while seniors Mason Marinello (8.3 ppg, 33 3-point shots) and Alex Obarow (6 ppg) add some athleticism out on the perimeter. Big man Chris Kiefer (3.9 ppg) anchors the middle of the Bears’ 2-3 zone, which has held league opponents to an average of 43.1 ppg this season. Senior forward Kameron Metcalf (6-foot-7) and junior forward Ryan Schaeffer (6-foot-5) add some size off the bench, while sophomore Roman Marinello and senior Ryan Barnes give some depth at the guard position

Prediction >> Neither team impressed in their regular-season finales, still both squads have shown they are tough to beat when they are on their game. Pushing the tempo would likely benefit the Phantoms, as the Bears like to control the pace and run lengthy possessions. The Phantoms have the shooters to deal with the Bears’ 2-3 zone; however, Boyertown’s size could give Phoenixville fits on the glass. … Boyertown 55, Phoenixville 50