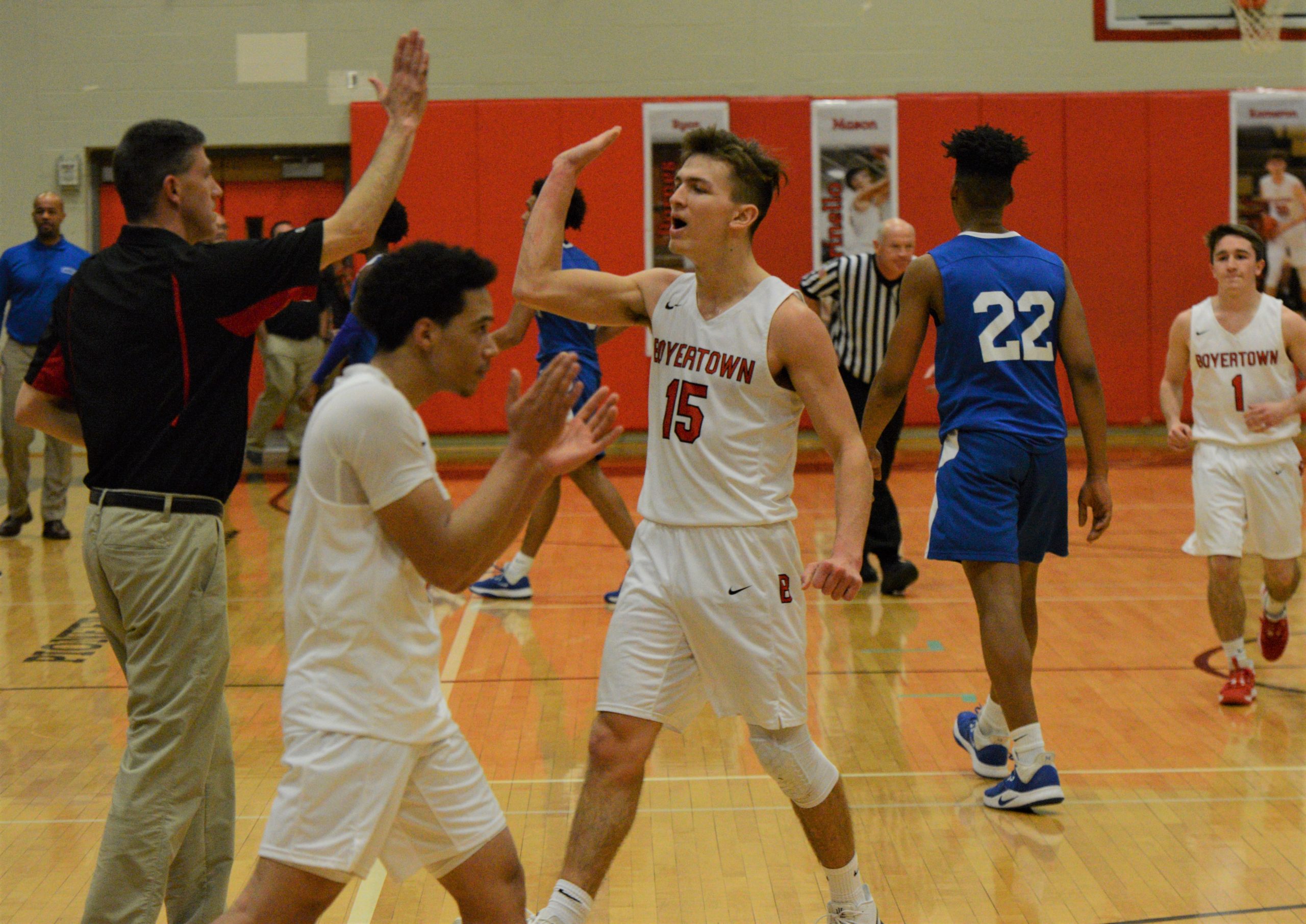 BOYERTOWN >> This has been a season of ‘first in a long times’ for the Boyertown boys basketball team.

A nine-game win streak in late December and early January — the Bears’ longest since 1976 — was the first major milestone. They added a Pioneer Athletic Conference playoff berth to the list with a win against Phoenixville earlier this week, booking a trip to the league postseason for the first time since 2014-15 and second time in 10 years.

Boyertown, which already has its most wins in 13 seasons, added another accomplishment to the list Thursday against Norristown, when the Bears held off a late Eagles run for a 52-44 Senior Day win.

It was Boyertown’s first win against their Pioneer Athletic Conference Liberty Division rival since Norristown joined the league in 2016-17, breaking a stretch of five straight losses that included a 50-44 loss Jan. 8.

“It’s kind of like mesmerizing in a way,” said senior Kameron Metcalf, reflecting on Boyertown’s season. “When you think of Boyertown, especially the other schools, they think of us as the knock over guys who ‘We’re going to come in and beat you guys up.’ This year it’s kind of the exact opposite. It’s kind of a surreal experience to be a part of this my senior year. We’re going to PACs, districts, won nine games in a row. It’s been something else.”

“We’re not surprised by what we’re doing out here,” added junior Aarick Salata, a three-year varsity contributor. “We all trust in each other, the coaching staff is good to us. We put the work in, and it’s coming out on top.”

Junior Tre Diguglielmo led the Bears (6-3 Liberty, 11-4 PAC, 16-5 overall) with 12 points on Thursday, while Salata and senior Mason Marinello followed with nine in a well-rounded effort. Norristown junior Willie Anderson scored 19 points, and Chris DiNolfi had 14 for the Eagles (5-5, 9-7, 10-10), who were eliminated from the league postseason by the loss coupled with an Upper Merion win on Thursday.

Marinello and Metcalf are part of a senior group that also includes Alex Obarow and Ryan Barnes. Obarow’s and-one midway through the fourth gave Boyertown a 43-37 lead after Norristown had cut a 38-28 third quarter advantage down to three. The Bears led by multiple scores the remainder of the game.

The senior group saw the program win just four total division games and finish with a combined record of 21-45 during their first three years at the school. Thursday’s Senior Night was a chance to celebrate the materialization of a vision created when they were sophomores.

“What’s special is that this group talked about this two years ago,” Boyertown coach Mike Ludwig said. “When they were sophomores, the guys who are seniors now, they had a really successful JV season. We talked about it with them at that time and said, ‘Guys, it’s going to be a lot of hard work, a lot of time and dedication, but if you stick together you can get to where you want to be.’”

“This group of kids has kind of stuck through some ups and downs and we’ve had some tough years,” he added. “But it’s built a lot of character in them and made them a kind of unified team. It’s nice to see them having success on the court.”

The Eagles are on the opposite stage of that process, rebuilding after finishing atop the Liberty Division the past two years. Anderson and classmate Nizer Kinney, who missed Thursday’s game, are the only Eagles who came into this season with significant varsity experience and neither was a starter last year.

Anderson, whose seven first-quarter points helped Norristown to a 15-8 start, scored seven points in the fourth quarter to chip away at a Boyertown lead built to double digits with a 10-0 run in the third.

The junior was the second or third player off Norristown’s bench during their run to the state playoffs last season, but he has become one of the league’s top scorers this year. Anderson’s 14.8 points per game ranked third in the league entering Thursday.

“Willie’s been a guy who has constantly grown over the past two years,” Norristown head coach Binky Johnson said. “His contributions the last two years have been overshadowed by some of the players that we have had, but he made major contributions prior to this year. Actually this year was a huge bust out year that we expected and he’s followed through with it.”

Boyertown, currently ranked No. 9 in District 1-6A, will finish off its regular season Saturday against Spring-Ford with an outside chance at jumping into one of the top eight spots and the first round bye that comes with it.

After that the Bears will turn their attention to the PAC playoffs starting next Wednesday. Boyertown hasn’t won a postseason game of any kind since the 2006-07 squad that won 20 games and lost in the league championship.

So while it was nice to finally get a win against the Eagles, the Bears are now focused on what lies ahead.

“It’s another accomplishment to the list, but the list is going to keep growing soon after this,” Metcalf said. “This isn’t the last accomplishment I don’t think at all. We just have to move onto the playoffs and see where that goes.”

“We haven’t been to the playoffs in a long time,” Salata added. “ I’ve never been there myself as a player. I don’t think anyone else has. For this group of guys to get together, believe in each other and get there as a team is special for us.”

Norristown enters Friday ranked as the No. 22 team in District 1 Class 6A, which invites 24 teams to its postseason tournament. A win against Harry S. Truman on Saturday would secure a fourth straight district playoff appearance for the Eagles.

That could be a big step for a team made up of mostly first-year varsity players.

“It would be huge for us to get into districts,” Johnson said. “We’re teaching this young group every aspect of what varsity basketball is like from preparation, warm-ups, scouting…They’re figuring out aspects of scouting, how much bigger, faster, stronger everyone is.

“They’re figuring out that chemistry means a lot, playing together means a lot. Now getting to experience that this year, that they were able to grasp it, is going to be a huge step for them, especially if we make the districts. If we do get in that will be a notch in their journey together as a young team.”