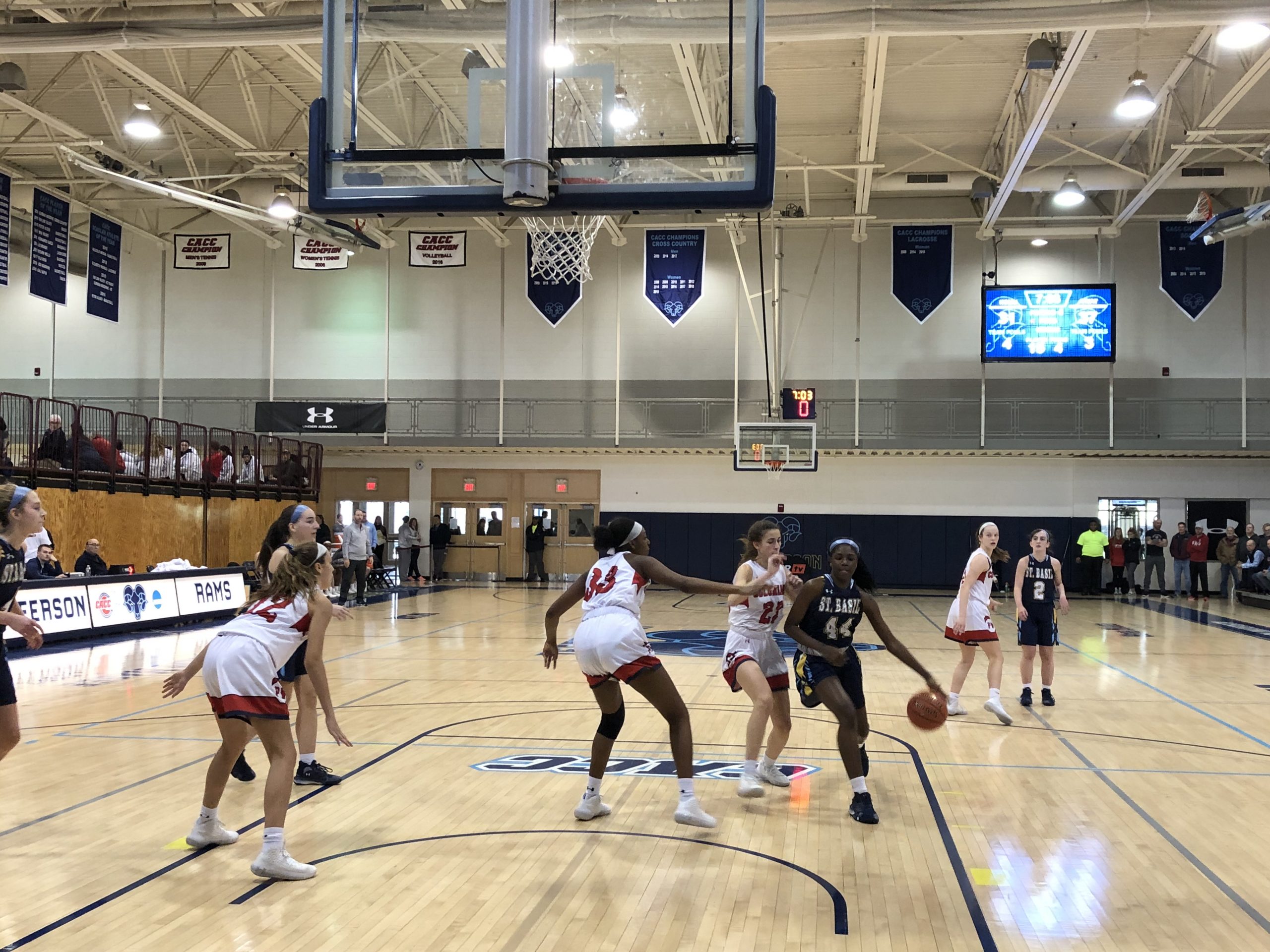 PHILADELPHIA >> Plymouth Whitemarsh’s girls basketball team has thrived playing its own pace all season and St. Basil Academy knew it.

The Panthers knew if they were going to hand the Colonials their first loss of the season, they’d have to play the game their way and limit how often PW got up and down the floor. Defense has fueled PW all season, but it’s also St. Basil’s calling card and when the Panthers needed points, they had Denae Carter.

St. Basil slowed PW and some big plays from Carter late to end the Colonials’ unbeaten season with a 47-44 win at Jefferson University as part of the Play-By-Play Maggie Lucas Classic.

“Our girls did a great job following our gameplan,” Panthers coach Terry Mancini said. “We wanted to get them into a halfcourt game, which is what we did. They’ve been scoring in the 70s so for us to do what we did today, it was a team effort and a testament to the girls on my team.”

The first half was a foul-fest as the two teams combined for 22 fouls, 14 going to the Panthers, who had three starters with three personals by halftime. PW (17-1, 10-0 SOL American) only made three baskets from the floor in the half, but their attacking of the rim helped them get 23 free throws before halftime.

Normally a man-to-man defensive team, the Panthers (17-2, 12-0 AACA) began to mix in their matchup zone defense both as a way to protect players from more fouls but also to keep PW guessing. St. Basil senior co-captain Lizzie Deal was one of the three starters in major foul trouble, but she said her teammates weren’t getting frustrated with the high-volume of whistles.

“We were told they’re a fast-breaking team so we needed to get back and if we weren’t on our girl, just pick up who we could and keep them in front of us,” Deal said. “We know sometimes it doesn’t go our way but we rely on each other and if we can execute on offense, we can always get back in the game.”

Gabby Cooper hit a three to give the Colonials a 16-13 lead, with the next eight PW points coming via the foul line for a 24-13 edge with 2:39 to go in the first half. Despite being up double-digits on the scoreboard, the game wasn’t going the way Plymouth Whitemarsh hoped it would.

Despite their best efforts, the Colonials’ full court defense wasn’t getting the turnovers that fueled their recent offensive outbursts and even with traps and double teams flying at St. Basil players, they didn’t get sped up or out of sorts.

“We knew they would come after us with pressure and they were really good with double-teams,” Carter said. “We had to fight through the double teams and keep making the extra pass.”

PW’s start to the season in some ways masked how inexperienced the team is. There are no seniors on the roster, two freshmen play prominent minutes and against a battle-tested team that wasn’t going to panic, the youth showed a little bit

“While this team gained some experience last year in the playoffs, today out there showed how far they still have to go,” Colonials coach Dan Dougherty said. “It’s something we practice but the kids need to take a little more ownership of what we’re going to do. It’s no fault of theirs but our level of competition the past few games hasn’t been that high of a level and then you step on the floor against a team like Basil, it’s hard to flip that switch.”

Carter couldn’t buy a bucket in the first half but the junior said she stayed confident and kept shooting because at some point, they would start to fall. She would jumpstart the Panthers rally, but not with scoring.

St. Basil closed the first half on an 8-0 run, with Carter assisting treys from Shannon Remolde and Denae Carter to end the second quarter. The Panthers carried the momentum through the break, scoring the first 11 points of the third with Carter supplying four points and two more assists.

“It was a team game and we ran our offense until we could get the open shot,” Carter said. “We made the extra pass and all crashed the boards, so that made it easier and on the defensive end, we continued to get back and stop their shots.”

A fourth foul put Carter on the bench after the big run and St. Basil only scored three points over the final four minutes of the frame but they still led 37-31 going to the final stanza. Samantha White, who scored all 10 of her points in the second half, kept her team afloat until Carter returned for the finishing spell.

After playing the willing passer in the third, Carter went to attack mode in the fourth and ended up scoring the last eight points of the game for her team.

“It’s what she’s been doing lately and it’s good to have a player like Denae on your team,” Mancini said. “That’s her instincts. She’s only going to get better, which is the great thing about her. She has a great motor, she’s a great kid, smart and whichever college gets her is going to get a great player.”

Dougherty saw Carter’s impact on the second half in his team’s defensive intensity.

“They were watching her a little too much,” Dougherty said. “She’s a super-talented player but too often when she was dribbling, four kids are just watching her and the kids on their team wanted it more. They came in and got rebounds over us.”

PW hosts Abington and Upper Dublin in an important week of SOL American games and Dougherty’s message postgame was Sunday was the type of competition the Colonials will see in districts and the state tournament.

Having to use timeouts earlier in the game finally caught up to the Colonials as they made a late push to get back in the game keyed by two 3-pointers from Abby Sharpe.

Being a 3A program that plays in a small but difficult league in the AACA, St. Basil sometimes goes under the radar but it’s a program that’s won its league title and District 1 title the last three seasons.

“It sounds good for the program considering they were undefeated and we’re now their only loss,” Deal said. “It puts a good name on the program and makes all the girls feel really good.”

“I think it just shows the type of program we have and the caliber of kids in our program,” Manicni said. “They’re smart basketball players, they’re tough and they do what they have to do to win a basketball game.”