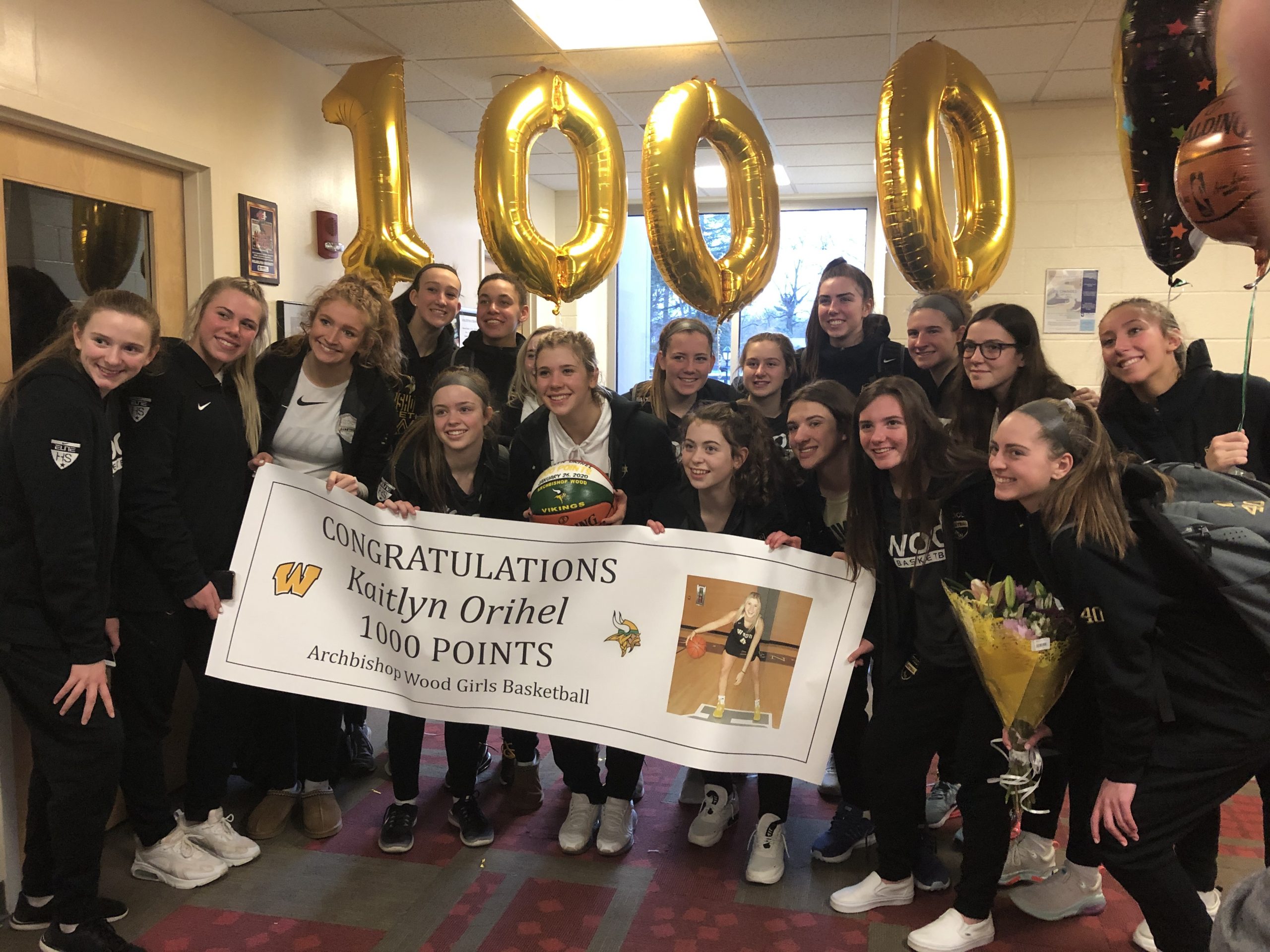 PHILADELPHIA >> If there’s a play that sums up all Kaitlyn Orihel is about, it would definitely be a driving layup with a whistle for the and-one.

Orihel never shies from contact, she relies attacking the defense and knows the lift a play of that nature gives not only to herself but every one of her teammates. It’s probably Orihel’s signature play and in the most fitting of natures, the one she scored her 1,000th point on.

Archbishop Wood’s standout junior surpassed the milestone in Sunday’s 59-53 win over Archbishop Carroll on Sunday, a reward for untold hours put in with nobody watching.

“I had one earlier in the game, so it was nice to get another one,” Orihel said, holding a ceremonial 1,000th point ball. “It hasn’t really hit yet. It was unreal for me coming into it, this was always a goal for me starting my freshman year.”

Orihel noted getting a win Sunday was more important, with the game being a PCL Red Division game carrying PCL and PIAA implications. Her mentality wasn’t any different than usual, take the open shots that are there but don’t force things if they aren’t.

The guard only needed 10 points at the start of play but missed a couple open jumpers in the first quarter. An and-one, her first of the game, helped get her halfway there by halftime and once the third quarter started, Orihel was in attack mode.

Carroll had done a nice job slowing up Wood in the first half but with Orihel attacking the bucket, shots started to fall.

“We were down one, I saw in the first half I could get to the rim, so we wanted to get the lead and build on it,” Orihel said. “That was really our goal in the second half.”

Already a two-time All-PCL pick and twice named all-state, including a first-team selection last year, Orihel established herself right away as a foundational piece for the Vikings. Wood coach Mike McDonald said that’s part of the reason why she was able to get 1,000 points in less than three seasons, but it also owes to her work ethic.

While Orihel is part of the Philly Belles AAU program, she and her Wood teammates still found time to work out two or three times a week together over the summer.

“They’re so great and so supportive,” Orihel said. “We all share the ball when we’re open. They were so supportive throughout the game.”

Once Orihel hit the mark, before the free throw, the Vikings gathered for a quick celebration then got right back to work. Senior Izzy Larsen told Orihel the ride home wouldn’t feel as good without a win and it was all the motivation the junior needed to get her focus back.

Orihel ended up scoring 10 points in the third quarter and led Wood with 19 points.

For all the big game performances so far, most recently a 32-point effort in a win against Neumann-Goretti, there are hours and hours of work behind them. McDonald said that’s what people tend to lose focus of when players hit milestones and in turn, Orihel said her coach putting so much confidence in her early has driven her to work even harder.

“I knew I would be a big part of this team, so I wanted to live up to it,” Orihel said. “It just feels really good.”

Now, she and her teammates can turn their attention on winning a PCL title at the Palestra and then going on to chase a state title, both trophies Orihel has played for but is yet to claim.

Orihel emerged from the basement at Jefferson and walked out into a hallway crammed full of family, teammates, family of teammates and plenty of other well-wishers for an ovation.

“Going in the gym for practice every day, seeing the banner up there and knowing my name’s going to be added to it, it’s unreal,” Orihel said.