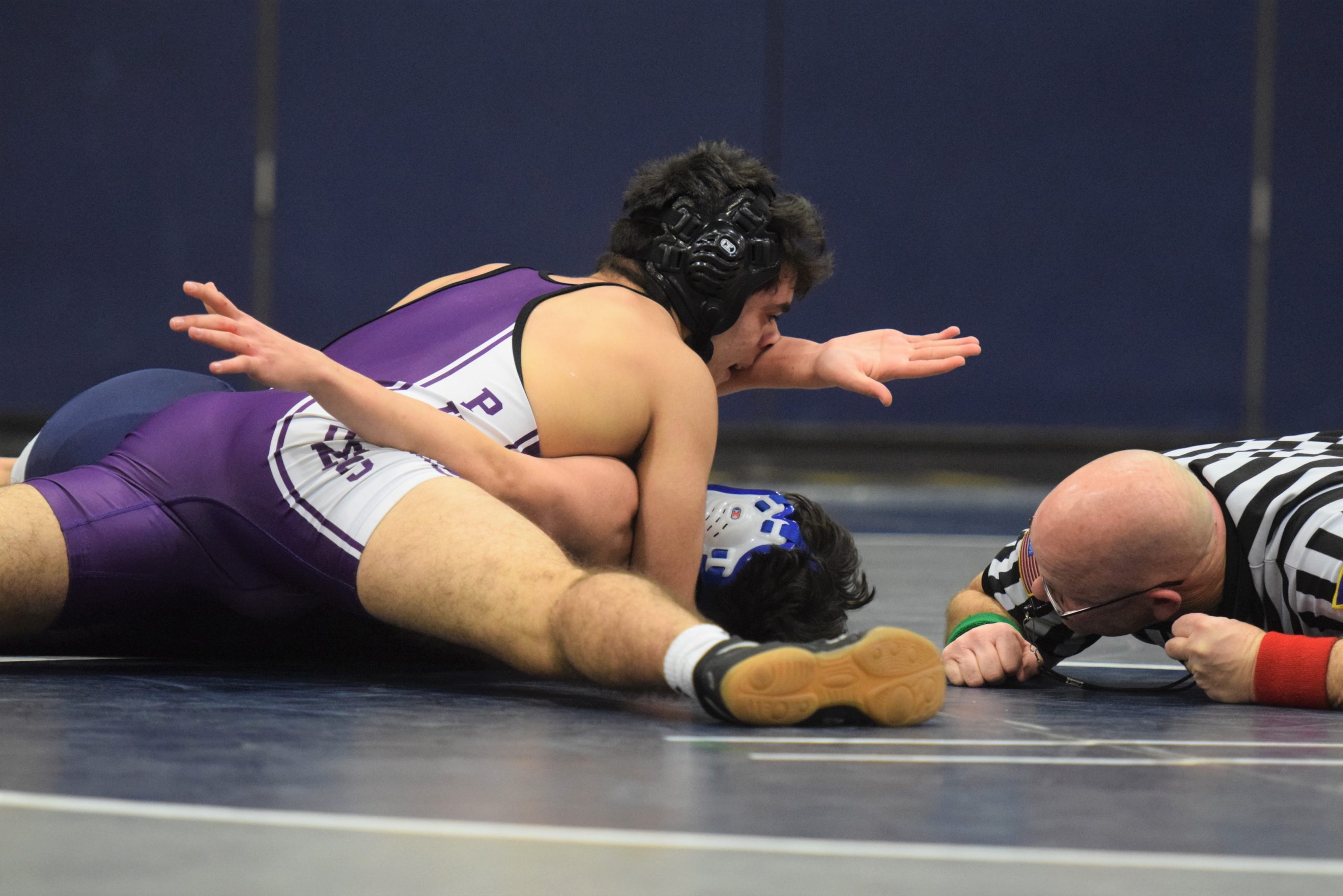 Shoemaker Scuffle >> Phoenixville made a strong showing at the duals tournament hosted by Radnor Saturday. The Phantoms rebounded from a 32-31 loss to Academy Park with victories over Radnor (44-33) and Twin Valley (72-12) to finish fifth in the eight-school competition.

Back-to-back drops by Avery Shivak (195) and Zach Van Horn (220) — they were both scored in the first minute — erased the 33-24 lead Methacton built off pins by Matthew Blakemore (152), Roman Moser (170) and Joshua Cancro (182) sandwiching Brody Borkowski’s decision at 160. Pottsgrove used early falls from Christian Drager (113) and Trenton Allen (120) to score 18 unanswered points at the start, before Osvaldo and Edgard Carbajal scored pins at 126 and 138.

Coal Cracker >> Blake Fisher had the best showing for Pope John Paul II during the tournament hosted by Lehighton this weekend.

Fisher, one of three Golden Panthers to advance to fourth-round consolations, went 2-2 at 285 with a pair of pins. Cole Miller (120) and Matt Delcitto (160) both went 1-2 while also advancing to the fourth-round consis.

The Hill School got more than just a victory Saturday.

With their 55-39 win over Mercersburg Academy, the Blues claimed the top seed for the upcoming Mid-Atlantic Prep League boys basketball tournament. They will have home-court advantage for the Feb. 7-9 competition, serving as host team.

The Blues (4-0, 13-5) used a stifling first-half defensive effort to build a 27-15 halftime lead, behind seven of Daniel Nixon’s 12 points; Nixon finished with a double-double, pulling down 10 rebounds. Mercersburg got no closer than six points in the third quarter, and Hill pushed back to a 40-30 advantage entering the fourth.

Gabe Dorsey, after sitting out most of the first half in foul trouble, scored 12 of his game-high 18 points in the second half to propel Hill to victory. Zach Lezanic added eight points and eight assists, Caleb Dorsey had similar stats in a similar sitution.

The win was the sixth straight for the Blues.

Wilson 75, Daniel Boone 20 >> Evin Timochenko had 17 points and Josh Valle 12 for the Bulldogs in their Berks Conference win over the Blazers Friday.

Perkiomen School 73, Lawrenceville 65 >> Coming off a 60-57 loss to the number-14 team in the country (Mt. Zion), Perkiomen hit the road Friday and defeated the Larries.

Pennridge 55, Perkiomen Valley 37 >> Opening a 25-13 lead in the first half Saturday, the Rams cruised to victory over the Vikings in their non-league game.

Tyler Lapetina scored 12 points to lead PV, which trailed by a 41-23 margin heading into the fourth quarter.

Pottstown 61, Emmaus 51 >> The Trojans broke a five-game skid with a non-league victory Saturday.

Robert Burress (22) and Tre’ Bass (19) combined for 41 of Pottstown’s points. Donovan Towson joined them in double figures with 12 points.

Up 19-16 at halftime, the Blues put up 18 points in the third quarter — while holding Mercersburg to 10 — to take control of the game. Cynthia Williams had five of her game-high 18 points during that stretch while Aine Farrell and Courtney Bodolus added nine points apiece in the game.

Pennridge 66, Pottsgrove 49 >> With three players scoring in double figures, the Rams pulled away from the Falcons in the second half of Saturday’s non-league game to emerge victorious.

Pottsgrove, which trailed Pennridge in the first half 28-22, got 14 points from Sydney Mowery and 10 from Rachel Ludwig.

Central Bucks East 53, Perkiomen Valley 29 >> Emily Chmiel scored 20 points and Mia Salvati had 17 points for the Patriots as they defeated the Vikings in a non-league game moved from East’s main gym by a leaky roof from Saturday’s heavy rains.

The leading scorer for PV was Lindsay Hartman, who scored nine points off three 3-point goals in the second half.

Kennedy scored a team-high 15 points while pulling down 10 rebounds. Tess Crossan came up short of her own double-double, clearing 13 boards alongside nine points.

Methacton 47, Lower Moreland 27 >> Nicole Timko and Sydney Tornetta were the stars for the Warriors as they rolled the Lions in Saturday’s non-league action.

Timko retained her scoring spark for Methacton, a game-high 19 points secured by making five 3-point goals. Tornetta used a 13-point outing to maintain her charge toward the 1,000-point plateau while adding seven rebounds.

Wyomissing 49, Daniel Boone 32 >> Lily Seyfert had 21 points and Abby Doyle had 14 points to lead the Spartans over the Blazers in Saturday’s Berks Conference pairing.

Allyson Boyer had 15 points to finish as Boone’s scoring leader.