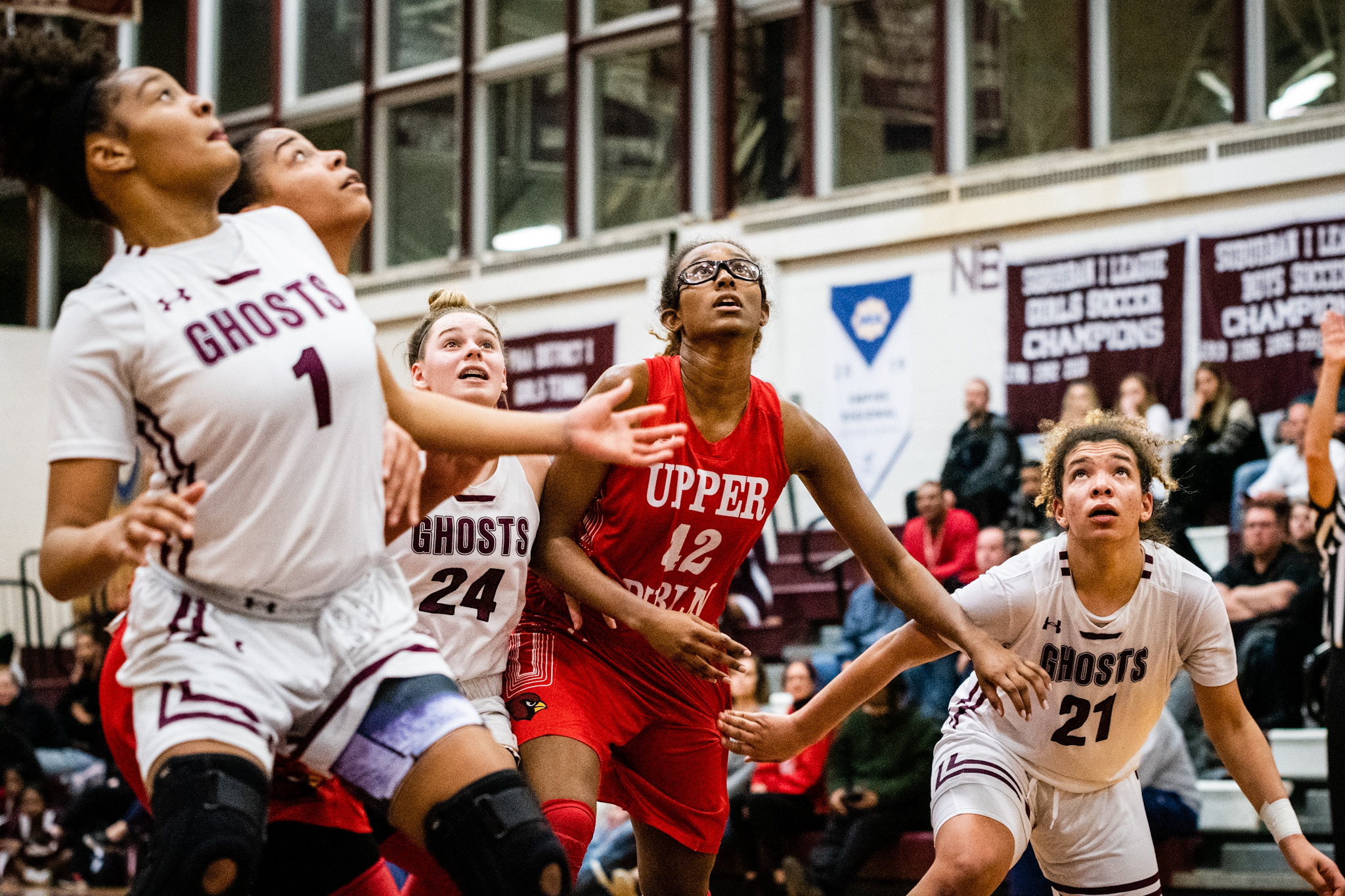 Friday night’s meeting between the two was also a pretty good summary of the Cardinals season to this point with some head-scratching and some of what’s made the program one of the most consistent in District 1 in recent years. After a lackluster defensive first half, UD locked down in the second half.

With Bliss Brenner leading the way in the fourth, UD got back to basics and took down the Ghosts 43-36.

“There’s always been that competition with Abington, every time we play them, they seem to bring their best game,” Grebe, a senior forward, said. “We seem to bring out the best and the worst in each other, so I think the most important thing when we play them is to stick together and communicate.”

It’s not something he’s seen enough of this season, save for a few stretches here and there and it was absent again in the first half Friday night. Abington (8-9, 6-4 SOL American), while young, is a talented offensive team and Upper Dublin wasn’t doing enough to make things tougher on the Ghosts.

“I don’t know if we’ve been trying to be somebody who we aren’t all year but we don’t get style points for what our games look like, we usually just get wins,” Funsten said. “This year, I think we’ve gotten away from some things we’ve done really well in the past. We need to get back to that, we’ve seen what this group is capable of when we play the way we need to play.”

Offense wasn’t a problem in the first half, with the Cardinals putting up 27 points but they just couldn’t stop Abington from doing the same. The Ghosts, led by a great first half from Jaida Helm, led 28-27 at the break and were able to get to the rim and find open shots with relative ease.

Abington entered the night No. 22 in the District 1-6A power rankings but are still in the mix to get into the postseason.

“We’ve been in a couple games like this where you hope the experience starts to pay off either later this year or next year and we start to win these games and understand how to execute down the stretch,” Abington coach Dan Marsh said. “I didn’t think we did that, you have to give credit to Upper Dublin, they took away a lot of what we wanted to do but tonight was a lot better than we’ve been doing.”

The half was a chance for Upper Dublin to reset defensively and the Cardinals were nearly airtight after halftime, allowing just eight points combined in the third and fourth quarters.

A timeout Funsten called early in the frame was a chance to reset offensively. Jess Polin hit a three to put UD up 32-30, but the Cardinals missed their next five shots, all threes and many of them coming rather quickly into the offensive possession.

Abington’s Khalis Whiting (30) gets tangled up with Upper Dublin’s Jackie Vargas (42) with a loose ball under them in a game from Friday, Jan. 24, 2020. (James Beaver/For MediaNews Group)

Defensively however, the visitors were locked in with Brenner giving them a needed lift. A sophomore guard, Brenner played most of the second half and split her time on the floor guarding Ghosts sharpshooter Amanda Jackson or dynamic point guard Khalis Whiting.

“When our offense goes bad, we start relying on our defense more and we started communicating better,” Grebe said. “We focused on getting stops and that’s kind of our motto.”

Brenner snapped UD’s scoring drought with an inside hoop to put the Cardinals up 34-30 but the sophomore’s biggest impact would come in the final frame. After the Ghosts cut the lead to three going into the fourth, Brenner hit back-to-back 3-pointers to give UD a nine-point cushion.

An early-season injury to Anajae Smith meant Brenner had to take on more minutes and a bigger role early and it paid off on Friday. She put in the work on the offensive side of her game and that confidence showed as she took and hit two pivotal shots.

“I’ve been working on my perimeter shot for a while, I worked on it a lot over the summer, so tonight was the first time I shot and was ready to shoot,” Brenner, who also starts for UD’s girls soccer team, said. “It went in, so it was good.”

GIRLS BASKETBALL: @LadyGhostsBB @khalismikal draws the defense and kicks to Jaida Helm for a jumper Q3 against Upper Dublin pic.twitter.com/f2u3VcZ11Z

The shooting wasn’t the extent of Brenner’s impact. With a minute left and down five, Abington had to foul and put the Cardinals into the bonus. While UD missed the first free throw, Brenner took advantage when a Ghost player was slow to box out, grabbing the offensive board and getting the ball to Sarah Eskew who got fouled and made two at the line.

“She’s been one of our most consistent players because of what she brings defensively,” Funsten said of Brenner. “She showcased her game a little more offensively. She’s good attacking the basket and she’s worked on her outside shooting so we’re excited she’s becoming more of a complete player. She was already there as a defender, ballhandler and distributor and now she’s made some key baskets for us this year.”

The result wasn’t what the Ghosts wanted but Marsh saw a lot of positives in his team’s effort Friday night. He thought the defensive effort was good, his team never played out of control and the offense generated some good looks that just didn’t go down.

Abington’s goal is to finish in the top 24 of the district rankings and Friday’s effort is the kind they’ll need to do it.

“We were in it, we had opportunities against what’s in my opinion, one of the best teams in the district, I don’t care what their record is,” Marsh said. “We know if we can compete here, we can compete with anybody, it’s just a matter of making sure we put it together.”