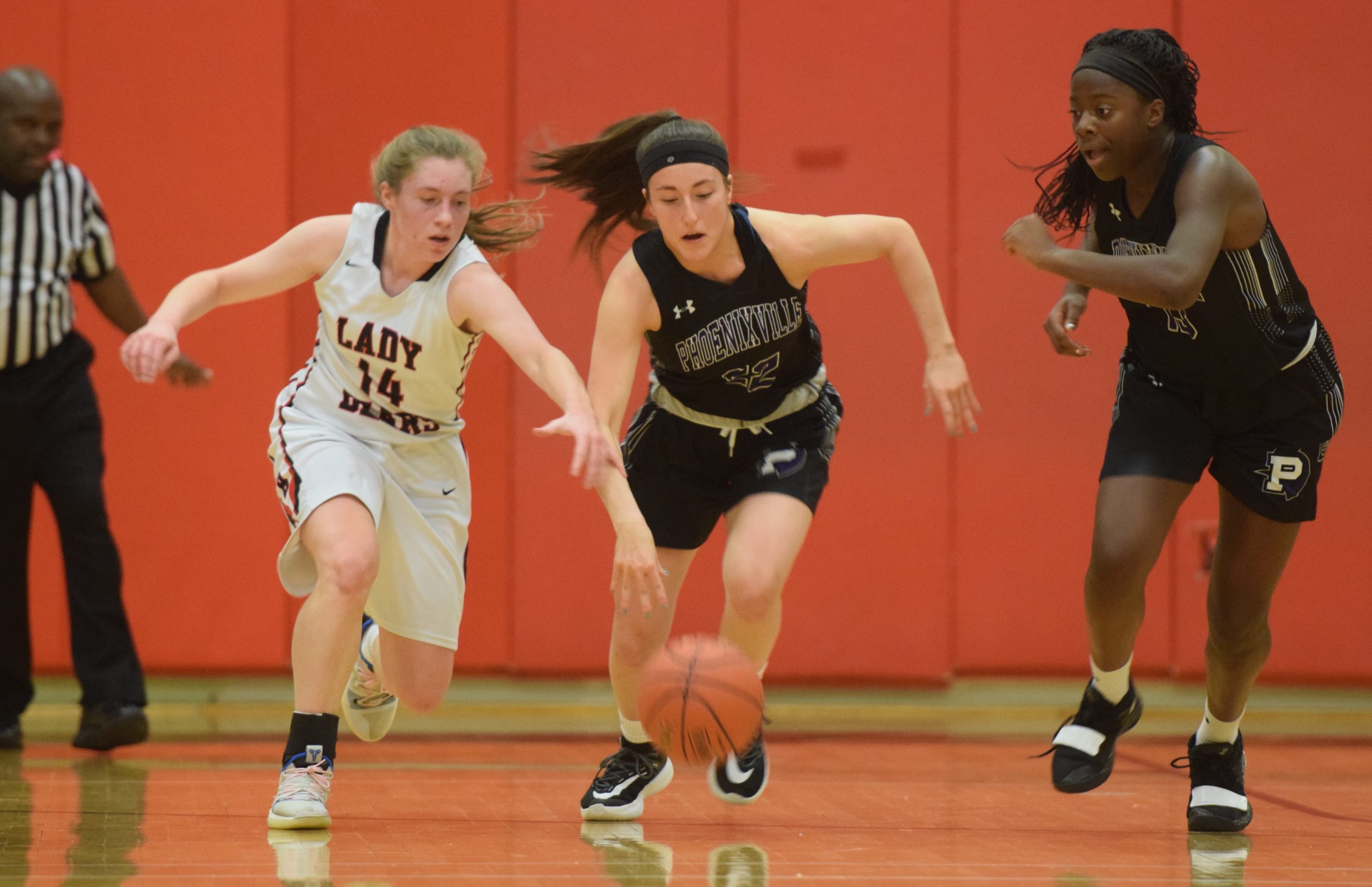 BOYERTOWN >> Two teams battling for Pioneer Athletic Conference girls basketball playoff berths faced each other Thursday night when Boyertown hosted Phoenixville, and it was the Bears who took an important step toward that goal with a 51-32 win.

“It was really important,” said Kapp, who knocked down a pair of 3-point shots as the Bears scored 11 straight points after Nailah Green (7 points, 6 rebounds) opened the night’s scoring with a basket off an assist by Williams. “We definitely needed to play good defense and we definitely needed to rebound.”

The intense Boyertown defense forced seven Phoenixville turnovers in the opening three minutes and nine in the first quarter as the Bears opened up a 14-6 advantage. Then the Bears scored the first six points of the second period on a 3-pointer from the left wing by Smith, a baseline jumper by Avery Sweisfort and a free throw by Kapp, and the lead was up to 24-8 by midway through the quarter.

“I think we came out with good intensity on defense,” said Bear coach Jason Bieber. “We focused on boxing out. Green is very athletic inside. And Williams is also very good at rebounding. The way we were going to struggle tonight was if we didn’t rebound. We did an excellent job, especially in the first half.”

Phoenixville scored the first four points of the second half to cut the lead to 29-17, but Smith swished a 3-point shot from the right corner off a pass by Mikayla Moyer (6 points, 4 rebounds) and Boyertown boosted its lead to 39-21 heading into the final quarter.

Emily Hillegas scored seven for the Bears on 7-for-10 shooting from the foul line and Amber Marburger pulled down a team-high seven rebounds coming off the bench. Aubrie Breisblatt had eight points and six rebounds for Phoenixville, which came into the night tied for second place in the Frontier Division with Pope John Paul II.

The Bear defense forced 29 turnovers, 18 of them in the first half.

“I think communication was a big thing,” said Kapp. “We needed to know where their shooters were and who was boxing out for us to get our offense started.”

Both teams committed 23 fouls, but neither side was able to make the most of their trips to the line. Boyertown shot 22-for-36 from the stripe and Phoenixville hit on just 13 of 27 free throw attempts.

“Early in the season as a team we were shooting 75 percent and now we’re down to 64 percent,” said Bieber. “That’s just mental focus and making sure we’re ready to go at the line.”

Boyertown also had trouble hanging onto the ball, committing 21 turnovers of its own. But the Bears, who are out of contention for one of the top two places in the Liberty Division, played well enough to put themselves into good position for a PAC wild card spot and also stay where they need to be for a District 1-6A berth (currently No. 22).

“Tonight was a big key to that,” said Kapp.

“Kapp’s shot was better tonight and it was good to see her aggressively driving to the basket,” said Bieber. “Smith shot well. And Emily Hillegas played really well, probably her best game of the season.”

Phoenixville is on the edge of the 16-team District 1-5A field as the No. 16 ranked team. The Phantoms have more avenues into the PAC playoffs as they battle with Pope John Paul II for the second Frontier spot (teams meet head-to-head Feb. 3) or final wild card spot.