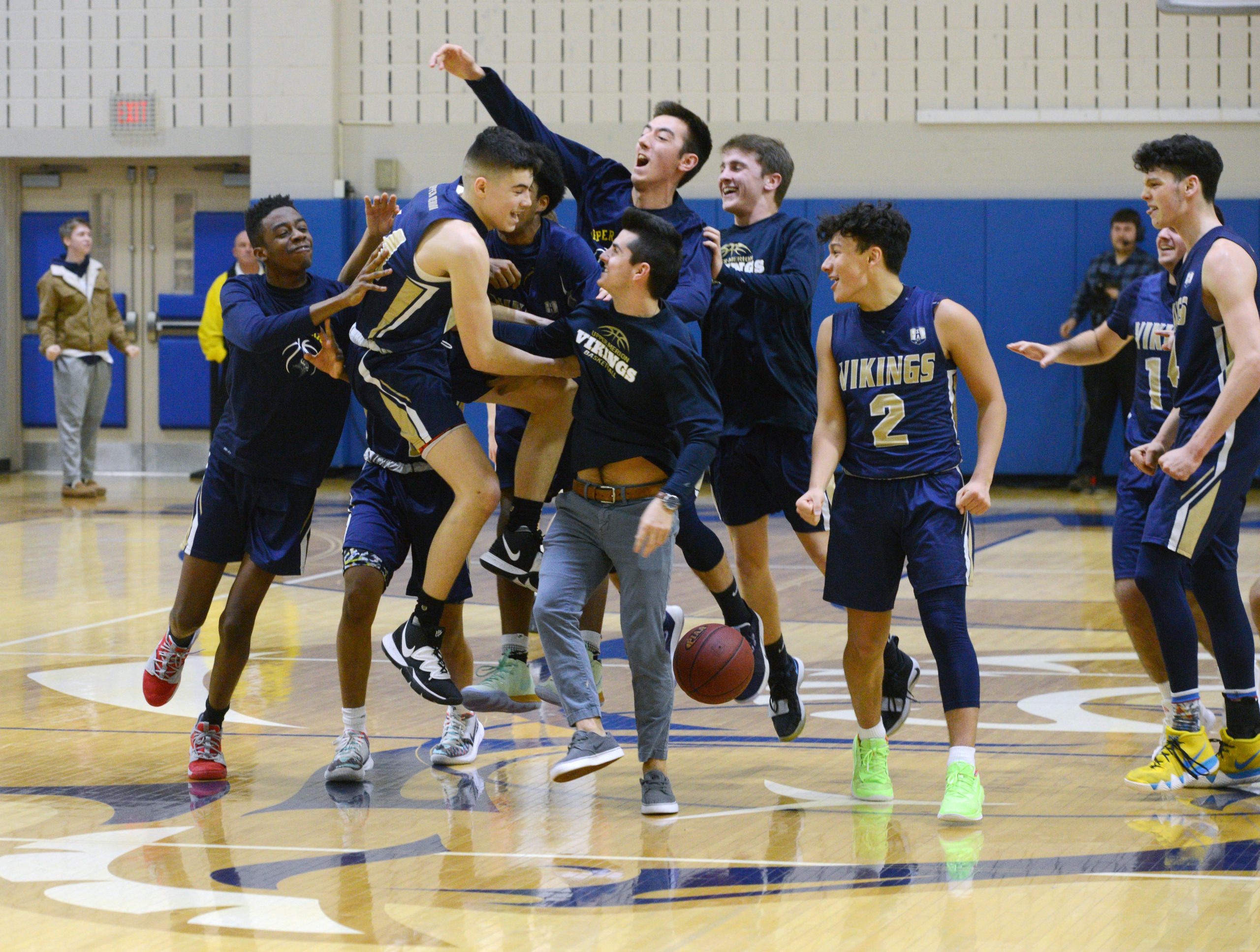 ROYERSFORD >> After returning its entire starting five, Upper Merion entered the 2019-20 campaign with hopes of competing for a Pioneer Athletic Conference Frontier Division title and being a factor in the District 1-5A playoff field.

Just two games into the season the Vikings lost senior Chris Clark for the season with a knee injury and several others missed significant time soon after with their own ailments, leading to a 3-6 mark entering the new year.

Upper Merion started to get healthy in early January, and over the last two weeks the Vikings have righted the ship with victories over Norristown, Perkiomen Valley, Upper Perkiomen and Pottsgrove, bringing a four-game win streak into Thursday’s PAC crossover contest with Spring-Ford.

As part of a career-high 30-point outing, sophomore Collin Bowman knocked down a three in the final seconds of overtime to extend that streak to five games with an 80-77 overtime win over the Rams.

FINAL: Upper Merion 80, Spring-Ford 77…Collin Bowman with a three to win win it in OT for the Vikings who have won five straight, including three crossover wins. pic.twitter.com/4PWyEAHfcF

With 7.4 seconds remaining in overtime Thursday, Upper Merion inbounded the ball underneath the basket on the offensive end of the floor. Shepperd passed to Jones out of a double team. Jones’s drive toward the rim was stopped, but he found Bowman open behind the arc.

Like almost every other shot that left Bowman’s hands on Thursday, the ball went through the basket, hitting nothing but net.

“Me and Ty have a lot of chemistry,” said Bowman, who hit seven threes. “We play AAU together. I said, ‘Ball, ball, ball,’ and he immediately passed it to me. It’s crazy. He’s my guy, and it was a perfect pass. I just had to finish it.”

Spring-Ford, which entered Thursday with an opportunity to lock down a PAC playoff berth for the fifth straight year, hit plenty of big shots of its own in the fourth quarter and overtime, which featured five lead changes and four ties.

After Shepperd, who stole the ball on the Rams’ last possession of regulation, opened the OT period with a bucket, Rams’ senior Tyler Scilingo drilled a three to give Spring-Ford a 72-71 lead. Scilingo, who also knocked down a big three late in regulation, forced a steal on the next possession, setting Skrocki up for a score to put the Rams ahead 74-71 with two and a half left in OT.

Jones converted a tough layup to pull Upper Merion within one, 74-73, with 2:06 to go. Shepperd came away with another steal and scored on the fast break, and Tatom knocked down a pair of free throws to give the Vikings a 77-74 lead with 26.4 seconds to go.

The Rams responded once again. This time junior Nate Santiago knocked down a three to tie the score, 77-77, with about 20 seconds left on the clock. Spring-Ford forced an Upper Merion miss, but couldn’t come up with the rebound and a jump ball gave the Vikings possession, setting up Bowman’s heroics.

Michael Fitzgerald had 12 points on four threes, and Patrick Kovaleski had 11 to round out the Rams’ double-figure scorers.

“We’ve got a lot of shooters,” Scilingo said. “It’s awesome, a great asset, it helps us win games. But you gotta come down to the wire and win them.”

The Rams’ defense has been a strength throughout the season. Spring-Ford had given up more than 70 points in a league game just one other time in a loss to Methacton on Jan. 16. Only two other PAC teams — Norristown scored 52 on Dec. 10 and Phoenixville scored 61 on Jan. 11 — have been able to score in the 50s against them this season.

Spring-Ford is tied with Boyertown for second in the Liberty division and has a one-game edge over Upper Merion and Norristown in the overall league standings. The Rams will hope to regain their defensive form as they finish with a crossover contest against Upper Perkiomen on Monday and Liberty games against Perkiomen Valley and Boyertown.

“We just have to work on it in practice,” Scilingo said. “Miscommunications, get on those switches and everything. Miscommunication is all it really is.”

Nick Shepperd steal and fastbreak score on other end. Upper Merion up 75-74 with 26.4 seconds left and have ball after Spring-Ford miss. pic.twitter.com/4ZXGYpYKi2

While they looked to be in the midst of a disappointing season not too long ago, the Vikings have played themselves into the PAC playoff picture over the past few weeks and are inching toward a District 1-5A playoff berth.

Upper Merion entered Thursday as the last team out of the PAC and District 1-5A playoff fields and will need to continue their strong finish to earn a spot in both tournaments. The Vikings finish their league slate against Methacton, Pottstown and Pope John Paul II before non-league games against West Chester Henderson and Devon Prep.

“It was real tough,” Jones said of the team’s struggles early this season. “The lineups, we were trying to fix them up. A lot of people were going down at the beginning of the season. We’re just adjusting, playing ball now, just rolling.”

“We just want it more,” Jones added. “We’ve got more to fight for.”