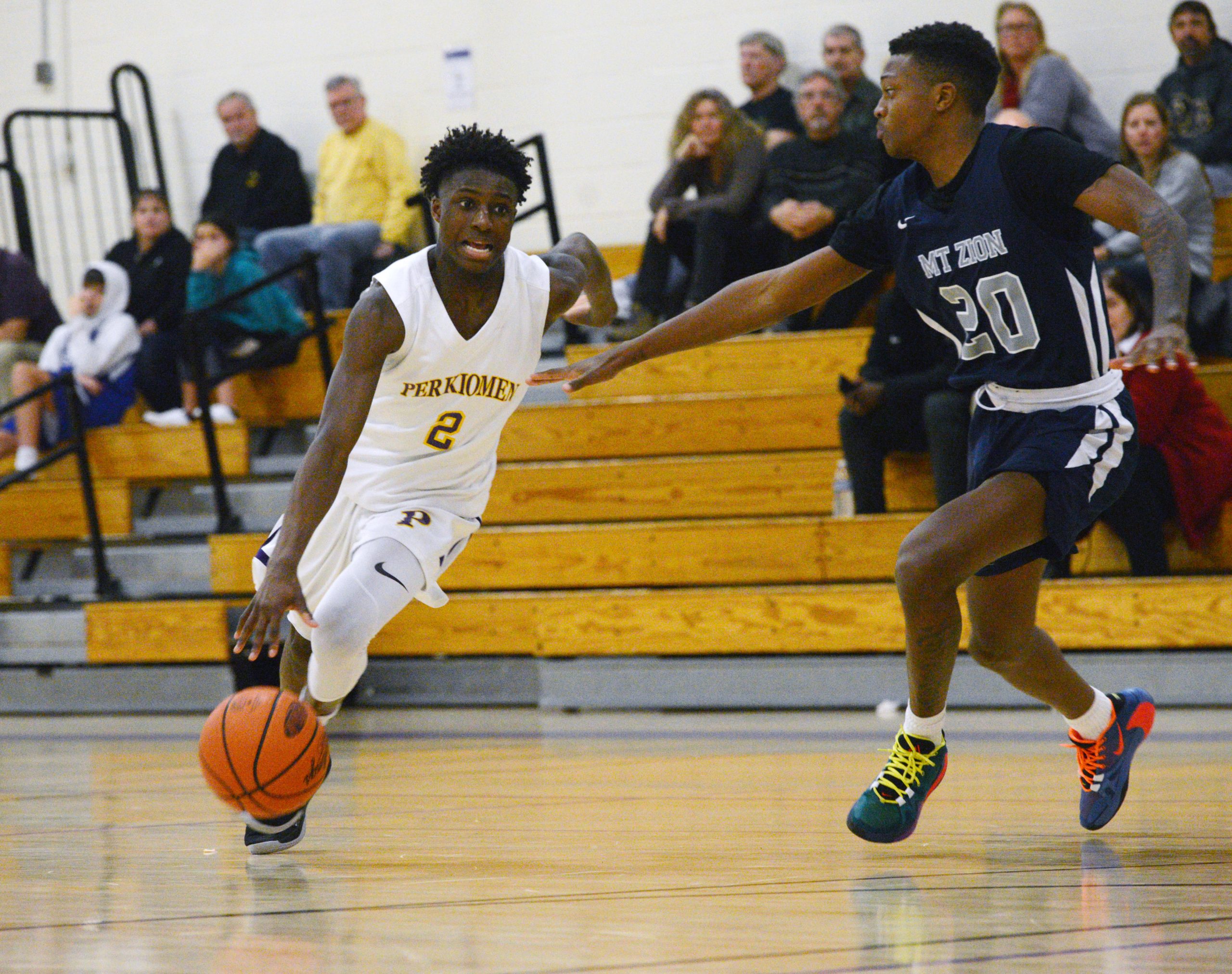 A handful of college coaches and scouts, to go along with a contingent of hoops fans and Perkiomen School students took in the exhibition.

Perkiomen School fell to Mt. Zion Prep, 60-57, in the finale of the three-game showcase event for the newly-formed Great Atlantic Conference – one of five the league is putting on this season.

The event was just what Perkiomen head coach Thomas Baudinet envisioned when his team joined the new prep basketball league prior to the season.

“I think it’s been really good for the kids for their exposure,” Baudinet said. “We’ve had a lot of coaches at the events. The first couple weeks in particular, there were a lot of coaches as everybody had a chance to see the teams for the first time. I think it’s been great. You get to see three high-level games and six good teams at the same site.”

The Great Atlantic Conference is a six-team league, featuring some of the top prep basketball programs on the East Coast. Scotland Campus (Pa.), the No. 5 prep school in the country, defeated Olympus Prep (N.J.) in the first game Wednesday, and the Patrick School (N.J.) defeated West Nottingham Academy (Pa.) in the second before Perkiomen School’s loss to No. 12 Mt. Zion Prep (Md.) in the final game of the day.

Perkiomen School’s other varsity sports participate in the Tri-County League, which the boys basketball program was also part of for many years.

Baudinet arrived at the school in 2016 and raised the level of the program, recently producing Division I players like Nick Guadarrama (New Hampsire), Keeshawn Kellman (Princeton) and Chris Arcidiacono (Villanova). The Panthers left the Tri-County League one season after his arrival to become an independent during the last two years, filling out their schedule with other area prep programs and tournament events.

49-38 with 10 minutes to go. … Woody Newton with a steal and another slam here. pic.twitter.com/CsJrpByOOL

Last season, Perkiomen played four of the schools that belong to the Great Atlantic Conference, including Olympus Prep. Prior to the season, Baudinet was approached by Olympus Prep director Rich Marcucci about joining the league, which was formed in 2017, and thought it would be a positive experience for his players and the school.

This is the first season the six members of the league played each other in the showcase-style tripleheaders. The schools have taken turns hosting the three-game events, which are a draw for talent evaluators and college coaches due to the talent pool in the gym throughout the day.

“It’s great. Every game in the league, there’s a bunch of college coaches on the floor,” Odunowo said. “Every game you get a chance to show your skills to coaches and just get recruited.”

The matchup against a loaded Mt. Zion Prep roster was also a good chance for the Panthers to test themselves against a nationally ranked team. Mt. Zion Prep’s David N’Guessan (6-9), who led the Warriors with 13 points, is being recruited by Saint Joseph’s among a handful of other schools, and Woody Newton (6-8) is committed to play at Syracuse next season.

Perkiomen forward Josh Odunowo, who tied with Phillip Byriel for team-high 12 points, battled with the talented big men inside throughout the game, getting the better of both on multiple occasions, including two second-half dunks.

“It’s good getting to hone your skills because those are the type of guys you are going to be playing against at the next level,” Odunowo said.

Phil Byriel another 3. Perk down 53-49 with four and a half to play. pic.twitter.com/8bSnOXsMTA

The Panthers trailed 53-42 with 7:13 left in the game before two threes from Byriel and a free throw from Odunowo cut the lead to one-possession, 53-50, with under four minutes remaining. After Mt. Zion Prep extended its advantage to seven with two and a half minutes remaining, an Odunowo slam and a three from Gil Otoo pulled Perkiomen within three, 60-57, with 38.5 seconds left,

Mt. Zion Prep missed the front end of a one-and-one to give the Panthers the ball back, but the Warriors forced the ball out of the hands of Perkiomen point guard Steve Payne and Odunowo’s look from three was no good to tie the game.

Along with N’Guessan’s 13 points, Newton and Kendall Bynum had eight for Mt. Zion Prep, which held Perkiomen to just 20 points in the first half to build a 32-20 halftime lead. Byriel and Odunowo tallied 12 apiece for the Panthers followed by seven from Honor Huff and six apiece from Andrew Patnode and William Johnston.

“I don’t think we got into any type of rhythm until the last 10 minutes of the game there, when I thought we actually started looking like ourselves offensively,” Baudinet said. “Once we were able to get a little more dribble penetration, I thought it allowed us to get them to back off a little bit with the pressure.

“But because we were unable to puncture the defense for so long, they were just pounding us and unfortunately we just got in our rhythm a little too late.”

The Panthers have six more games before the last Great Atlantic Conference showcase event at West Nottingham on Feb. 19 when they will play Patrick School. The league’s season will conclude with a two-day tournament Feb. 26 and 27.

Perkiomen will continue to compete against other area prep programs and in the Pennsylvania Independent Schools Athletic Association tournament, which will take place Feb. 14-22. The Great Atlantic Conference is just another way to showcase their talents and face some stiff competition.

“I think the league is looking into adding more quality teams and seeing if we can get this to be a little more established,” Baudinet said. “It’s still in the early years, so hopefully we can keep moving it forward.”