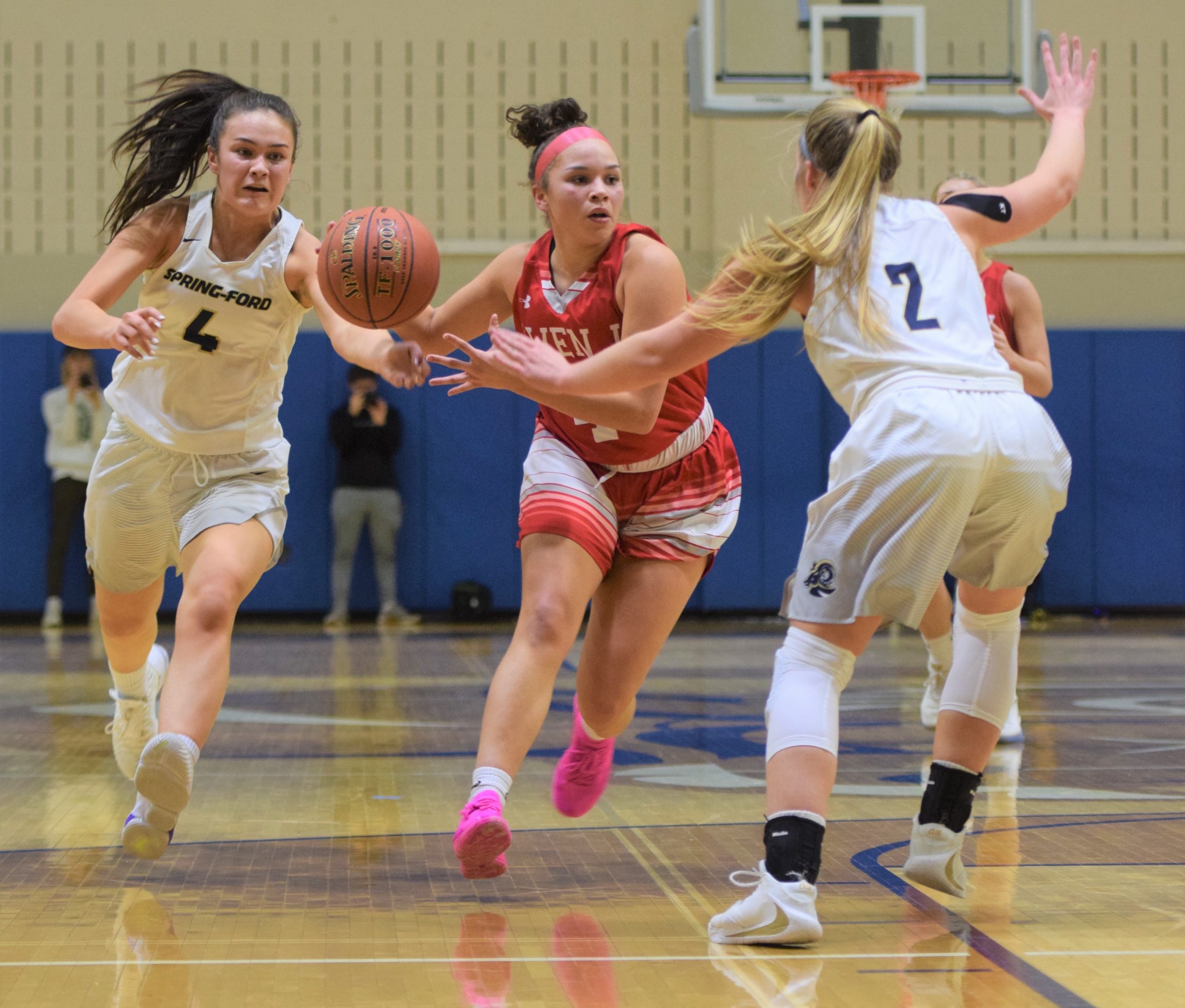 That’s the kind of clout you build as the two-time reigning conference champions and not losing to a PAC opponent in almost two years.

So it was fair if the feeling was unfamiliar after losing to Methacton in overtime last Thursday.

“It was sad, because we didn’t expect it. But at the same time it was good for us,” said Spring-Ford guard Abbey Boyer. “It shows us that we have competition, shows us that we need to pick up our game and to get better throughout the season, no matter what.”

Forget about resting on their laurels: Tuesday night’s opponent, Owen J. Roberts, came to Royersford with visions of leaving town with a win and a part of first place in the Liberty Division.

A tight game throughout, Spring-Ford rallied from OJR’s third-quarter push and cleaned up its defense in the fourth quarter to earn a 54-48 victory on its home floor.

Junior guard Lucy Olsen scored a game-high 23 points and starred in the first three quarters. But with four fouls from the 1:03 mark of the third quarter, it was a game decided by the Rams’ supporting cast.

Senior forward Alyssa Yuan scored six of her 14 points in the final frame and brought the fight defensively inside. Boyer added 10, including a pair of 3-pointers as she’s emerged as the Rams’ new outside shooting standout in place of graduate Cassie Marte.

“Her aggressiveness is always there,” Boyer said of Yuan. “She definitely stood up for us and took charge.”

Owen J. was already in the bonus by the third quarter, which looked as if it could be a big factor. But the Rams didn’t commit another foul the rest of the game and they proved to be the ones winning the game at the free-throw line. Spring-Ford only had one field goal in the fourth but was 10-for-13 at the line.

“We just had to be smarter, realize what the score was, what the time was, and make smarter decisions,” said junior Mac Maloney (3 points) who played a key role on the defensive end.

“Spring-Ford’s a really good team and they always end up finishing when the game is on the line,” Clay said. “We had chances to get rebounds that we missed. We have to put a full game together to beat a team like that.”

After dropping the first regular season meeting, 44-41, it will be another bitter pill to swallow for OJR after leading by five in the third quarter and closing within a point twice in the final two minutes.

“We know that we have to move on, even if it’s not the result we wanted,” Clay said. “That’s something we’ve built over our four years, me, Liv and our other senior, Brooke, we’ve tried to build that mentality of focusing on the next one and knowing we’ll be good.”

Clay always brings the grit for the Wildcats and is the player most likely to hit the deck chasing a loose ball, but she also brought the scoring with eight fourth-quarter points Tuesday.

“If a ball is going out of bounds I’m going to do everything I can to keep it in play,” Clay said of her style.

She played last season with a torn meniscus and sprained ACL and continues to wear a brace on her knee for prevention after offseason surgery.

“I’m just used to it. I wish I could take it off sometimes but I’d get yelled at,” Clay said.

Spring-Ford led the whole first half save for once at 24-23, but Olsen’s late free throws gave the Rams a 25-24 halftime lead.

The Wildcats made a 7-0 run midway through the third quarter to take its biggest lead, 33-30 on a Clay 3-pointer.

But Olsen put her imprint all over an 11-2 run with seven points and assists on two Yuan layups that regained a 41-35 lead for Spring-Ford. A Clay runner got OJR within 46-45 in the final minute, but in the process of attempting to foul Olsen on the ensuing possession, the guard found Yuan open under the hoop for a basket and the foul for a four-point lead that effectively ended it.

“I don’t think we played our best, but I’m just glad we were able to come out with a win,” Maloney said. ‘We were ready. We were angry (after losing to Methacton) and wanted to get back out there.”