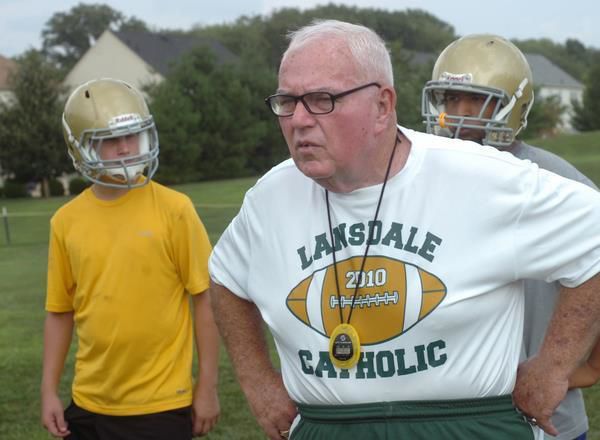 Lansdale Catholic’s legendary football coach Jim Algeo, who was known for the mantra of “Faith, Family, Football” as much as his many wins, died Monday. He was 83.

“Prayers for the Algeo Family with the passing of longtime coach, teacher and counselor Jim Algeo who passed away earlier today,” the school’s statement said. “While Coach (may) be gone his legacy will remain forever with LC and all of those who’s lives he impacted.”

Algeo, who was also a long-time teacher at Lansdale Catholic, coached the Crusaders for 44 years before retiring in 2011. His finished his career with a 293-182-15 record — winning the PIAA Class 2A title in 2004 — and was inducted into the National High School Athletic Coaches Association Hall of Fame.

Algeo’s wife Mickey passed away in November. They were married for 60 years. The couple had nine children and 21 grandchildren. Daughter Maggie deMarteleire was the head coach of both the LC and North Penn girls basketball teams while his Dan Algeo was head coach of the Roman Catholic, Phoenixville and Cardinal O’Hara football teams before dying of a heart attack in 2014.

Daughter Bridget Algeo’s book, “Football Family: The Story of Jim Algeo and the Rare Breed of Lansdale” was recently released.

It was just this month that the “Rare Breed” ethos earned a larger audience as Algeo’s former LC quarterback Joe Judge was named to head coach of the NFL’s New York Giants. Judge, who graduated Lansdale Catholic in 2000, thanked Algeo during his opening press conference with the team.

Algeo, a native of Sharon Hill in Delaware County, began his coaching career in 1958 as an assistant at Cardinal Dougherty. After stops at Sun Valley and Penncrest, Algeo became head coach at Lansdale Catholic, where he stayed on the sidelines until his final game in October 2011.

‘It’s kind of funny — when I started at LC I was 32 years old,’ said Algeo to The Reporter in October 2011. ‘It was my first head coaching job. We had 540 students at the school, 520 the second season, and I thought ‘holy smokes.’ After coaching and teaching there for a while, you come to appreciate the place. I have a lot of great memories.”

The Crusaders claimed an undefeated season in 1972 and in 2004, Algeo led the program to its first PIAA championship. Algeo had quintuple bypass surgery in February ’04 but by the fall had LC finishing with a 14-1 record, capping the year in Hershey with a 40-17 victory over Grove City in the Class 2A state final.