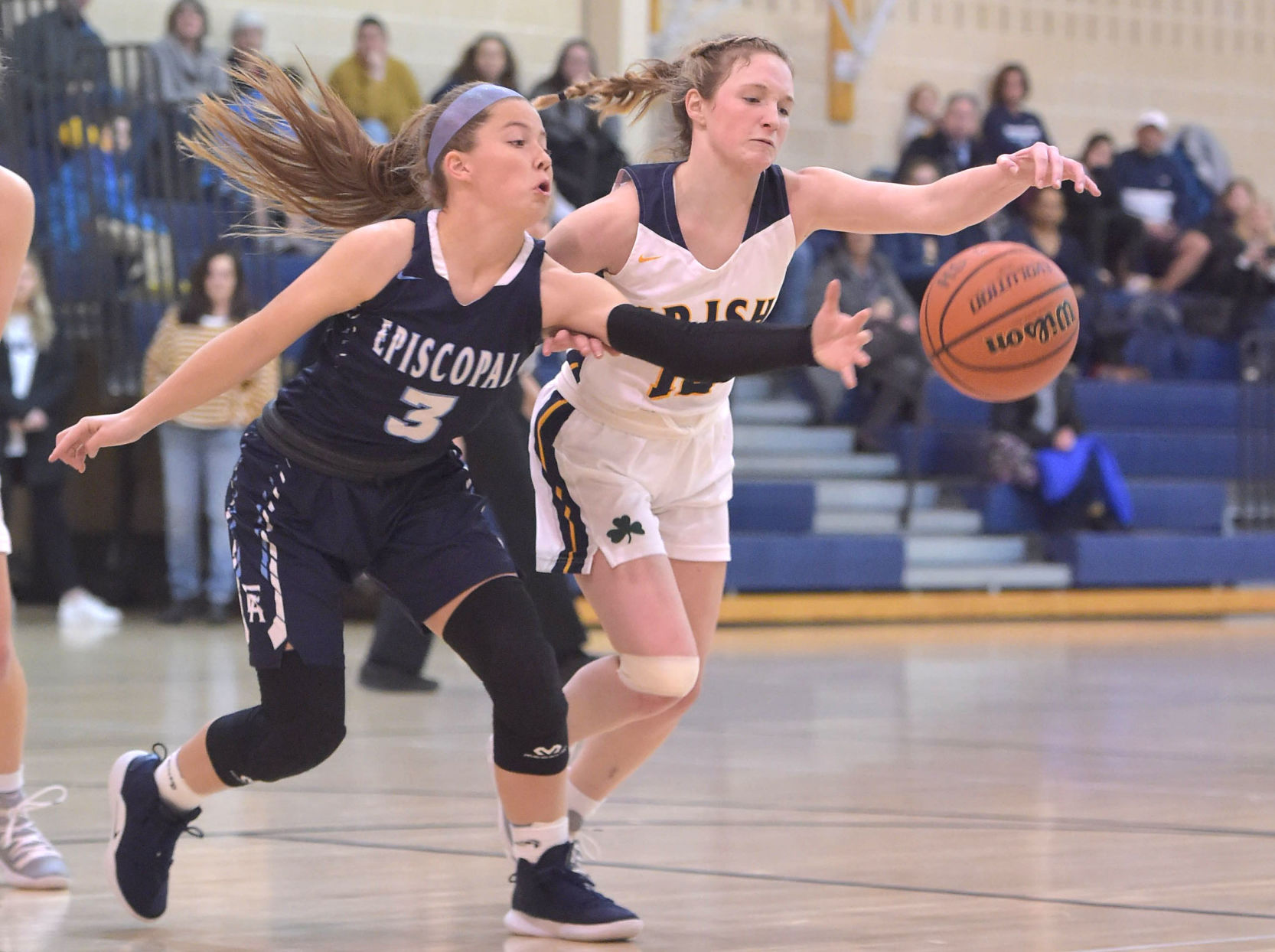 Episcopal Academy's Bella Piselli, left, and Notre Dame's Julia Dever duel for a loose ball in the first quarter Friday in a game between the teams. Dever and the Irish cruised to a 50-30 win. (PETE BANNANMEDIANEWS GROUP))

RADNOR — Izzy Casale and Katie Halligan have been the unsung heroes on the Academy of Notre Dame basketball team.

Casale, affectionately nicknamed “Mighty Mouse” by Irish coach Lauren Thomer, is a junior guard who contributes in multiple ways. She is a scrappy player who will disregard her lack of size to fight for rebounds against the taller kids, all while playing lockdown defense and helping out on the offensive end from time to time.

Halligan is only a freshman, but she is developing into a go-to scoring option for the Irish. A 5-10 power forward, Halligan has been a rebounding machine who can register a double-double with her eyes closed.

Together, Casale and Halligan have been tremendous complementary players to leading scorers Maeve McErlane, a sophomore guard, and Allie Lynch, a senior guard and captain.

In the Irish’s 50-30 Inter-Ac League victory over Episcopal Academy Friday, Casale and Halligan made a big impact. Casale had a stellar floor game with four points, three rebounds, three steals and two assists, while Halligan took control of the low post and compiled 12 points, 11 rebounds, one steal and a blocked shot.

“I just try to get a lot of tips and steals and it creates everything else for everyone,” Casale said. “I try to do whatever I can.”

“I think it’s really great for me to go up against older competition,” she said. “It gets me better and prepares me for more important games, too.”

Notre Dame’s Maeve MacLane goes to the basket in the second half as Episcopal Academy’s Cara Harty gives chase.

Thomer loves what she has seen from both players this season. Casale and Halligan have helped the Irish post a 12-4 overall record. They bounced back Friday from their ugliest loss of the season, a 60-30 setback to Penn Charter on Tuesday.

Halligan tallied nine of her 12 points in the second half. She was able to extend possessions with her strong effort on the glass.

“With Izzy, we call her out little Mighty Mouse out there because she just makes plays. She’s fun to watch, fun to coach, and she just makes things happen.

Casale’s performance has earned the trust of Thomer and the rest of the team. Before the season, Thomer was uncertain how Casale would fit into the team. But she has proven to be one of the most improved players on the squad.

“We came into the season not totally sure of what role she was going to have,” Thomer said of Casale. “She became somebody that we can barely take off the floor anymore because of how much she produces. She gets steals, she gets tips, and she finds a way to get a rebound even though she’s 5-1.

“You know, it’s really fun to have a player like that because she gets energized about our defenses and that gets everybody else jazzed up. Izzy is a sparkplug. Initially, before the season started, we thought she was somebody who was going to come off the bench for us. Now she is playing 30 minutes a game and we can’t even take her out. She means that much. Sometimes she is mismatched with her size, but she makes up for it with her speed and athleticism.”

After suffering a lopsided loss to Penn Charter, Thomer said the players called a team meeting led by Lynch and fellow senior Riley Gillin, who has missed the entire season due to injury.

“I have to give credit to our girls because, for the most part, whenever we have hit adversity they have found a way to come together and bounce back and have a really good practice the next day,” Thomer said. “They have accountability and there is a really good passion. The strength is our senior leadership. They had a big team meeting after our devastating loss to Penn Charter, and no coaches were involved. They really sent a message that it starts in practice, that we have to do better.”

Notre Dame’s Allie Lynch, left, one-hands a shot past Episcopal’s Caroline McCreary in the second half Friday. The Irish would push to a 50-30 victory. (PETE BANNAN/MEDIANEWS GROUP)

The Irish were plenty better Friday. Aided by a stifling full-court press, the Irish forced a bevy of EA turnovers in the first quarter and raced out to a 14-4 advantage. Episcopal cleaned up its errors in the second quarter and cut the deficit to seven points at halftime. The Churchwomen went on a 7-2 mini-run to begin the third quarter, slicing the Irish’s lead to five points after Riley Cassidy drilled a 3-pointer. Notre Dame responded following a timeout and outscored the visiting Churchwomen 19-6 the rest of the way.

McErlane, a sensational sophomore guard, had 12 of her game-high 17 points after intermission. She also led all players with three assists and five steals. Lynch finished with nine points.