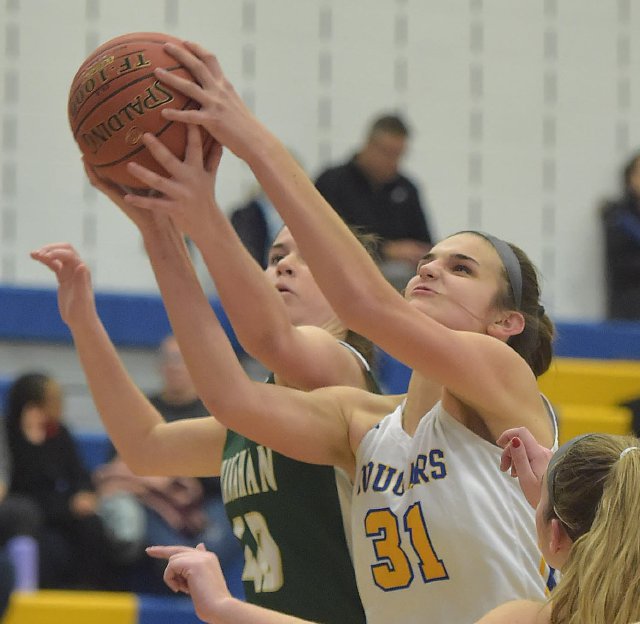 UWCHLAN – The refrain came from the Downingtown East bench, over and over as if it was on a loop.

It was the voice of Cougars’ head coach Tom Schurtz, and his basketball squad was obviously listening. In a tight battle throughout the first half, the Downingtown East girls turned up the screws on the defensive end of the floor and proceeded to pull away to a convincing 54-38 win over visiting West Chester East on Thursday.

“We knew we had to come at (West Chester East) hard because if we didn’t then they would have a mindset that they could beat us,” said Cougars’ sophomore guard Lauren Kent.

Downingtown East improves to 7-0 in the Ches-Mont National (10-4 overall) by sweeping the regular season series against the up-and-coming Vikings (4-3, 10-4). And unlike the first meeting (a competitive 66-57 decision), the second half of the rematch was lopsided.

“We are excited about the way we are playing,” said Schurtz, who notched the 300th win of his coaching career. “We are unselfish, we do a lot on the defensive end, and we just try to trust in what we are doing. In that third quarter, that’s about as close as we’ve come all season to the style of play we’ve been trying to find.”

The Cougars had a 25-10 scoring advantage in the second half, but the game turned completely in the third quarter as Downingtown East came very close to shutting out West Chester East. The Vikings’ only points came on a late steal and lay-in.

“We had the mindset that we couldn’t let up. We are a third quarter team and we just kept pushing,” Kent explained.

“It was a great defensive effort throughout,” Schurtz added. “What goes unnoticed was how many (West Chester East) trips ended with one shot. We talk a lot about ‘one trip, one stop,’ and that was what we did in that third quarter.

“We’ve had a couple quarters where we’ve shut down a team, but never a team of (West Chester East’s) quality.”

In all, it was an 11-2 quarter that turned a one-point battle into a comfortable 40-30 lead. The Vikings never threatened again.

“I thought we had the momentum, so going into halftime was the worst thing that could happen to us,” said West Chester East head coach Erin Listrani.

“(Downingtown East) got a few quick baskets, we got a few fouls, and momentum turned to them.”

The start, however, was very different. With star center Bella Smuda leading the way, the Cougars staged an early 9-2 rally to take the lead for good. But the Vikings stayed within striking distance with perimeter shooting.

West Chester East knocked down six first half 3-pointers, including a back-to-back pair from junior guard Alex Douglass in the second period, to slice Downingtown East’s edge to 29-28 at the break.

“(West Chester East) made a lot of shots in the first half,” Schurtz said. “But in the second I thought our girls did a great job defensively, rotating, scrambling to the ball and forcing tough shots.”

Smuda didn’t have one of her classic outings, and yet the 6-foot-5 senior notched a triple double (16 points, 10 rebounds, 11 blocks). And she got plenty of scoring support from Kent (16 points) and junior Caroline Brennan (10 points).

“Caroline is one of the best defensive players I’ve coached,” Schurtz said.

“Our offense stalled, but that’s a credit to (Downingtown East’s) defense,” Listrani added. “They are a talented team because they can play at both ends of the floor.

“With them you have to pick your poison. Smuda is a very nice player, but D-East is more than just her. We respect their other players.”

West Chester East entered the day having won eight of the previous nine.

“I’m proud of the way my team fought,” Listrani said. “They play hard for each other, and for me, night-in and night-out.”