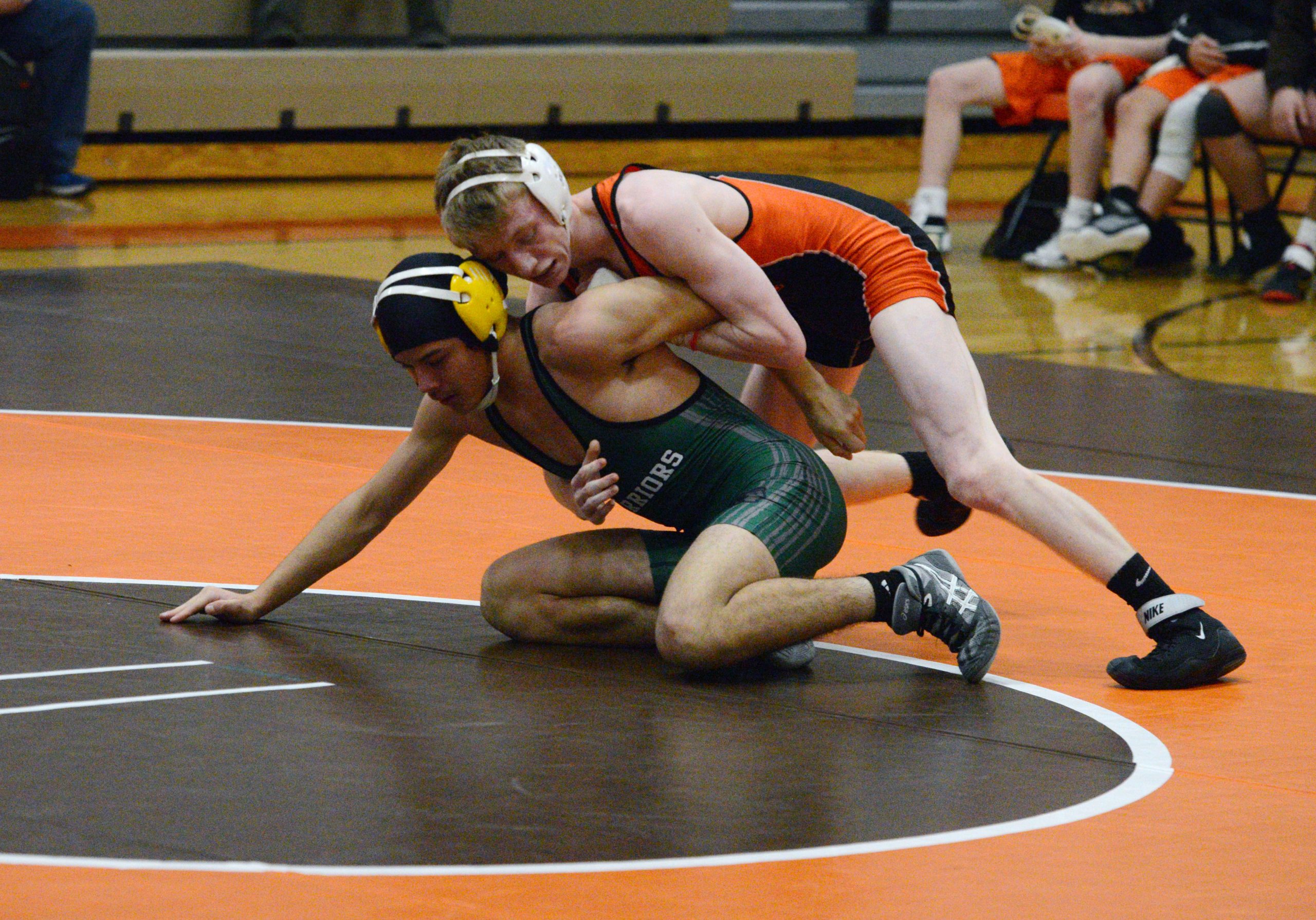 GRATERFORD >> Two distinct cultures were on display in the Perkiomen Valley gym Wednesday.

At the far end was the host Vikings, with a senior-laden lineup motoring to another fast start in a string spanning a number of years. At the other end was Methacton, a younger outfit trying to get established in the first season of Tony Haley’s second head-coaching tenure.

Experience won out in a big way. PV rang up a 51-12 victory on its neighboring Pioneer Athletic Conference rivals, going to 2-1 in the Liberty Division and 7-4 six weeks into a season that could serve as a harmonious swan song for the Class of 2020.

“We work hard on the mat,” P.J. Kakos, one of the Vikes’ more notable seniors, said, “and we’re buying in to the program. We had a bit of a rough start, but now we’re rolling on all cylinders.”

From a 2-2 December — the high point a fourth-place team finish in the 35-team Ralph Wetzel Classic over the holiday break — Perk Valley is in the midst of a productive January. It’s coming off a fourth-place outing at last weekend’s PAC Championships, with nine grapplers making the final round and four claiming medals.

Against Methacton, it bolted to a 27-point start fueled in large part by two pins and three major decisions. After the Warriors stemmed that surge with a three-bout swing between 152 and 170, the Vikes rang up four falls — Jacob Sturm provided the match clincher with his drop at 182 — before the affair closed out with a double forfeit at 106.

“We’re fortunate to have eight seniors on varsity,” PV head coach Jared Dubbs added. “They know what to expect and we have some freshmen who’ve stepped up.”

The night’s best outcome for Methacton (0-3 PAC Liberty, 2-9 overall) was its three-weight winning run initiated by Kibwe McNair’s third-period technical fall at 152. Brody Borkowski then held off Grant Euker for a 2-1 decision at 160, and Roman Moser worked for a 12-3 major decision at 170.

Beyond that, Haley found little else satisfying about the team’s performance that night, or during the season.

“We have inexperienced, young wrestlers,” he said, noting only three of the team’s wrestlers work in the sport outside the high-school season. “The young, inexperienced guys have to put in the time. We’re trying to change the culture … it’s a culture I’m not accustomed to.”

PV’s closing pin parade included Jakob Sterling employing a Peterson hold to get the slap at 2:12 at 195, Eli Johnston getting a fall with 13 seconds left at 220 and Vinny Corropolese finishing 285 in 1:08.

“We’re not just hoping to get wins,” Dubbs said. “We want to progress to the post-season, concentrating on the fundamentals.”

Working toward bonus points is another aspect of the Vikings. The Kakos brothers showed that in their bouts, getting takedowns before time expired to upgrade their decisions to “majors.”

“That’s the team mentality,” Dubbs added. “If there’s 30 seconds left and we’re up by seven … we can’t control any other match, so the kids work to control their matches.”

NOTES >> PV’s match with Pottsgrove, scheduled for 11 a.m. Saturday, was being considered for a change to Friday evening with forecasts for significant snow accumulation being predicted for Saturday. A decision on a change will be announced Thursday. … In nine of the contested weights, The Vikings scored the first takedown. In six of them, the wrestlers tacked on back points in quick succession.