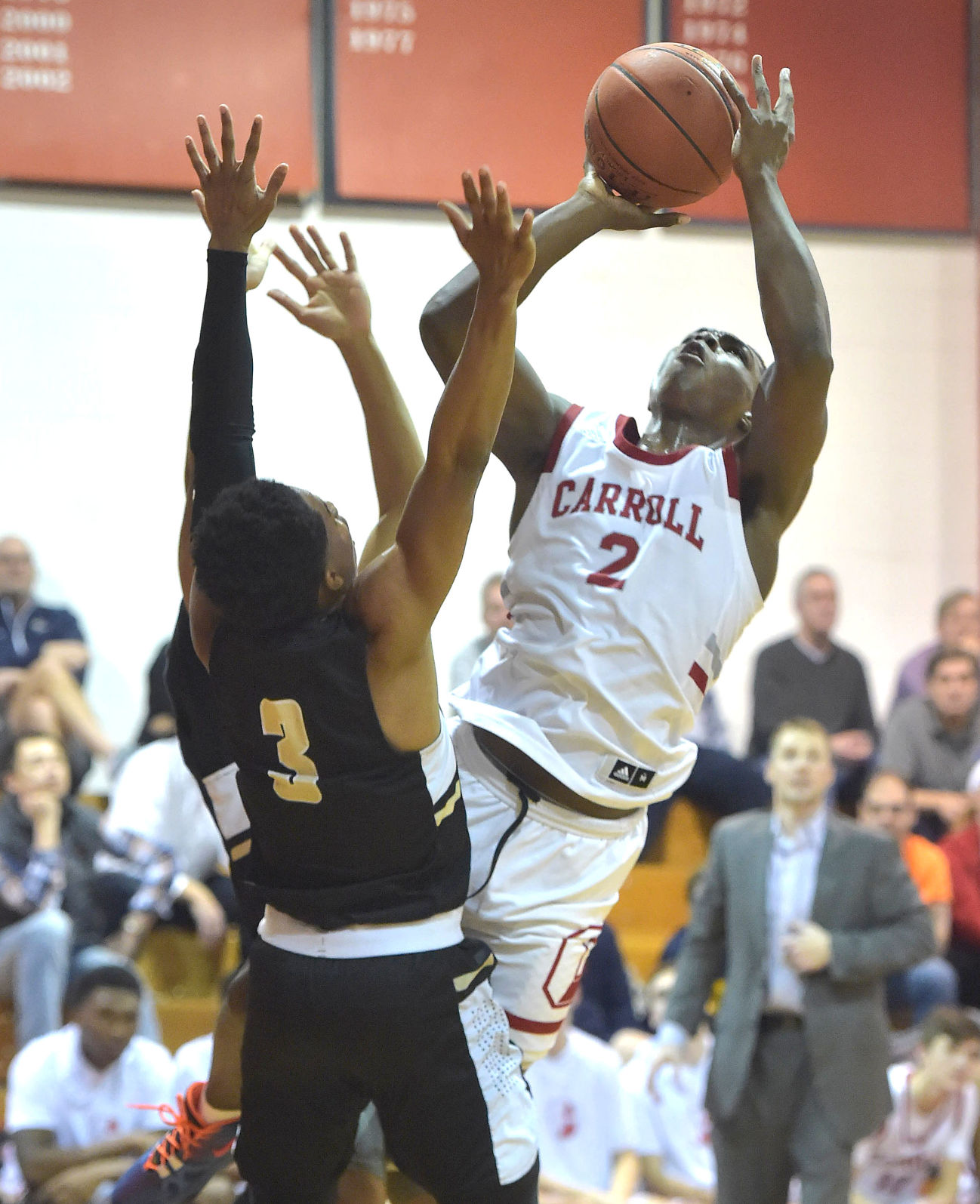 RADNOR — With the Archbishop Carroll crowd into the game and Neumann-Goretti trailing by one point entering the fourth quarter Monday night, the Saints knew something needed to change.

They had weathered a Carroll charge in the third quarter, trailing by as many as four. But the game was being played at the controlled pace that favored the hosts, and the reliance on half-court offense was throwing off the Saints’ balance between aggression off the bounce and settling for jump shots.

In the final frame, though, the Saints did what they just seem to do every time their backs are against the wall: They adjusted, then they prevailed.

A pair of 3-pointers by Cameron Young put the Saints up for good, and the daring drives of Hysier Miller helped seal a 65-62 Catholic League decision over Carroll.

Neumann-Goretti fell behind in the third by being overly reliant on jumpers, going 2-for-8 in the frame (part of an 8-for-27 day beyond the arc). But in the fourth, it attempted just three long-range looks.

“The 3s we took were good looks, but we had to get better looks as a team,” said Miller, who scored eight of his 16 points in the fourth. “So if we could drive and then kick it out, we’re going to keep shooting. When we drove, sometimes the layup was there and we didn’t have to kick it out. So that’s how it turned into layups when they continued to stay with our shooters. We’re going to continue to play the way we play, and we drive first to get open shots.”

Young, who scored 14 points, provided back-breakers on consecutive possessions. With the score tied at 47, Jordan Hall drove from the right wing into the lane and whipped a no-look pass to Young to spot up on the left wing. The next time down, it was Miller who drove and kicked out to Young for the swish.

That put Neumann-Goretti up, 53-47, and quieted the Carroll faithful.

“It gives us a whole lot of energy on the road, especially with the way the crowd was going,” guard Hakim Byrd said of Young’s shots. “We were down one going into the fourth quarter, and Cam really showed up big time at the end.”

For a while, it looked like Carroll (10-3, 5-1 PCL) might just pull out an impressive home win via some old-fashioned physical basketball. The Patriots dictated tempo against a Neumann side that had just plastered 115 points on Bonner-Prendergast. A game in the 60s was much more hospitable to the hosts.

Carroll established its post play early and often. In a game where each team started (and, with six-man rotations, played more or less constantly) three players 6-6 or taller, only Tairi Ketner showed a willingness to grind it out in the post.

“It’s fun to have bully ball,” Ketner said. “I’m able to work. I’m able to make my move. Even when they double or come down, I’m able to kick it out to my shooters.”

Ketner in particular formed a strong working bond with impressive freshman point guard Dean Coleman-Newsome, who had eight points and six assists, many on post entries or pick-and-rolls to Ketner.

“He’s ready to learn,” Ketner said. “He wants to learn, he wants to get better, and that’s the good part. He’s a really good player, so in order for us to make our run, we need him.”

Ketner cleans up the mess. Carroll up 1. pic.twitter.com/Qcgeq3LwQX

Ketner’s physicality came at a price, though, and aided by a first-half double technical with Young, he fouled out with four minutes to play and Carroll trailing by seven.

That left the scoring burden on Carroll’s two other bigs, the perimeter-oriented Anquan Hill and John Camden. And neither put their stamp on the game, despite two fourth-quarter 3-pointers apiece. Both shot 5-for-11 from the field, and neither made their way to the free-throw line. Camden, standing 6-7, scored 14 points but didn’t have an assist until the fourth (both on pick-and-pops with Hill) and had just two rebounds, shadowed by Hall most of the night, save for when the Saint Joseph’s commit exited twice to have a bloody lip patched up.

Hill had 13 points and six rebounds, but Young largely got the better of him.

Byrd led all scorers with 26 points. Miller dished four assists to go with 16 points, but it was Hall who commanded the floor. He had just two points and didn’t attempt a field goal in the second half, but he supplied team-highs with eight rebounds, seven assists and three steals, contributing to a damning 17 Carroll turnovers.

“He’s great because he can see over anybody,” Byrd said of Hall. “I like giving him the ball playing the wing and letting him operate. I know he’s going to find us. He’s a really good player.”

Neumann-Goretti was 7-for-9 at the line in the fourth and 13-for-16 for the game. Carroll finished just 7-for-14 at the stripe.

Those are the advantages that an opportunistic team like the Saints always seem to have the edge in, the ones they find and manage to press in the clutch.

Jalen Cassidy notched a double-double with 11 points and 10 boards for AP (9-5), which led 23-4 after the first quarter. Tahriq Marrero added 19 points and Ahmir Simmons tossed in 10.

Will Anozie led all players with 34 points for VMFA.

W.C. East 66, Chester Charter SA 47 >> The Sabers struggled to a 3-for-24 shooting performance in the first half. Timmy Evans had a team-high 12 points and Damir Evans chipped in with eight.

Delco Christian 71, Jenkintown 49 >> Jackson Piotrowski came close to finishing with a double-double for the Knights, who raced out to a 17-6 lead and never looked back. Piotrowski had 14 points, nine boards and a blocked shot.

Other standouts for DC included Obinna Nwobodo, who was 7-for-7 at the foul line and ended with 15 points. Joshua Parks tossed in 13 points.