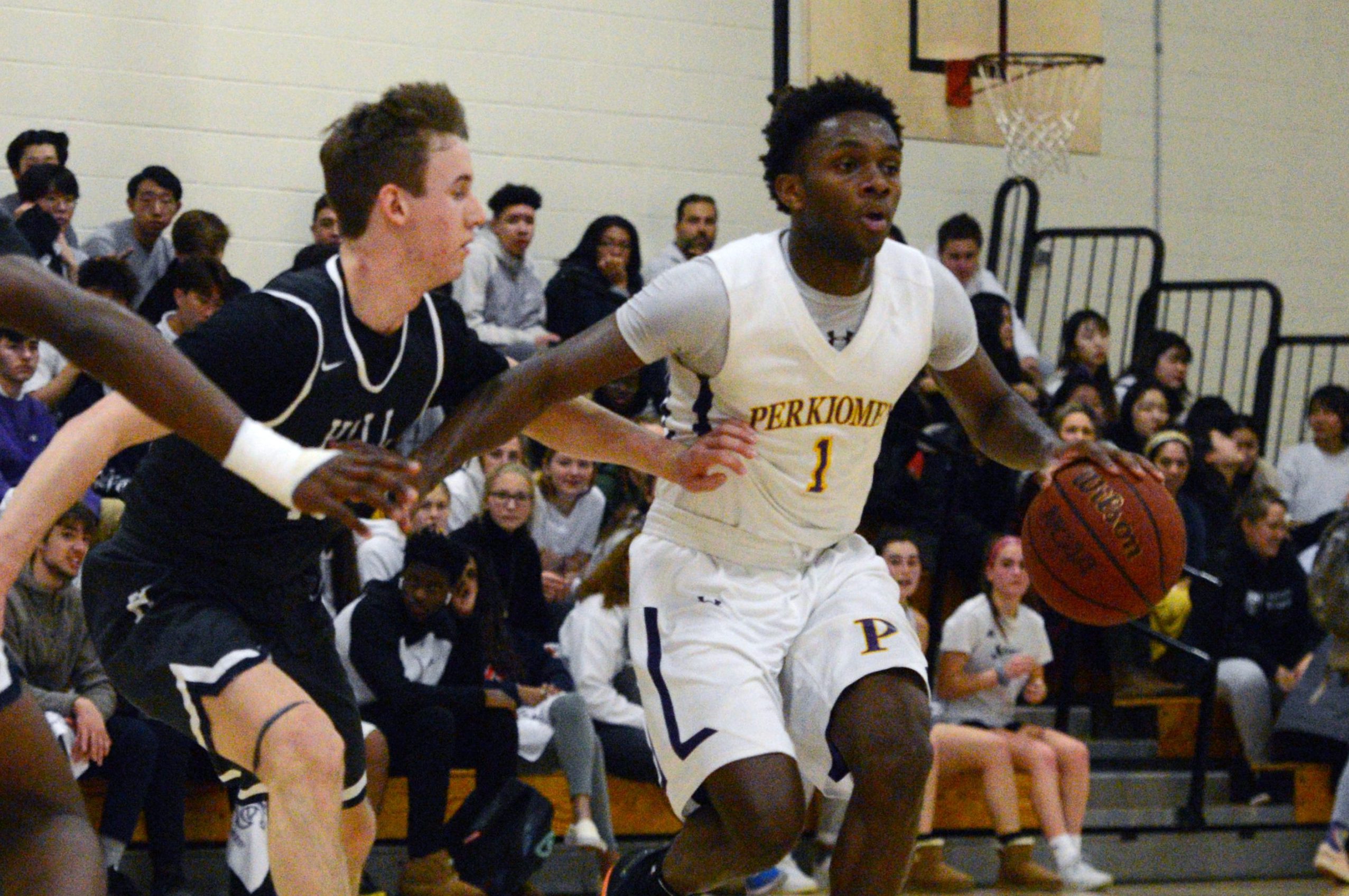 PENNSBURG >> Hill School’s Zach Lezanic and Perkiomen School’s Steve Payne have played at least a half a dozen times over the past four years.

Both multi-year starters at Conestoga and Lower Merion, respectively, the two post-grad point guards had another chance to match up Tuesday night as Lezanic’s Blues faced Payne’s Panthers.

While Payne’s 17 points led all scorers and Perk got 15 more from Gil Otoo, Lezanic had nine points, and Gabe Dorsey and Daniel Nixon had 16 points apiece to give Hill School a 71-63 win in the battle of former Central League stars.

“I’ve been playing against him since like sixth grade,” Lezanic said. “It’s kind of been a little bit of a rivalry between us. It’s a lot of fun. He’s a great player and hopefully I’ll see him at the next level as well.” The matchup of the Central League guards wasn’t the only meeting of familiar foes: Hill School and Perkiomen School have established themselves as two of the area’s top prep programs over the past several seasons and a good game normally ensues when the two annually get together.

That was the case again Tuesday as little separated the two teams in the first half. Payne closed the gap to 31-29 Hill at halftime with a transition bucket late in the second quarter, but that was the closest the Panthers would get to the lead throughout the rest of the contest.

The game changed at the start of the third quarter as Hill buried four 3-point shots — two by Dorsey, one from Lezanic and Nixon — within the first three minutes of the second half to extend its lead to 43-32. The Blues led by at least five the remainder of the game.

“I think in the first half, we were kind of going through the motions and not playing like ourselves,” Lezanic said. “Coach said at halftime, ‘Go out and make plays. Run the offense.’ I think we started getting downhill, making plays for each other and hitting open shots. We just happened to hit them in the third quarter, which gave us a 10, 12-point lead and that kind of made the game for us.”

“I gotta give credit to the Hill School,” Payne said. “The Hill made a lot of tough shots. They were just hot and we couldn’t get stops.” Perkiomen closed the gap to 45-40 with 3:43 left in the third after a three by Phil Byriel and two free throws from Andrew Patnode. Hill responded with an 8-1 run, capped by a Dorsey three to go up 53-41 with two minutes left in the quarter.

Honor Huff, who finished with 10 points for the Panthers, hit a three plus the foul at the end of the quarter to close the gap to 57-49 heading to the fourth. Patnode scored another bucket to pull the Panthers back within six.

Gabe Dorsey pumps and goes back up for a jumper. Hill back up double digits, 53-41, with two minutes left in Q3. pic.twitter.com/ufZbwUtGg1

While some sloppy play by Hill late in the quarter made the final outcome in doubt, the Hill defense stiffened in the fourth, never letting Perkiomen go on an extended run and make it a one-possession game.

“We knew before this game it was going to be defense,” Nixon said. “We didn’t really care about the offensive part. It was just defense and rebounding too. Doing those things really helped us.” Sophomore Gabe Moss had 12 points for Hill, Toni Buchmann had 10 and Caleb Dorsey added eight. William Johnston chipped in with eight for the Panthers, including a thunderous two-handed slam in the fourth.

Moss played a key role in the interior defensively for the Blues against a very large Perkiomen squad, recording three blocks. He made some big buckets in the second half, including a reverse jam late in the third quarter and a putback score off his own miss to give Hill a 67-58 late with less than a minute to play before sealing the win late with a two-handed dunk on the fastbreak.

“Where he was six months ago to where he is now is unbelievable,” Lezanic said. “He’s only getting better. He’s going to make an impact for us every game, defensively and offensively.”

“He was major,” added Nixon. “He just held the ball, and that’s what we needed him to do, secure the rebounds and continue to go up strong.”

Hill is scheduled to host Blair Academy on Saturday as it dives back into Mid-Atlantic Prep League play. Perkiomen School travels to West Nottingham Academy on Wednesday before games against Suffield Academy and Worcester Academy this weekend.

Both squads will have their eyes on a deep run in the Pennsylvania Independent Schools tournament later this season. So before Lezanic heads to Army, where he committed Monday, and Payne makes his college commitment, the two could have one last chance to square off at the prep level.

“It’s crazy,” Payne said. “Lezanic’s a really good player, I enjoy playing with him, and it’s crazy to play against him (again).”