Upper Merion wills way past Norristown in Battle of the Bridge 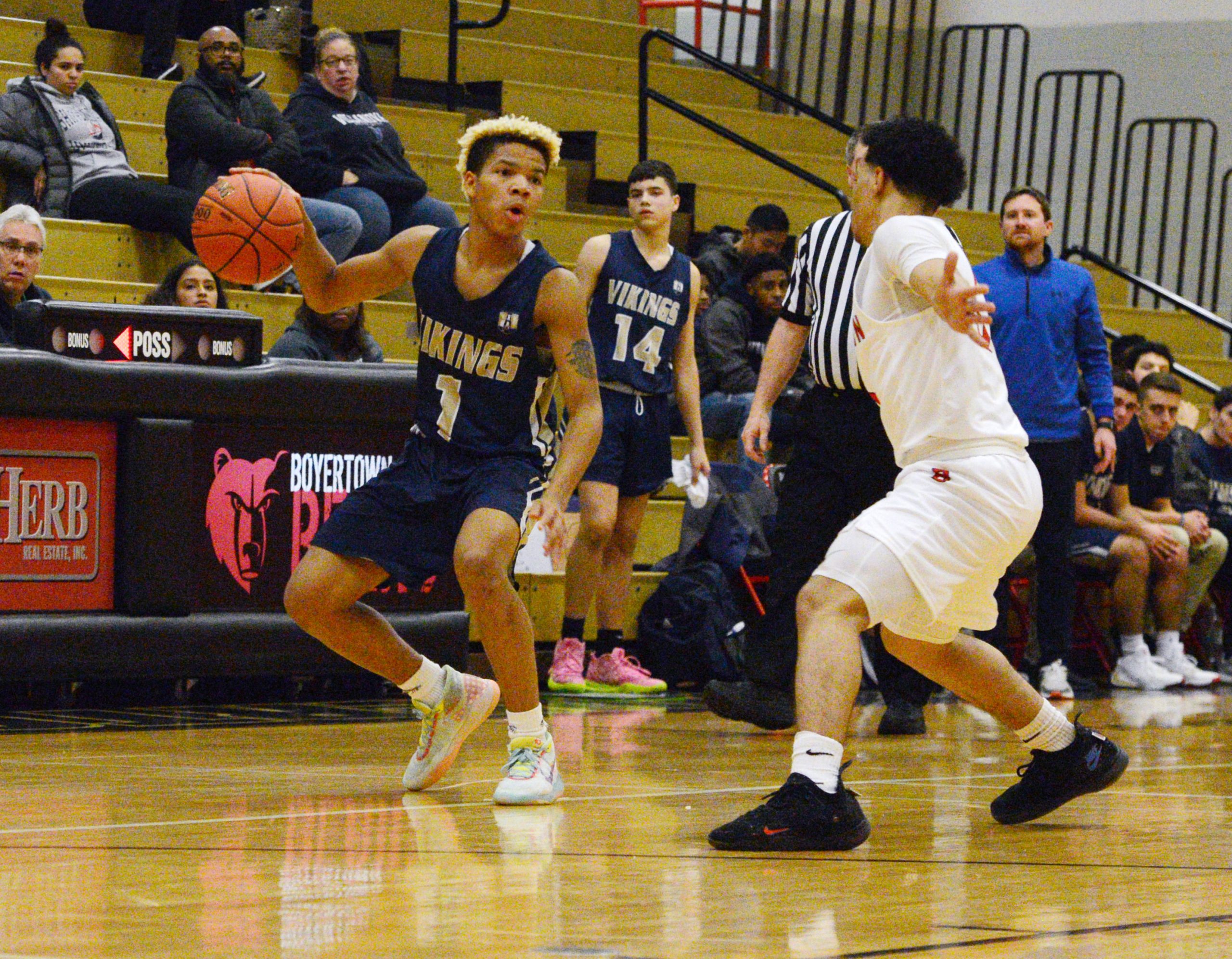 UPPER MERION >> The will to win is a powerful tool when used the correct way.

Wins against rival Norristown haven’t come easy for Upper Merion boys basketball of late and the Vikings entered Saturday night’s Battle of the Bridge having lost their last three home games. Yet, with a packed house behind them, the Vikings’ will proved to be the difference.

Upper Merion put together a superb outing and topped the Eagles 74-64 in a tightly-contested PAC crossover game.

“That was by far the best game we’ve played all season,” UM coach Jason Quenzer said. “The efficiency was there on offense, but they played hard on defense too. Norristown has a lot of firepower and played some good teams, but these guys were just locked in and ready to play this game.”

Prior to Saturday, it wasn’t an issue of want or effort but the Vikings (5-8, 2-4 PAC Frontier) just couldn’t seem to close out games and especially on their home floor. With the gym feeling more like a sauna at times and not a free seat to be had, this was the game for Upper Merion to break that trend.

Vikings senior Nick Shepperd knew something was different about the night just a couple possessions in. Dominic Breece canned a three from the corner to put UM on the board and after a defensive stop, Shepperd drew contact on a make for the traditional three-point play.

“We’ve lost a lot of close games, in the second half especially and letting leads get away from us so being able to close one out was really nice,” Shepperd, a senior forward, said. “It showed us we were able to do it. We knew we were able to do it even after we’d failed a couple times but you build off of failing.”

Neither team led by more than six points through three quarters on Saturday night. UM led 12-11 after one, but a knockdown 3-pointer by Norristown’s Nizer Kinney sent the teams to the half tied 30-30 before the hosts clawed to a 46-43 lead going into the final eight minutes.

Importantly, a 7-2 closing run by Upper Merion allowed the Vikings to have that lead, all spurred by a traditional three-point play by Shepperd. All night, the Vikings tried to push the pace and attack the rim, which led to some major momentum-building and-ones.

Norristown coach Dana “Binky” Johnson saw plenty of will on Saturday, both from his players but also the opposition and he didn’t have to point to much else as the deciding factor.

“Their energy, they won 50/50 balls and it seemed like every time there was a loose ball, they came up with the 50/50 battle,” Johnson said. “Both teams played incredibly hard, that’s a cross-town rivalry at its best. They did a great job with their transition, they played a wonderful game and when I say that, it’s in all aspects so hat’s off to Upper Merion.”

UM’s young guards in sophomore Ty Jones and freshman MJ Tatom along with junior Lukas Kim were the drivers of the Vikings’ get it-and-go offensive strategy. Holding a one-point lead early in the second quarter, Jones drew a foul on a driving layup to kick off a 7-0 run that finally gave UM some breathing room with a 55-47 lead.

The other area Quenzer though was crucial was his team’s ability to get to the line. When they weren’t converting and-ones, the Vikings made plenty of other trips to the line and took 35 free throws with their downhill mentality.

“We don’t get very many Norristown wins here and the guys get up for the game,” Quenzer said. “When we talk about defensive intensity, you can say it as much as you want but this was the first game where they actually showed it and they were just locked in and willing to do whatever they needed to do.”

Shepperd scored a game-high 25 points in what his coach dubbed a “monster game” to go with eight rebounds. The senior hit a 3-pointer off a Kim feed with 4:44 left in the game that ignited the Upper Merion faithful and put the Vikings up 58-49.

Unfortunately for the Vikings, Shepperd’s reaction was a little too much and he was hit with a technical foul, allowing Norristown (6-6, 3-3 PAC Liberty) two free throws and the ball, which led to another pair of foul shots.

“It felt a little too good,” Shepperd said. “But it is what it is.”

Breece had his teammate’s back however, scoring seven of the next eight Upper Merion points with the last three coming on an and-one earned with a determined drive at the rim. The senior also had a solid game, with 18 points while Jones netted 15 and Tatom scored 11 off the bench.

Norristown’s faced plenty of challenges this season and Saturday was no exception. With a game against Coatesville looming Monday as part of a Play By Play Classic event at West Chester, it’s all meant to build for extending the season through February.

“The season is going to have its highs and lows but I felt we were in more of a median until today, now they’ve felt a low,” Johnson said. “They needed to feel a low. Losing to your crosstown rival digs a little deeper and I want to see how they come out of it.

“Tonight was pure will on both ends at certain points of the game. Upper Merion just said ‘I want it more than you,’ they achieved that and it was a major difference.”

The task at hand for the Vikings now is to find a way to bring Saturday’s effort every game. There won’t be a full bleacher section of students to turn to for a reaction after a big hoop at every road game and not every remaining home game will have the same kind of intensity.

“To say it bluntly, we have to come out every game like we’re playing Norristown,” Shepperd said. “We have to play every game like it’s an old rivalry with someone you don’t like and who doesn’t like you. We should be carrying that same energy we brought into this game into every game this season.”

“Our seniors are going to remember this game forever and they deserve it,” Quenzer said. “We have to enjoy tonight but if we can keep that same mentality, we’re a tough team to beat. The intensity has to be there no matter what and hopefully they can realize that by looking back at this game.”