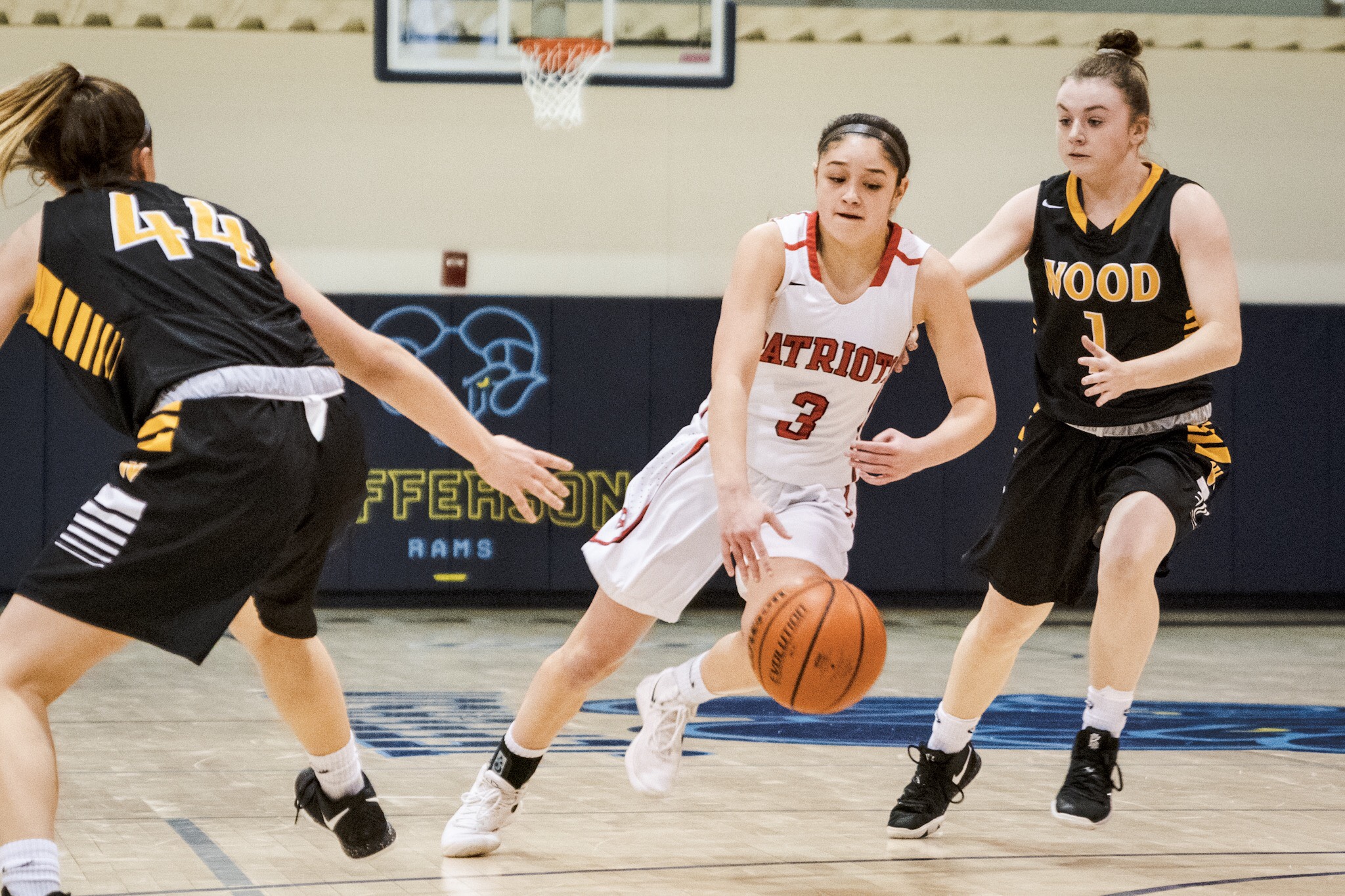 For Germantown Academy’s girls basketball team, it was an oft-repeated phrase in the second half of Sunday’s road game at Archbishop Carroll. If the Patriots of GA wanted to end their week with a win, they were going to have to lock in on defense and slow a Carroll Patriots offense that had cut them apart at times in the first half.

So, GA stayed locked in and picked up a 68-59 win over the defending PCL champions.

“We really emphasized at halftime our defense,” GA senior point guard Maddie Vizza said. “Switching screens, no more threes, they were really hot in the first half so we wanted to switch everything and really start locking down on defense because that’s what would win us the game.”

The first quarter was a track meet of offense, with Carroll’s offense operating at near-max efficiency with players working together to screen off defenders and create wide-open looks off the extra pass. Senior Erin Sweeney came out firing, scoring 11 in the opening frame while adding two of the team’s seven assists as Carroll built a 21-15 lead.

GA (14-3, 3-0 Inter-Ac) got a lift from the return of senior Elle Stauffer to the starting lineup and the forward started quick with six points and a pair of assists.

An 8-0 run to open the second quarter got the visiting Patriots within one of Carroll but a handful of turnovers would stymie that run. With guards Grace O’Neill and Taylor Wilson dropping into the lane to pick off passes, Carroll (8-6, 2-4 PCL Red) got a few stops and rebuilt a five-point lead.

“I feel like we had a consistent energy which really helped us throughout the game,” O’Neill, a sophomore point guard, said. “Unfortunately, we were up and went into a lull offensively especially in the third quarter but we rotated well defensively and the energy is the best thing we can take away.”

Sweeney led all scorers with 23 points but the Drexel recruit also passed well and her assist to Maggie Grant for a 3-pointer gave the homestanding Patriots a 31-28 lead at the break a play after Vizza had knotted the score.

A trey by O’Neill, who notched 16 points, gave Carroll a 34-32 lead with 6:28 to go in the third quarter. The PCL champions wouldn’t score again for more than four minutes. GA, sparked by senior Caitlyn Priore, would rip off a go-ahead 10-0 run to nab a 42-34 lead.

“Our communication was a lot better,” Priore said. “Maddie, you can always hear her talking even if she’s on the bench. We all started boxing out in the second half too, which was an improvement because we were giving them a lot of offensive rebounds.

“You could see in the beginning, they barely missed so giving them a second opportunity when they did was not something we wanted them to have.”

Stauffer gave Germantown Academy a 36-34 lead off a steal and coast-to-coast layup, but she landed and went right to the floor with a leg injury.

“We wanted to stay locked in, even though she went down, we wanted to keep going for her,” Vizza, who along with Sweeney, played with Stauffer on the same Comets AAU team, said. “Hopefully she’s OK, we wanted to get that win for her.”

Priore, who has committed to Gettysburg College, was GA’s X-factor on Sunday. The forward missed all of last season with an ACL injury but has been a starting lineup mainstay this season and did a little bit of everything for the visitors against Carroll.

Four of her seven points came during the 10-0 GA run and Priore added four of her nine rebounds and two of her four assists in the third quarter.

“It’s a lot of work since everyone is a year ahead of me but they also really pushed me to work a lot harder,” Priore said.

“Shout out Caitlyn on the boards,” Vizza said. “Not even kidding, she was huge just rebounding the ball like crazy, getting to the basket. She played a really great game.”

With Priore and Becca Booth taking care of the glass, Jaye Haynes took the job of trying to keep Sweeney in check. Haynes face-guarded the Carroll senior most of the second half, with her teammates taking over anytime a screen tried to free the guard for a shot.

GIRLS BASKETBALL: @gagirlsbball @sarahdilello20 emerges with a steal then dishes to @jhaynes34 for a Q2 score at Archbishop Carroll pic.twitter.com/P1C8xs4SeN

Sweeney went scoreless in the third quarter, although she shook free in the fourth quarter to score 10 points as Carroll tried to make a rally. Her three with 3:28 left got the Patriots within 55-51 but GA was strong at the foul line down the stretch.

The loss doesn’t affect Carroll’s standing in the PCL or beyond, so in some ways, it can actually benefit the Patriots going forward. Between GA’s size hammering in the importance of boxing out on rebounds or matching up with an offense that also does a nice job of getting its players open, there was plenty for Carroll to learn from.

“Maddie Vizza shot in my face a couple times, so especially me, those are things we can learn to adjust to quicker,” O’Neill said. “Keeping up the momentum is something we can always keep improving on. We played Neumann-Goretti over the weekend and our energy was good there so I think we’re going in the right direction.”

Vizza and Priore called it a good week with the three wins and with GA right in the thick of Inter-Ac play, they saw what can come of just staying locked in on the road.

“We just had to keep trusting our stuff,” Vizza said. “We were trying to force some things that weren’t there in the offense but once we got into our stuff, moved the ball and made them work on defense and shift, we got better looks at the basket and in the second half especially.”