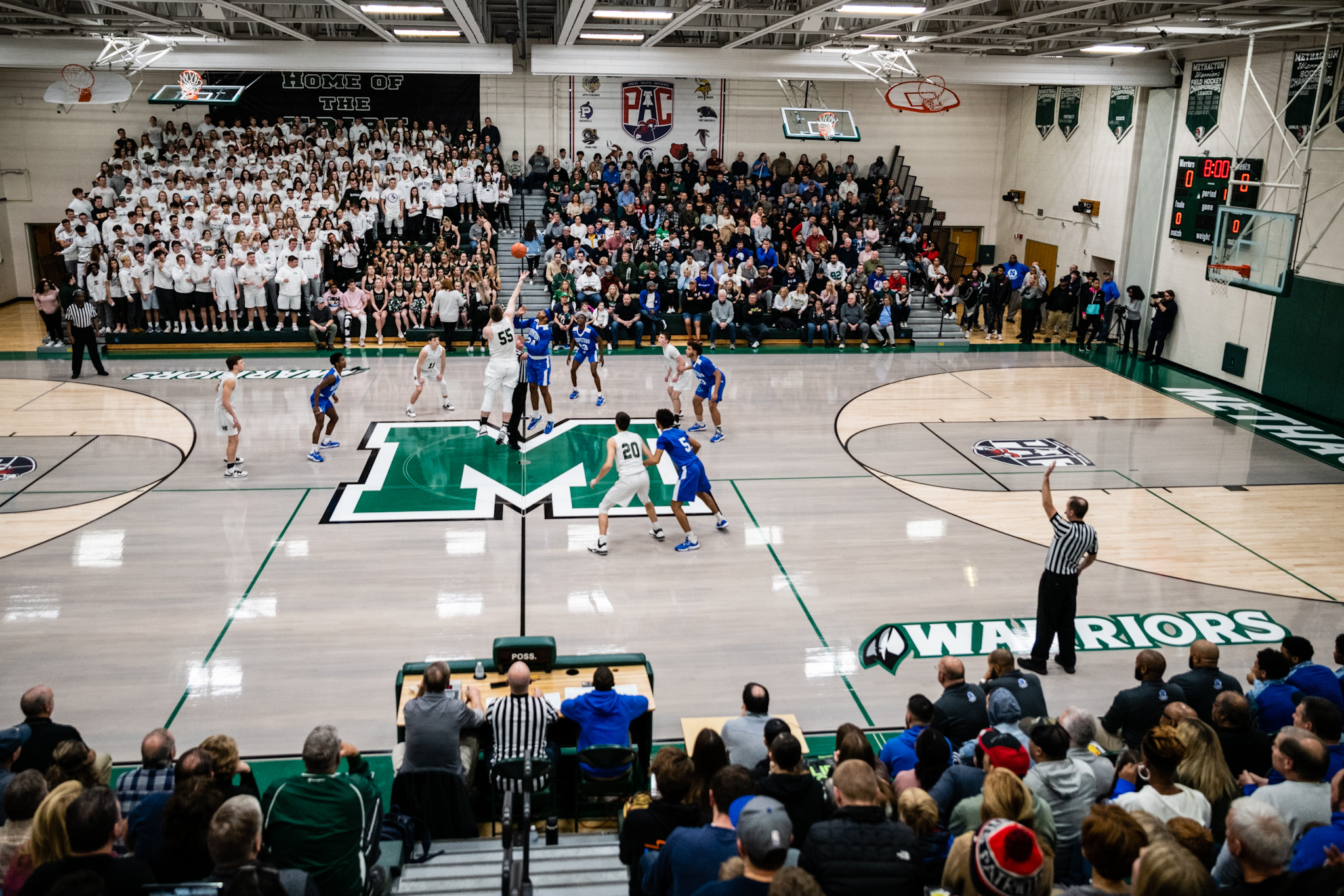 The opening tipoff between Norristown and Methacton as the Warriors’ unveiled their new gym floor during their game Friday, Jan. 3, 2020. (James Beaver/For MediaNews Group)

WORCESTER >> Methacton wasted no time breaking in its new floor.

The Warriors jumped out to a comfortable lead in the first quarter and rode the energy to a wire-to-wire 68-48 Pioneer Athletic Conference Liberty Division win over Norristown Friday night in their home opener at Methacton High School.

The new floor was finished in the Methacton gym a few days prior to the game. The team managed one practice on the new surface before taking the floor in front of a packed house against the rival Eagles.

“We’re thrilled with how (the floor) looks,” Methacton coach Jeff Derstine added. “It was a fun night having a big crowd out and great energy.”

In the first 55 seconds of play on the new court, the Warriors scored seven points and forced a Norristown timeout. Owen Kropp played a big role in the opening stretch, with two points, two assists and a steal.

“We just wanted to go out and put forth our best effort,” Woodward said. “We knew that (Norristown) is a great team, they’re a high-energy team. We just knew we needed to match it. We always talk about we want to create our own energy. Today it’s a lot easier when we have a packed house, but no matter who you’re playing or when you’re playing you have to have that energy, that same drive, and just jumping out on teams it’s a great advantage. You just demoralize them.”

The lead was never in jeopardy the rest of the way.

Brett Eberly scored a game-high 16 points for the Warriors while Erik Timko added 15 and Kropp and Woodward each had 13.

“That’s one of the great advantages we have,” Woodward said. “We have four guys — four great seniors — that can really just take over a game at any time. You see Owen — Owen’s getting a lot of his points in transition off of his defense. He’s a great defensive player. Brett sets everybody up and, when he’s open, he’s not afraid to let it fly. Erik and I are two more centerpieces of the offense that we design a lot more stuff for. We just try our best not to let what other people say — this person should be the top scorer, or that person should be the top scorer, or we should be running plays for this person — we just try to run our stuff and get open shots for whoever.”

Woodward, the 6-foot-10 center headed to Colgate, stuffed the stat sheet in the win. He had nine rebounds, four assists and two blocks to go along with his 13 points.

“I’ve always prided myself on being a really good passer,” he said of his assists — all coming in the first half. “I always try my best to set up my teammates, especially now that teams are really keying in on me — they were keying in just as much last year, so I just try to find my teammates for easy hoops and try to run the offense when I can.”