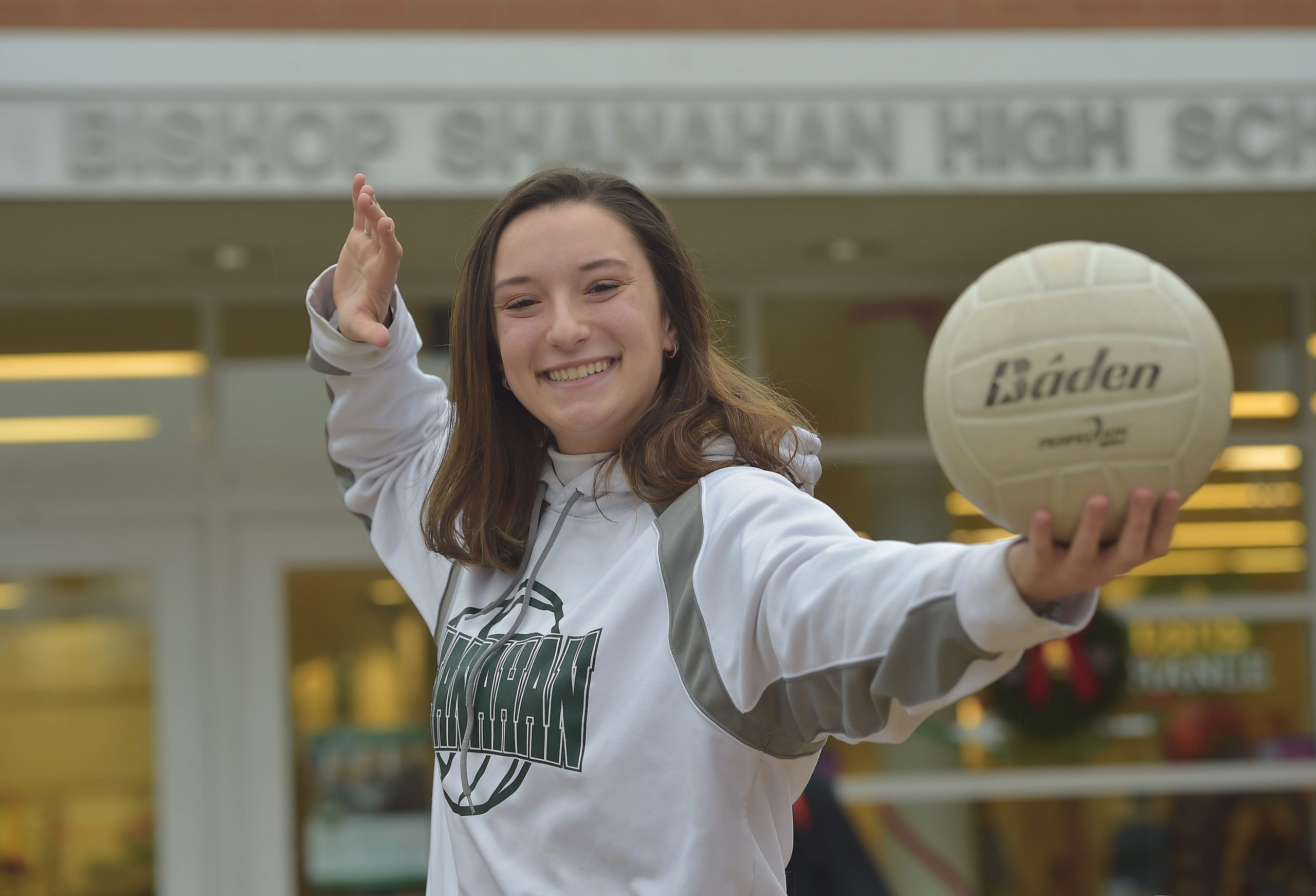 DOWNINGTOWN >> Cara Shultz, the 2019 Daily Local News Girls Volleyball Player of the Year, came within a whisker of leading the Bishop Shanahan squad to an improbable PIAA state title this past fall.

The Eagles, who had lost six of their nine starters from their 2018 PIAA 4A state finalist squad to graduation (three of them were all-state), once again made it to the state final in November, led by Shultz. And Shanahan’s final opponent was the same – North Allegheny, to whom the Eagles had lost the state final by a 3-0 score in both 2017 and 2018.

This time, the Eagles battled North Allegheny to a 2-2 draw, and Bishop Shanahan seemingly had the momentum with a dominant 25-12 win in the fourth set. And the Shanahan fans who packed half of the Cumberland Valley High School bleachers were banging on the seats in a dizzying display of energy.

“When we took the court for the fifth set, the Shanahan students in the crowd started going crazy,” said Shultz. “In fact, our student council president was leading the group, and their cheering was contagious, so pretty soon the whole gym was as loud as they could possibly be. North Allegheny fans were fired up, Shanahan fans were banging on the bleachers, and the energy at that time just seemed unreal, unlike any other game I’ve ever played.

“I remember taking the court with the other starters, and we all were just in awe at the chaos around us. I remember stepping on the court and thinking, this is my last high school match, and I still feel so blessed that it began in such an exciting and high-energy way.”

Shanahan bolted to a 3-0 lead in the fifth set, led by Shultz, who had her best performance of the season on the biggest stage (31 kills, 11 aces, 13 digs). But a Cinderella finish wasn’t to be, and the Eagles fell 16-14 in the final set, ending a most memorable season.

“After losing 4 Division 1 level players, as well as six of our starters to graduation last spring, I don’t think we expected ourselves to be as dominant this year,” said Shultz. “But every day in practice, and throughout every game or tournament, every single player on our team was 100 percent selflessly invested in the team. The wins became that much more fun, and the losses were that much easier when we were doing it with our best friends, our second family, by our side.

Call it passion, heart, never-say-die spirit – the Eagles took their emotional lead this fall from Shultz, who comes from a family who knows how to bounce back from adversity.

Her father, Ed, was diagnosed with Hodgkin’s lymphoma in 1986 but went on to become only the fifth five-year football letterman at Army, the first since 1929. His comeback was profiled in the Oct. 3, 1988 issue of Sports Illustrated. The past couple of years, Ed has continued to battle health issues, but his consistent courage has served as a shining example to his daughter Cara.

“I think the most important thing I learned from my Dad is to fight,” said Shultz. “When things seem tough, fight your way out. When you’re losing a volleyball game, or a struggle in school, or a problem with a friend, fight to fix it. Sometimes, that could mean just fighting to get through it all.

“My dad has been in the hospital intermittently in the last two years with various health problems, and even when the light at the end of the tunnel seemed very, very far away, he never stopped fighting. Back in 1986, he didn’t stop, so why should he now?

“As I go through my life and face trial after trial, sometimes I have to remind myself to fight, even when it seems difficult. But my dad has been a great example for me in how I should take on challenges in life, and how I should live and grow as a person who fights through every day of her life.”

Shultz said she admires her mother Maria and sister Rita most of all.

“My mom has always been so brave and strong for our family, especially during the times when my dad’s health wasn’t too great,” said Shultz. “Things haven’t always been the best, but she always finds a way to bounce back, consistently be strong for my sisters and I. If one day, I am half the person my mom is, and if I am half the mother to my future kids that my mom is to us, then I will be so blessed and happy in my life.

“I also admire my [oldest] sister, Rita. First, she has shown me that my life is not defined by others’ expectations for me. I can be anything I want to be, if I work hard enough and really have the passion. In October, Rita was a great example to me of how to persevere when she ran the Chicago Marathon. I have so much respect for her strength, courage, and drive, and I am so glad that I got to grow up with her setting an amazing example for me in my life.

“My mom and my sisters [Rita, Renee and Coco] are the strong and courageous women in my life that serve as perfect role models.”

Shultz faced a difficult challenge of her own in her sophomore year when she was sidelined by a stress fracture and watched the Eagles soar to the PIAA Class 4A championship match without her. In her junior year, Shultz came roaring back with a vengeance, was named Shanahan’s Most Valuable Player, and received all-state honors as well as first team All-District 1 and All-Ches-Mont selection as the Eagles made it back to the state championship final again.

“I learned two major lessons from this injury – always try to keep a positive attitude when things don’t go your way, and live in the moment, because it could be gone in an instant,” said Shultz. “It was a humbling experience, to say the least.”

This fall, for her final volleyball season at Shanahan, Shultz was once again voted team MVP, first team All-Ches-Mont, first team All-District 1, and first team all-state. In 64 sets (Shanahan lost only five of them), she posted a .420 percentage with 337 kills. An all-around performer, she also earned 192 digs, served 88 aces and made 17 blocks.

“Cara came into this season in the best shape of her career and worked hard to bring the rest of the team to her same high standards,” said Ashman. “The biggest improvement she made this year was on her defense and serve receive. She was dominant in both of these skills and became the complete player this season. Cara also learned how to be a true leader and teammate this season and that will be missed most.”

Shultz thinks the strongest feature of her game this past fall was in communication.

“This year, the name of the game was not ‘who could hit the ball the hardest’ or anything along those lines,” said Shultz. “Rather, our team played a game of intelligence – being smart in placing our shots on the court, serving aggressively and consistently, moving the ball around to every hitter on the court. But that all doesn’t happen without communication.

“I thoroughly enjoyed communicating with everyone on the team this year – on the court and off the court. We all took part in a game where personal achievement was a non-factor. We ran plays that confused the other teams’ defenses, and we worked tirelessly to make sure that we had the knowledge of what other teams did in order to move one step ahead of our opponents.”

Ashman said, “Of all the players I have had the privilege to coach, Cara stands out as one of the tops. Cara is a joy to coach, she is motivated, disciplined, and a very hard worker. Her high volleyball IQ allows us to push her game to another level. Cara pushes herself to be the best and doesn’t accept anything less from her teammates, both on the court and with her studies.”

Next fall, Shultz will play volleyball at Yale University with her sister Renee, who was 2017 Daily Local News Girls Volleyball Player of the Year. Like Rita, Renee played for Shanahan under Ashman, and was Cara’s teammate with the Eagles for two years.

“I always had Renee’s example of how to be a good teammate, a hard-working athlete, a dedicated student, and a sincere friend – she was the perfect example for me, and she was, and still is, my friend through all of it,” said Shultz. “I’m glad that I always had her to lead the way while I was transitioning into a new period of my life, and I hope that in the last two years I was a good example to [younger sister and teammate] Coco as well.

“I feel so blessed to be able to play with my sisters for the last four years of volleyball, and I especially feel lucky that I get to continue at Yale with Renee for the next two years. I couldn’t be more excited to enter into this next stage of my career, and I’m glad I get to do it with one of my closest friends.”

Shultz is considering majoring in pre-med at Yale, among other fields.

“It really is just so fascinating how the human body works, and I think I would really enjoy a career as perhaps a doctor or physician’s assistant,” said Shultz. “I also think I would love to study psychology, and perhaps go into a field of sports psychology or psychological therapy. But I also keep in mind that I am 18 years old, and there are so many different career choices out there, and maybe something [else] will catch my interest as I enter into college.”

Shultz remains involved in many activities at Shanahan as she moves further into her senior year, among them Channel 2 Morning News, Mock Trial, National Honor Society, the Ministry Club, Italian Club, and Academic Bowl. In addition, she plans on throwing for the fourth consecutive year for the Bishop Shanahan track and field team this spring.

Ashman said, “It’s been a true pleasure to get to coach Cara over these last four seasons and help shape her into the player and adult that she has become. She will go very far in life and I wish her the best of luck at whatever ventures come her way.”