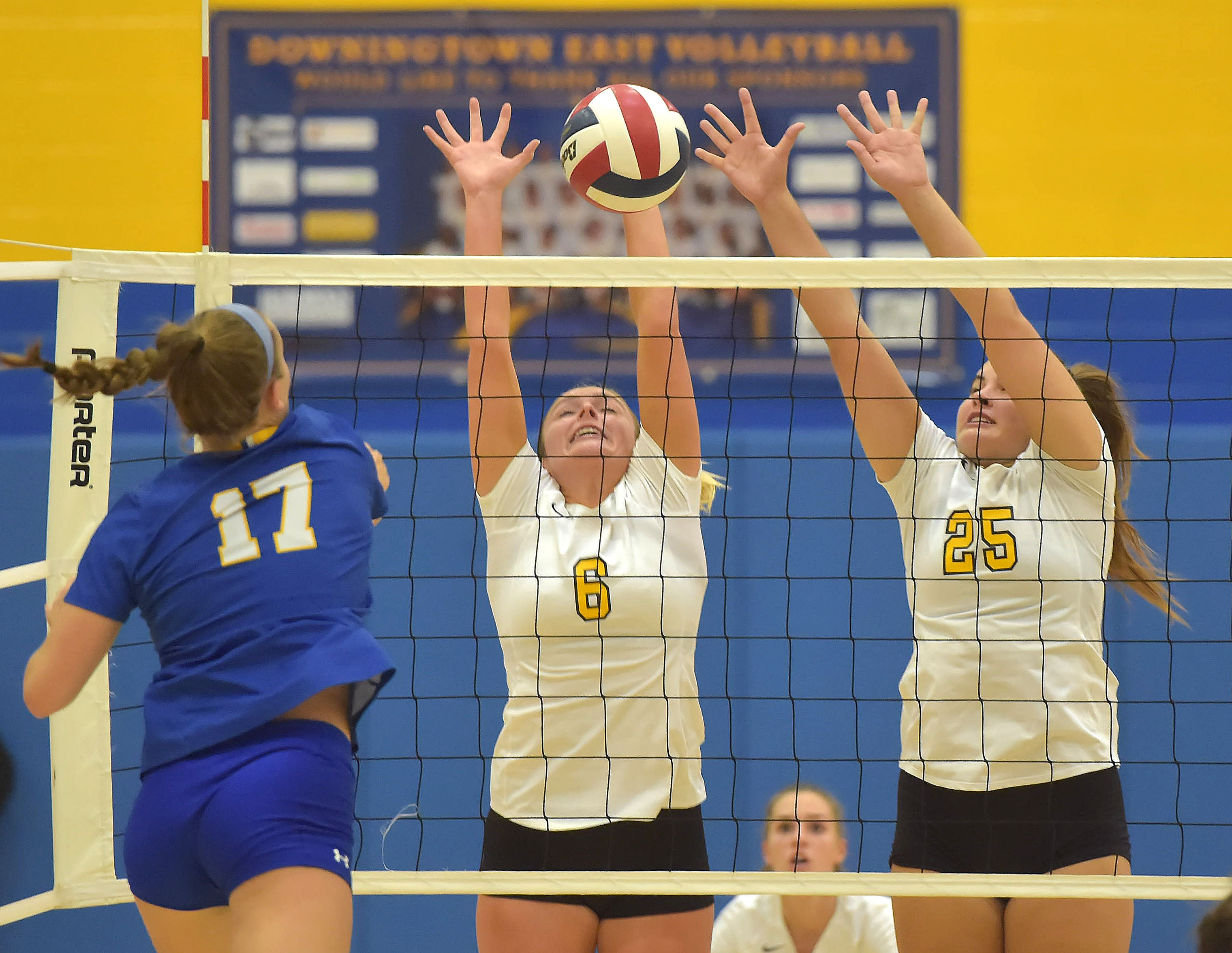 Senior outside hitter and second-year captain was MVP of strong Golden Knights’ squad, leading team in kills (273), receptions (248), aces (47) and digs (205). Was PVCA 4A all-state, first team All-District 1 4A and All-Ches-Mont.

Senior outside hitter and co-captain had 385 kills (4.2 kills per set) and 35 blocks – her 113 career blocks was the second-highest total in team history. Also came up with 241 digs and 48 aces. Was PVCA 4A all-state, first team All-District 1 4A and All-Ches-Mont.

Senior was the only libero named to the first team All-District 1 4A team. A very solid defender, she came up with 187 digs, 229 serve receptions, 36 assists and 16 aces in 68 sets. Was PVCA 4A all-state and a first team All-Ches-Mont selection.

Junior outside hitter was a powerful force for the Indians, making 339 kills, coming up with 248 digs, serving 52 aces and recording 20 blocks. Was PVCA 4A all-state, first team All-District 1 4A and All-Ches-Mont.

Senior setter and co-captain dished out 818 assists (9.4 assists per set), and her career total of 2,045 was second-highest in D-East history. Also came up with 228 digs and 26 aces. Was PVCA 4A all-state, first team All-District 1 4A and All-Ches-Mont.

Senior libero/setter and co-captain was an all-state libero in 2018, then three weeks into the 2019 campaign was moved to setter, and was the Hurricanes’ MVP, as well as a PVCA 3A all-state selection and an All-AACA and All-District 1 3A pick once again

Senior middle hitter and co-captain, a PVCA all-state selection once again as well as a repeat All-District 1 3A and All-AACA pick, recorded 27 blocks, 28 aces and 92 kills for powerful (20-3) Hurricane squad.

Senior middle hitter was a strong presence for the Indians, who advanced to the PIAA District 1 4A finals, recording 71 blocks and making 155 kills. Was PVCA 4A all-state, second team All-District 1 4A and first team All-Ches-Mont.

Under Smith, the Indians’ second-year head coach, Unionville (24-4) finished second in the PIAA District 1 4A tournament to Bishop Shanahan, and advanced to the PIAA 4A state quarterfinals.

“What impressed me most about the team this year was their unmatched desire to win,” said Smith. “They were extremely hungry to push themselves as far into the post-season as possible; which made it exciting to coach.”

The Indians defeated a tough Downingtown East squad in the District 1 4A semifinals to advance to the district final against Bishop Shanahan. One of Smith’s favorite memories of the past season was a hard-fought 3-1 win against the Cougars Oct. 14, in which Unionville posted scores of 25-23, 18-25, 25-20, 26-24.

“Going into the match, there was enormous pressure on both teams since we had similar overall records,” said Smith. “We knew it was going to be a tough fight and, as expected, Downingtown East battled as hard as they normally do. It took everything that the girls had to pull out a close win in the fourth set. Those fantastic memories of that match will stay with me for a long, long time.”

Smith played volleyball for Unionville under coach Rob Conti-D’Antonio, then played for Cecil College. Before she joined the coaching staff at Unionville five years ago, Smith was the head coach at Coatesville High School for a year and an assistant coach at Penn State University – Brandywine.

She also has been coaching for Sparks Volleyball Club since 2012 and has been the co-director for Sparks Beach Volleyball for the past three years. Additionally, she helps her husband, Immaculata men’s and women’s volleyball head coach Rob Smith, as a volunteer assistant coach.

Smith is attending USAV high performance as an evaluator and completed her USAV indoor IMPACT, USAV outdoor IMPACT and USAV CAP I certification. When she’s not coaching, or “chasing my 3-year-old-son around” Smith plays in local volleyball leagues and tournaments.