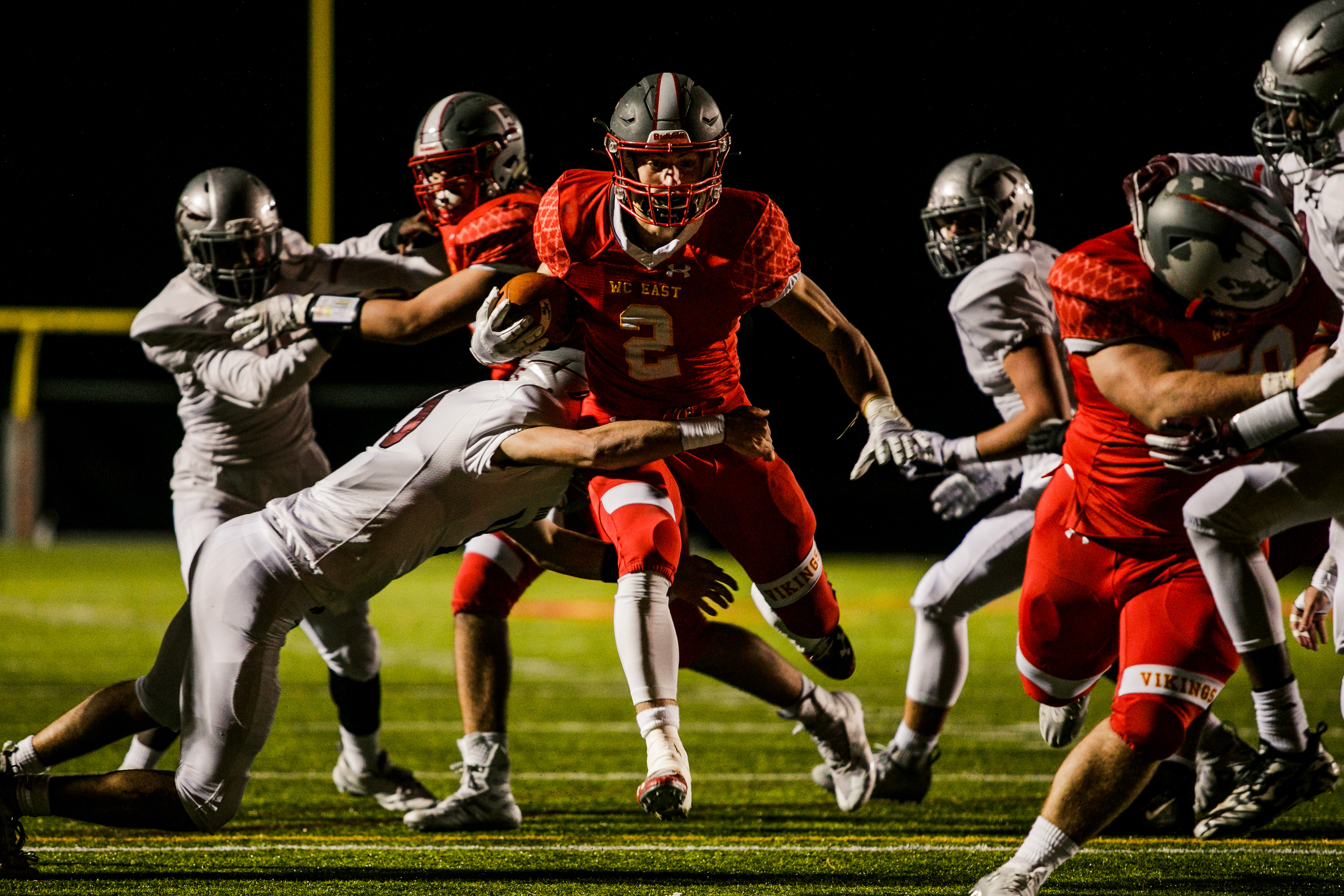 The Kansas St. recruit led his team to a district title with 2,763 yards and 29 TDs through the air, while running for another 252 yards and 14 scores.

As the main back in a talented backfield, he rushed for 1,615 yards and scored a total of 23 TDs.

Registered his third straight 1,000-yard receiving season, with 1,015 and 15 TDs on 60 catches. Also scored 11 other times on carries or returns.

Broke out as a speedy return man who became the Whippets’ top receiver with 42 receptions for 860 yards and eight TDs.

An All-Central Leaguer on both sides of the ball, he tied for a team-high 23 receptions, leading to 266 yards and five TDs.

The next great Cougar lineman was called upon early and often to lead the way for two 1,000-yard rushers.

After transferring from Garnet Valley, he fit right in as a dominant blocker in the middle of the Friar’s line.

A heady grinder for the Vikings, he helped clear the way for the league’s leading rusher.

With Ortega banged up much of the season, Santiago’s protection was key and he did it very well.

A two-way starter and captain for the Whippets, his veteran presence was felt on an inexperienced line.

The Whippets broke the Chester County record for points in a season, and Mochulski was a major weapon.

Arguably the top defender in the area, he was continuously in the backfield and had two interceptions and a fumble return for a TD.

The other side of West’s devastating defensive end duo, Hale used his speed to create havoc.

A two-way star, he buoyed the Ches-Mont’s top defense in points and yards allowed.

Seemed to get better as the season went along, Engler was a force from the end position.

Despite rushing for almost 1,800 yards, Cox was known for his defensive prowess and always being around the ball.

An emotional leader for the Red Raiders who also caused major problems rushing the passer.

A three-year starter, Noble finished out a stellar career as the top defender for the Cougars.

Known as the mouthpiece of the defense, Gripton paired with Noble to form a staunch linebacking corps.

Led the Friars with three interceptions as an aggressive, shut-down cornerback.

Tied for second in the league with four picks, good for half of the Cougars’ interceptions.

A pretty good player on both sides of the ball, Schilling picked off two passes for the Indians.

Doubling as a receiver, Stewart intercepted three passes from his safety spot.

For a team that sometimes struggled to score, Mahoney flipped the field better than anyone in the league and helped the Devils stay in games.