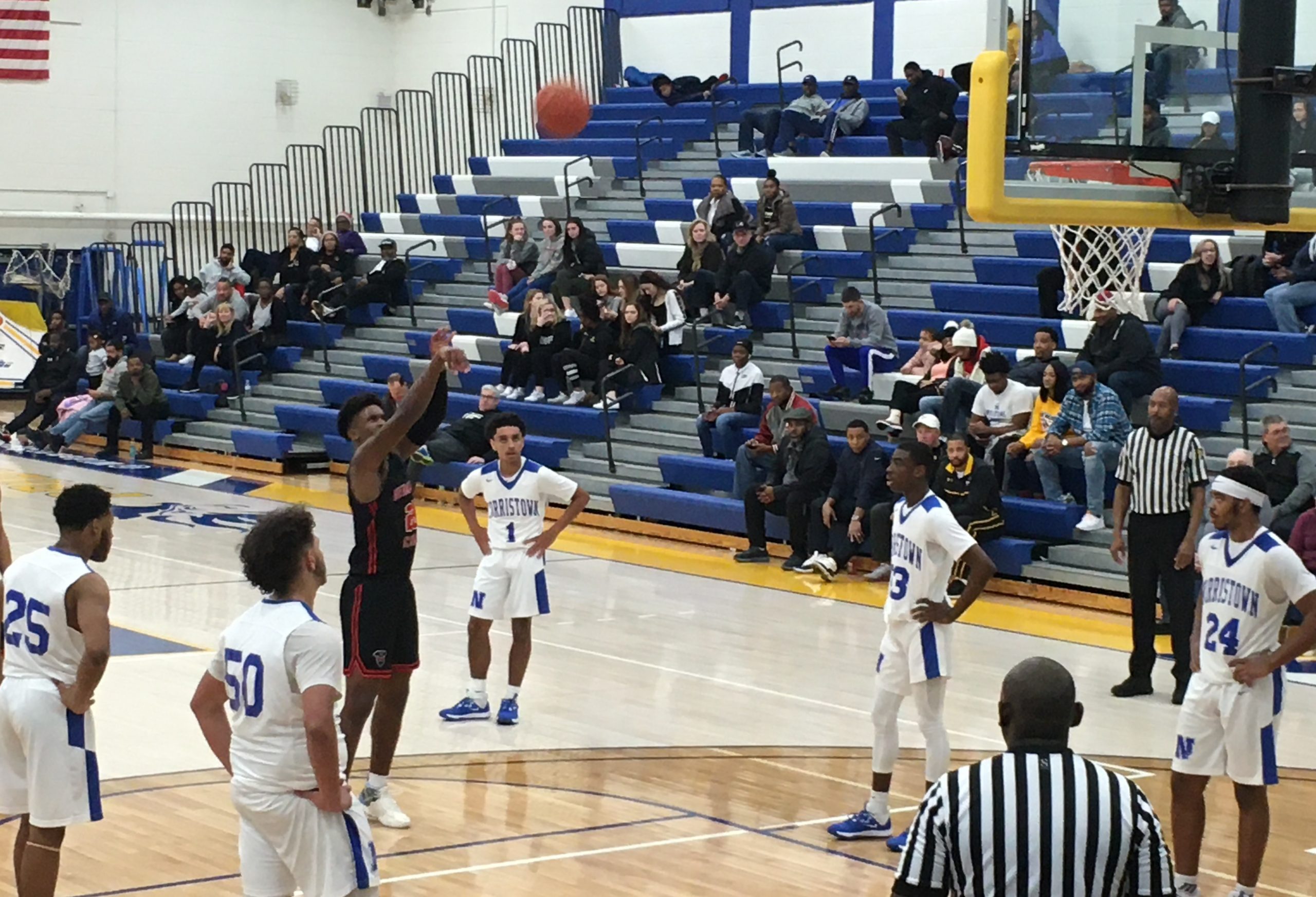 CHESTER >> Jordan Longino was not going to settle.

Norristown had just cut Germantown Academy’s lead to one midway through the fourth quarter when the GA junior guard decided it was time to close. Longino converted back-to-back three-point plays the next two possessions and threw down a dunk a couple minutes later to restore the Patriots’ lead.

Longino scored 10 of his 30 points in the fourth as the Patriots topped the Eagles 60-50 at the Pete and Jameer Nelson Play-By-Play Classics event at Widener on Saturday.

GA put Norristown on its heels through eight minutes. Longino, who said he felt strong in warm-ups, hit his first four shots as the Patriots blitzed the Eagles for 22 points in the frame. While the offense was in tune, GA’s defense was just as locked in, holding Norristown to just six points.

Eagles coach Dana “Binky” Johnson knew his team would be tested during its next stretch of games and Saturday gave his relatively young team an opportunity to play from behind. It’s not something Norristown has seen much this year and down double-figures early, the Eagles had to find their way back in.

“I was very surprised the way we came out tonight, I think this was the second time all season our inexperience showed,” Johnson said. “That’s the purpose of playing events like this, the younger guys get the experience and exposure of this kind of atmosphere. They understood at halftime, a lot of guys were saying the speed was different and the intensity was different.”

Norristown settled in during the second quarter, with all its points coming from its top two guys in Willie Anderson and Nazir Kinney and sparkplug Chris Dinolfo off the bench. Dinolfo, who totaled 14 points for the game, helped turn things around on the defensive end toward the end of the first quarter.

He chipped in three steals, took a charge and nearly had two other steals while hurling himself around the floor without hesitation. Johnson said the guard is the team’s “Microwave” and is an asset because the Eagles don’t lose scoring or defensive energy when he steps on the floor.

A 6-0 run by Norristown to end the second quarter closed the gap to 32-21 at the break and the Eagles branched it into a 10-0 run at the start of the third quarter. Longino snapped that run with a jumper, but Kinney, Anderson and Dinolfo put together a 10-4 run that had Norrsitown within 38-35 before Jake Hsu beat the quarter buzzer on a three for GA.

“We always talk about carryover,” Johnson said. “We didn’t really defend in the first half, we were two steps behind and it’s tough to gain ground that way playing against such a good player like Jordan is. He took advantage of it, our help side wasn’t there, we didn’t stay attached to him and gave him some easy looks.

“There were several things we took away from tonight. We haven’t played from behind a lot, I wanted to see how they battled back and it was a very, very good sign there was no quit.”

Longino, who had 16 at the half, was relatively quiet in the third with just four points and Norristown’s defense was able to hold the Patriots to just nine as a team in the quarter. The junior felt like his teammates still did a good job of not getting sped up the way Norristown wanted them to play while maintaining their lead.

Norristown tried just about everything to slow Longino down. The Eagles put longer defenders like Anderson and Kinney on the high-scoring guard but also tested him with smaller guards like John Paulino, DJ Johnson and Dinolfi.

“It’s tough because he plays at his own pace,” Johnson said. “He doesn’t let you speed him up and that’s what the good players do. They control the tempo and tonight he did good job of that. We tried to speed him up with some smaller players and he made us pay in that situation because he gave the ball up and made his teammates better.”

Longino had two assists but also knew when to get the ball out of his hands, something GA coach Matt Dolan noted earlier this season has made it easier for Longino to close games.

“I’ve seen that kind of defense since I was a freshman, so I’m used to it,” Longino said. “It’s changing paces, knowing how to get open, knowing how to set my man up and get to the rim, it all really helps.”

Norristown, which got 19 bench points Saturday, used a 6-2 run with three baskets from three different reserves capped by Marshall Baker’s short jumper to whittle the lead to 46-45 with 4:15 left.

Longino called his own number on the following possession, taking the ball down the right side, driving along the baseline and drawing contact on the finish to push the lead to 49-45 with 3:56 left. Tayshaun Mack poked the ball away from Norristown, it found its way to Longino and the junior went right down the lane, double-clutching and tossing one up as he got fouled, the ball dropping in for another and-one.

“I didn’t want to settle,” Longino said. “In the first half, I think I settled for too many threes and there, I wanted to get to the rim and get fouled. They were pressuring me, so I knew I would get fouled if I attacked the rim, so I tried to do that.”

The dagger came with 1:47 left, when Casey Traina drove to suck in the defense, then tossed it back to Longino crashing off the left win for the thunder dunk, giving him 30 points for the fifth time this season.

Both squads are back at Widener on Monday. Norristown will face Malvern Prep’s potent offense while GA will clash with Bishop McDevitt.

“It’s a good tournament for us to help with the Inter-Ac,” Longino said. “McDevitt is a really good team, I know a couple guys on their team, it’ll be physical. These guys today, they wanted to pressure us and speed us up so it all helps us.”