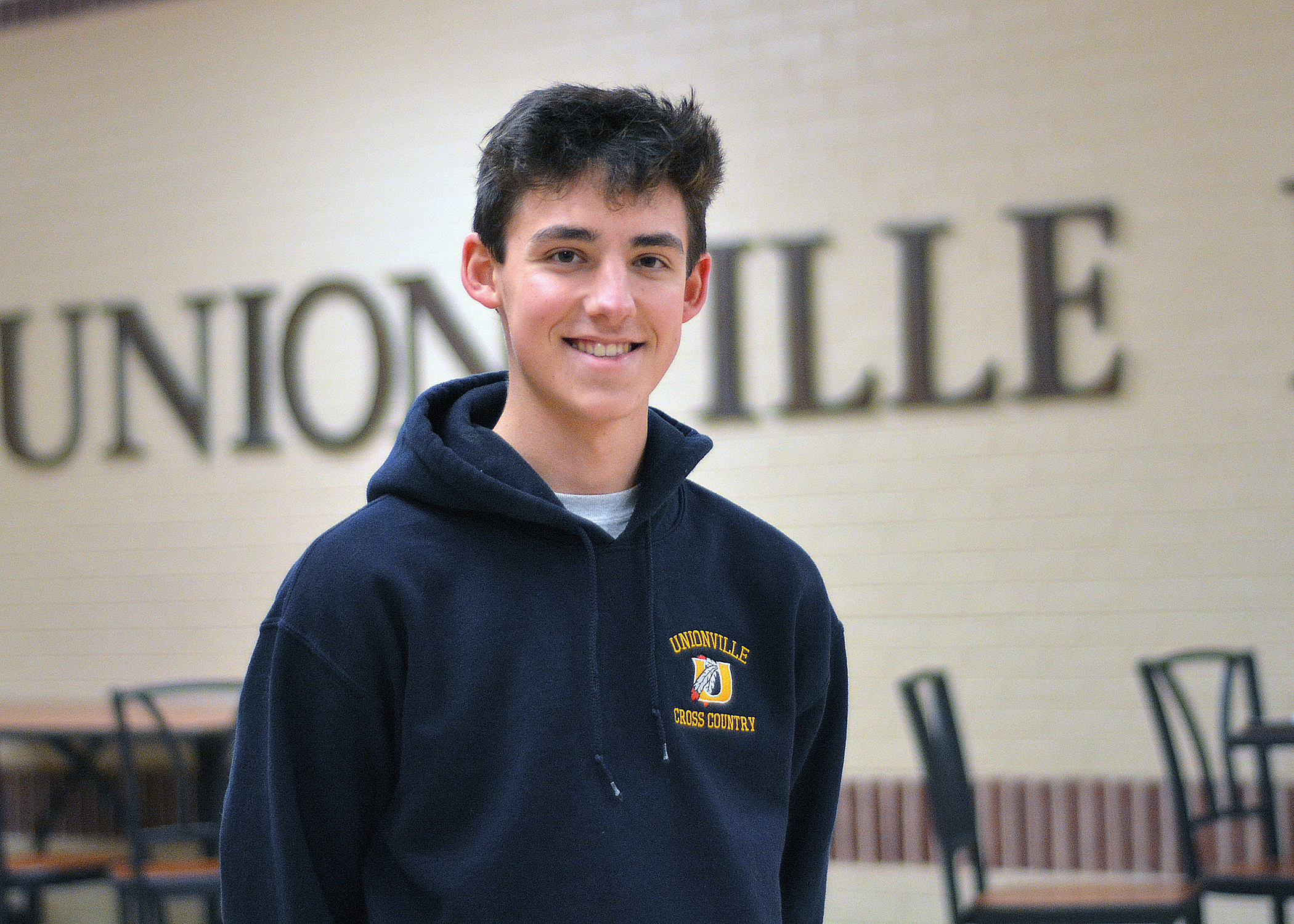 Over the past three years, Unionville has had a runner, either on the track or on the cross country course about as reliable as can be in Cole Walker.  This fall, Walker led his team to a team title at the Ches-Mont League League championships, while winning his own individual title in dominant fashion, then added a District 1 Class AAA championship, and a fourth place finish at the PIAA championships.

“It was a really great season both for myself, and for the team,” said Walker.  “It really started with the work put in in the summer, and I really started to become more of a leader.  We worked together to try to lift us all up to pushing ourselves as hard as we could.”

The first big win of the season came at home, as Unionville hosted the Ches-Mont championships.  Walker was dominant in taking home the individual title, coming across the finish line in 15:46.3, a good 23 seconds ahead of teammate Ethan McIntyre.

“The league meet really meant a lot to me,” said Walker.  “To win the way I did on my home course, and to have our team win at home, was really amazing.  I know Downingtown West (the eventual state champions) were missing a couple guys, but it was still a great team win.”

Up next came a trip to Bethlehem, PA for the District 1, Class AAA championships.

“The district meet is always really important to me,” said Walker.  “It had been a goal of mine ever since I started running back at Patton in middle school to win Districts.”

Win it, he did.  But unlike the league meet where he wasn’t really pushed, this one came down to the wire.  Walker just barely edged West’s Aiden Barnhill by half a second, to win District 1 gold.

“I came in having just battled off a cold, and knew there were a lot of guys in the district really stepping it up,” said Walker.  “I’d kind of struggled the whole way, and I knew it was going to be close.  Then Aiden (Barnhill) started his sprint really early and put a pretty good gap between us.  But I eventually closed it, and took the lead in the final ten yards or so.”

Looking back afterwards, Walker realized what he had done.

“It was really emotional for me,” said Walker. “I was actually having a pretty bad day and to be able to overcome all that and get back to my normal zone and come back to win it.”

Walker finished fourth at the state meet.  Not exactly something to sneeze at, but unsatisfying for Walker nonetheless.

“I was hoping to do better,” said Walker.  “But knowing I wasn’t anywhere near where I needed to be physically, I wasn’t really unhappy.”

Walker will look forward to getting back on the track in the spring, but enjoys what he has in the fall.

“Given that I am a distance runner, I tend to get along best with other distance runners who know the same kind of willingness to endure pain I do,” said Walker.  “We all have learned to embrace the grind, so I am probably closer to the guys on the team in cross country.  But I think individually, I have more confidence on the track.”

Once his time at Unionville is through, Walker will be headed to Villanova, where he’ll major in business and continue his athletic career.

“They have, consistently, a top 25 program in the country,” said Walker, and a top-notch business school with connections all over, so I am really looking forward to that next step.”