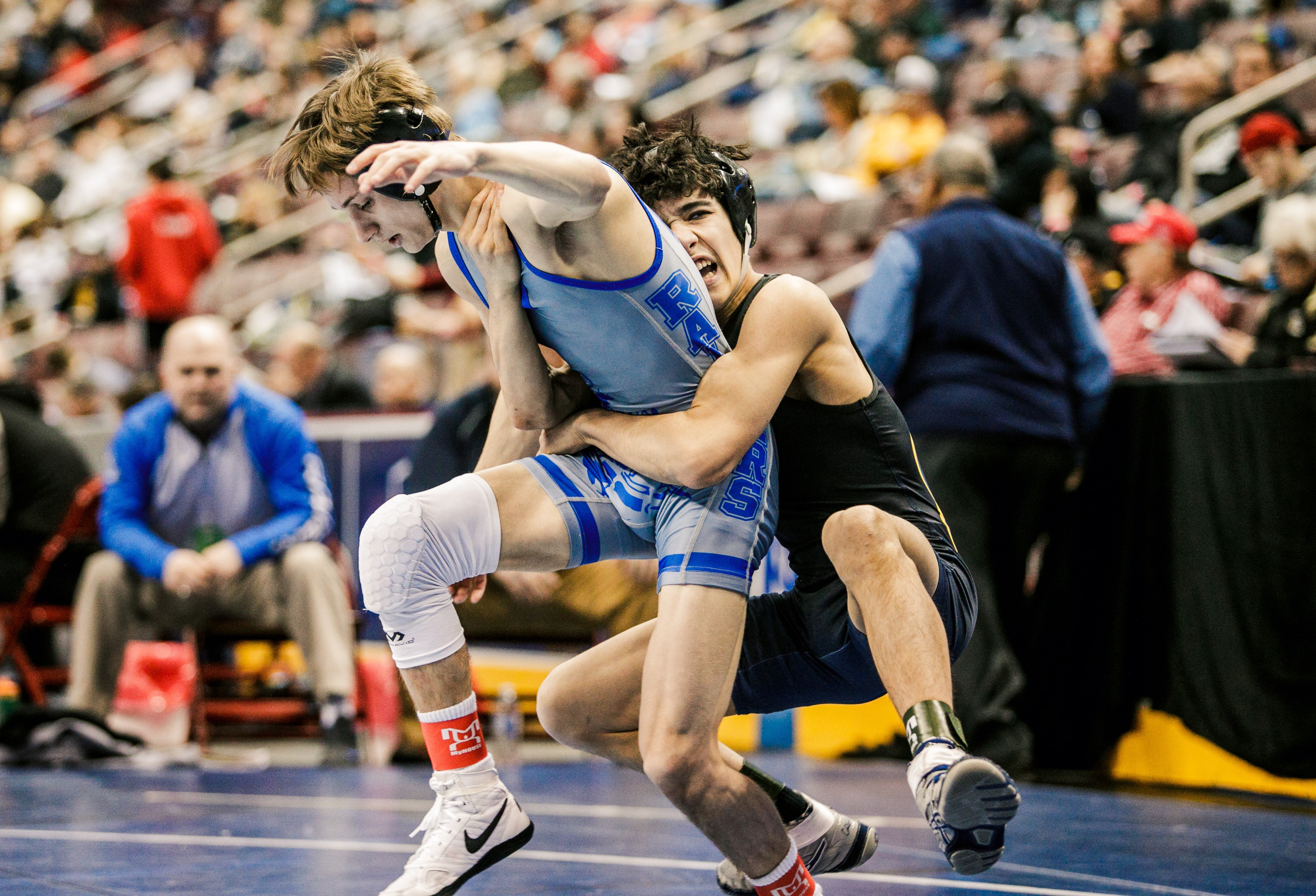 Pope John Paul’s Matt Vulakh finishes his first takedown against Reynold’s Gary Steen in a 5-2 win in the 106-pound first round during last year’s PIAA Tournament. A new petition would raise the lowest PIAA weight class from 106 to 110 pounds.

A lineup of 12 weight classes was the norm in Pennsylvania high-school wrestling for many years.

That number continued through the 1980s to the 1990s, when it went up to 13, and then increased to 14 in the 2000s. Now, the state’s governing body is looking to take the sport in the opposite direction.

The Pennsylvania Interscholastic Athletic Association (PIAA) is seeking to change weight class configuration at the high-school level for the 2020-21 season. Weights will go back to 12 from 14.

The PIAA board of directors recently passed a provision to petition the National Federation of State High School Associations (NFHS) in 2020 if the national body’s rules committee does not reduce the number of wrestling weight classes by two for the 2020-2021 academic year.

The PIAA will request a three-year pilot program, in that eventuality, to drop the number of weights, citing an increase in forfeits in the lower weights. The lightest weight class is currently 106 pounds, but would be raised to 110, which marks the biggest change under the PIAA proposal.

“We’ve had a couple years to look at it, and probably next year will be the third, maybe the fourth, that these weight classes have seen an increasing number of forfeits in the lower weights,” PIAA executive director Robert Lombardi said. “We think our proposal is a better distribution than 14 and cuts down the number of forfeits and make dual meets more pleasing to fans and to coaches.”

The PIAA also passed a proposal to reduce the number of junior-high weight classes from 18 to 15, as well as a change that would allow varsity programs to enter a second wrestler in the same weight class in tournaments with nine or more teams.

The idea to address the number of forfeits in duals comes at the expense of fewer wrestlers getting opportunities to compete in the individual postseason. Additionally, fewer spots in the starting lineup will mean fewer varsity matches throughout the dual season as well.

“That’s especially true in the lower weights, where high school athletes continue to get bigger, stronger and faster,” Lombardi said. “The lightest weight class in high school wrestling has risen over the years from 95 to 98 to 103 to 106 and now to 110 if the PIAA gets its wish in 2020.”

Lombardi said the PIAA feels comfortable with the number of postseason opportunities available to wrestlers with Pennsylvania’s 20-man brackets.

“We feel that we have more than enough opportunities because of our expanded 20-person bracket, that anybody worth their salt will have a chance to go in,” Lombardi said. “We have also noticed that kids are bigger, stronger and faster than they’ve ever been, by better training techniques. So I’m not sure if some of our very low weights help us compared to where the growth of the athletes is going.”

“The reduction in opportunities for younger and lighter wrestlers was the biggest complaint among coaches polled,” Northern Lebanon coach Rusty Wallace Jr. said. “As it stands, wrestling is one of the few sports that allows a 100-pound freshman to rank among the elite in the state, which continues to be jeopardized by raising the lowest weight class.

Spring-Ford coach Tim Seislove was one of the area’s wrestling coaches who had success wrestling in the lower weight classes. (Nate Heckenberger – For Digital First Media)

Upper Perkiomen head coach Steve Adam, himself a wrestler at Brandywine Heights in the early 1990s, is particularly vocal in his opposition to the proposal.

Tony Haley, back this winter for a second go-round heading the Methacton wrestling program, would support taking the number of weight classes down one notch from the current alignment.

The talk of eliminating the 106-pound weight class doesn’t set well with a number of Pioneer Athletic Conference coaches whose scholastic backgrounds were built on the foundation of participation at that level.

Pope John Paul II first-year head coach Chris Sheetz was a third-place state medalist at 103 his freshman season (2005), a weight class at which he competed for all but four of 48 bouts that year. He went on to be a state champion at 112 as a sophomore, the second of four state medals he achieved during his scholastic career.

“I don’t like eliminating 106,” Sheetz said. “I don’t think it’s good for the sport. It would be a shame if little guys couldn’t wrestle.”

“The biggest problem I don’t want to see is raising the lower weight class,” he said. “It takes away from the little guys.”

In that same vein, Seislove — he’s had in excess of 30 wrestlers on his rosters the past five years — does not support a reduction in weight classes.

“This weight has been the starting point for many of the best wrestlers in the sport,” he said. “These wrestlers have gone on to have amazing collegiate wrestling careers.”

Steve DeRafelo has worked in recent years with sizeable rosters at Owen J. Roberts, having 44 grapplers on the team in 2018-19. Still, the 1988 Great Valley graduate and four-year varsity-level competitor in the Patriots’ mat program sees the forfeits issue impacting the sport.

“I believe that the PIAA had to do something in response to the high number of forfeits in high school dual meets,” DeRafelo said. “At Owen J. Roberts, we have been fortunate enough to field a full line-up the last few years. However, we realize that there has been a lot of dual matches around District One with multiple forfeits.

“The forfeits are not good for the promotion of the sport. Spectators come to matches to watch student-athletes compete against one another, not watching multiple kids have their hands raised without contested bouts. Hopefully, this move will address this issue.”

Adam is strong in his opposition to reducing the number of weight classes.

“You don’t see the PIAA cutting opportunities in any other sport,” Adam added. “In fact, sports like football, basketball, baseball and softball have added classes. They have increased the number of champions. If the NFHS were to adopt the PIAA’s proposal, there would be several thousand fewer opportunities for wrestlers to compete nationwide. This would be disastrous for the future of the sport.”

Adam, for his part, sees a reconfiguration of the current weight class number being a better solution to the forfeit problem.

“I feel the one thing that the PIAA data has overlooked is the lack of weight classes where there is the greatest participation (or least forfeit percentage),” he said, “If you look between 132 and 152 pounds, why not add a weight class there?

“There should definitely be five weight classes between 132 and 152 pounds, instead of four weight classes. I would prefer to eliminate 220 rather than 182. In college, if you weigh 220 you are wrestling heavyweight. So you may as well get used to it in high school.”

Neither the NFHS nor the PIAA is expected to bring the subject to a formal vote until April 2020, at which point the organizations will have an opportunity to reassess their plans with the benefit of another season worth of data. If the NFHS doesn’t act and reduce the number of weights nationwide, the PIAA would step in and make its request for a pilot program.