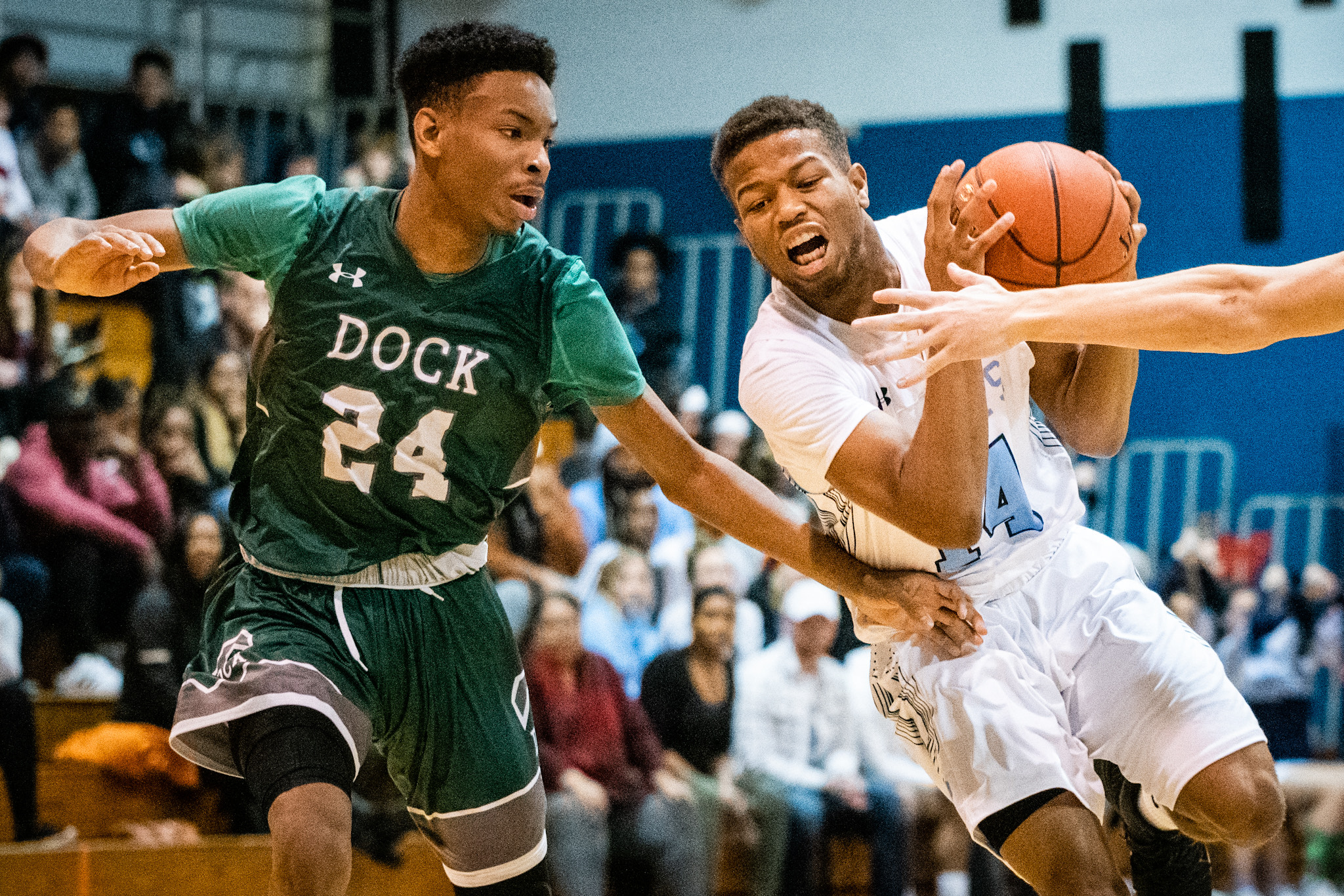 Four times, the Knights ran the same play for the senior guard and four times, Barrow canned a 3-pointer from the left wing in the fourth quarter of Monday night’s wild win over Dock Mennonite. After a dismal third quarter, North Penn buckled down and clawed back into the game.

A tip-in by Rob Carangi with 12 seconds left was the difference as North Penn survived a late look from Dock for a 69-67 victory.

“We kept running a set play that was allowing me to get open and it was just a matter of me hitting my shots,” Barrow, who scored 17 points and didn’t miss a shot in the fourth, said. “It gets the crowd hype but I just practice there the most and it’s where I mainly shoot threes. With Joey (Larkins’) penetration, the defense collapses so that spot is usually open.”

Second off mark
Coley wild layup misses but Carangi the board and stickback with 12.1 left

Monday’s contest was a homecoming for Dock coach Mike Fergus, a health and physical education teacher in the North Penn district who spent 12 years coaching the boys basketball program. North Penn’s student paper, The Knight Crier, reported last week that Fergus will be retiring from teaching at the end of the month.

Fergus, who had plenty of greetings to make before and after the game, insisted it was no different to him than any other game he’s coached but admitted his players really wanted to win it for him. Dock point guard Ralph Saint-Fleur shrugged off a fever to play and sharpshooter Steve Martin returned for the first time in 10 days off an injury to spark the Pioneers.

Ultimately, it was foul issues in the first half that put Dock behind until a big third quarter run.

“We had to take the press off and our game is press and run,” Fergus said. “In the third quarter, we erased the deficit and got the game back in our favor until they hit three or four big threes on the same play and we didn’t guard it very well. That was a great high school basketball game, if you’re a fan of high school basketball, it was a packed gym and loud and credit North Penn.”

After a fairly even first quarter, Dock used a 9-2 run fueled by three 3-pointers from Martin to go ahead 22-18. Foul trouble caught the Pioneers there as North Penn (2-4, 0-2 SOL Continental) scored the next eight points, six at the foul line to kick off a 15-2 run capped by a Carangi dunk for a 33-24 lead.

Billy Coley hit a pair of treys in the run and Matt Swanson’s late score sent the hosts into the break up double digits at 38-28. Carangi, who had 14 in the win, scored on a feed from Josh Jones to make it 44-30 with 6:27 left in the third frame.

Then, things started to fall apart for the Knights.

“We knew they would try to speed us up, we did a nice job in the first half but that third quarter, we let them speed us up,” North Penn coach Jon Conrad said. “That’s the game they want to play and if we were able to beat the press, we were never able to really get ourselves into anything on offense.”

BOYS BASKETBALL FINAL: North Penn 69, Dock Mennonite 67
Pioneers get a great look but it rims out at the buzzer as Knights rally and hold on pic.twitter.com/7JWFTojTHr

Devon Jainlett and Dallas Wilder-Hamilton sparked a defense-led 16-0 run, with Wilder-Hamilton giving Dock a 44-43 lead on a three-point play. Dock would extend it to an 18-1 run over the final 5:25 of the frame and take a 48-44 lead to the final quarter.

“They tried to rush us, so it was important that we played the way we wanted to play and not the way they wanted to play,” Carangi said. “It’s like Coach always says, we had to rally together, play for each other and use each other to get back into the game.”

“We were beating ourselves by picking up the ball when they were pressing,” Barrow said. “We had to use quicker passes and stop holding onto the ball. We were hurting ourselves basically.”

Martin, who had a game-best 23 points, converted an unusual four-point play to start the chaotic final frame. The guard picked a pass for a steal, got fouled going up, made the bucket and instead of the and-one, got two free throws after the officials called an intentional foul.

Larkins, who had a big final frame, canned a three for the Knights’ first bucket since the third quarter and after a hoop by Dock center Darius Ellis, Barrow hit three straight threes in a two-minute span with the last staking North Penn to a 57-54 lead with 3:51 to go.

“You never think about winning, you just play out the game and try to win,” Barrow said. “The attitude was just to keep pushing and keep trying to win.”

Martin hit a trey to put Dock up 60-59, only for Larkins to find Barrow off a pick-and-pop for his fourth triple of the quarter and a 62-60 lead.  Ellis, who scored 19 against North Penn’s big front line, converted a three-point play ahead of Larkins and Wilder-Hamilton trading layups.

North Penn’s Josh Jones is met by Dock’s Steve Martin (24) while driving towards the net during their game on Monday, Dec. 23, 2019. (James Beaver/For MediaNews Group)

The Knights made three foul shots to regain the edge at 67-65, but Saint-Fleur was able to score through contact to knot it up with a minute left. Dock missed a pair of free throws with 34.3 left, setting up the go-ahead bucket.

Coley drove into the lane, tossing up a wild shot that didn’t fall, but under the basket, Carangi was battling for space.

Dock called timeout with 8.1 left, setting up a final play. The Pioneers got a terrific look, but Jainlett’s corner three rimmed out just ahead of the buzzer, giving North Penn a much-needed win after a tough start to the season.

Carangi and Barrow felt it could be a starting point for something, with the Knights playing in Perk Valley’s holiday tournament later in the week.

“This is huge, especially because we’re getting our full team back,” Barrow, who missed some earlier games with injury, said. “We’ll have Mike (Chaffee) back, so we’ll finally have the full team and can hopefully get the chemistry going. We fought hard, saw we can come back and worked as a team.”

Dock, now 5-2 (3-0 BAL Presidents), ends its Odysseus-like seven road game start to the season and finally gets to go home for its annual holiday tournament this weekend. Fergus wanted his team to have an identity by then, which feels it has, and Dock will now look to hone that on its home court.

“Our guys have a lot of heart, they play really hard, I do think we have an identity and I think we’ve figured it out,” Fergus said. “For us to be good, we have to push the ball, we have to press and we have to run. When we play like that, we’re pretty good.”