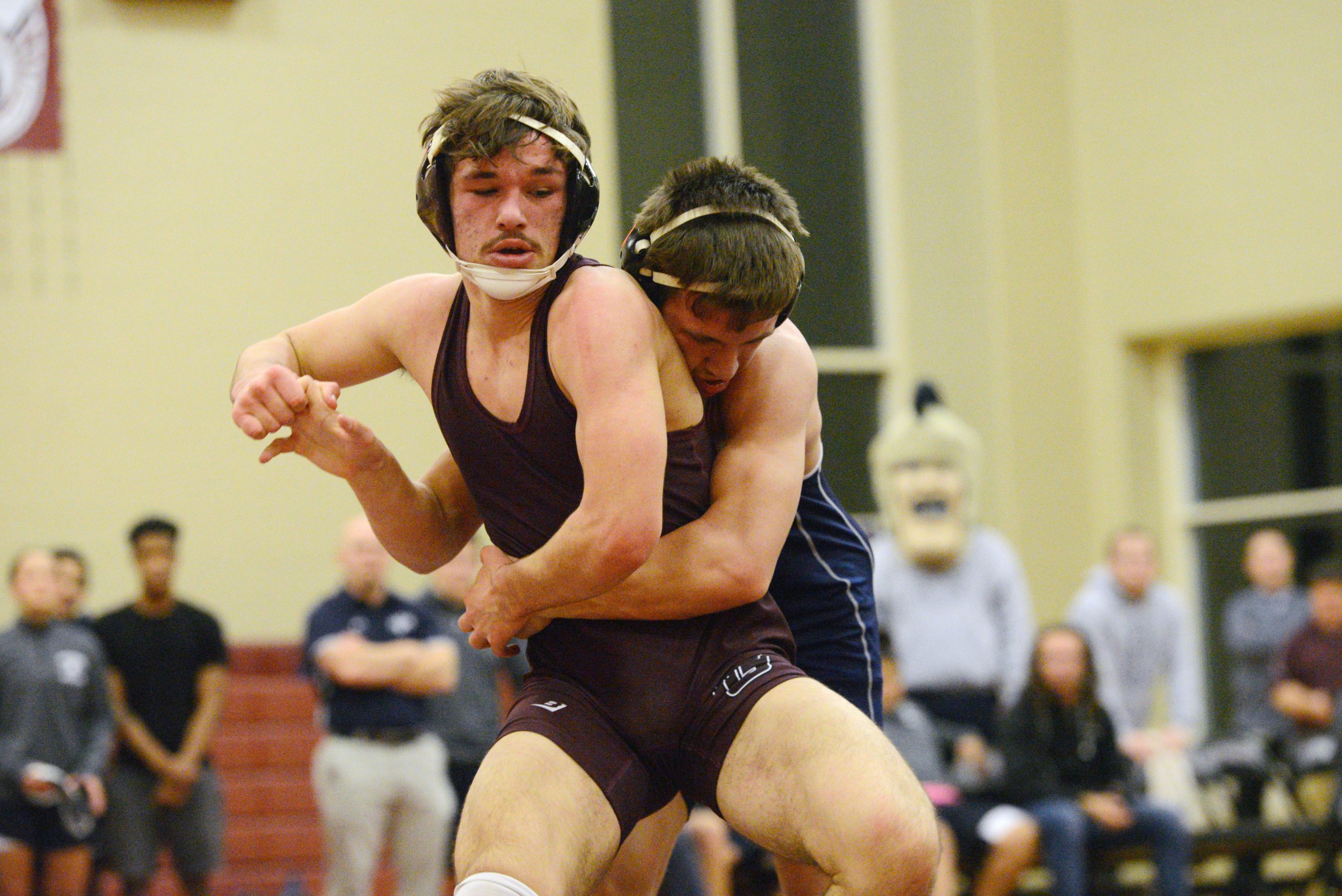 The Border Battle Pottstown and Pottsgrove have staged for years added its latest installment Wednesday. After two years of being held at the Sunnybrook Ballroom, the tussle between the neighboring rivals was held at Pottsgrove. The change of scenery, though, didn’t take away from the intensity and hard charge that are trademarks of their mat duel.

The Falcons got defense of their Pioneer Athletic Conference Frontier Division title off to a good start, racking up a 51-20 win. It was also a notable night for the Trojans, who saw teammate Juliana Figueroa named their Outstanding Wrestler while the rest of the lineup showed improvement from last week’s handling by Owen J. Roberts.

Pottstown (1-4) led through the first four bouts before Pottsgrove (3-4) pushed in front at 170. The home team, coming off a 2-1 outing at West Chester East’s Colley Classic last weekend, took eight of nine weights after its own OW, Stephen Hennelly, got a 15-11 lead with his pin at 170.

“At this point, we’re rounding into the team we want to be,” Pottsgrove head coach Jeff Madden said. “In a rivalry like this, anything can happen. These guys are used to wrestling each other.”

Figueroa provided considerable inspiration for Pottstown, her pin at 120 giving her falls over Pottsgrove opponents two straight years. The junior, who built a 7-3 lead in the first period before getting the slap at the 2:27 mark, is working her way back from a hematoma in her leg sustained during a Powder Puff football game this fall.

“This is my first match coming back,” she said, adding this was her second week of action. “It was the end of September when I discovered it.”

“She’s worked hard,” Pottstown head coach Nick Wade added. “It was cool for her going out and getting the win.”

Hennelly’s OW performance was a 1:07 pin that, coupled with the Trojans getting deducted a team point for unsportsmanlike conduct, took Pottsgrove from a 12-9 deficit to a 15-11 lead that survived Josiah Wiggins’ 9-4 decision at 182 that cut the edge to one point.

“It’s been a grind for the most part,”Hennelly said. “Win, lose or draw, you have to go back to the practice room. But I feel if I work hard on all aspects — wrestler, student — all my goals will work out.”

“Overall, we wrestled well,” Madden said. “Luke Cerrito at 32 came back very strong and battled out.”

Cerrito opened an 8-1 lead in the first period, then went 5-5 with Jones in the second before the Pottstown freshman closed the spread in a 6-1 third frame.

“They were both good,” Wade said, “but I think Jones was better in the gas tank.”

Demond Thompson got Pottstown started with a 1:21 fall at 138 before Josh Cerrito pulled the Falcons even with his 1:22 pin at 145. Jared Hewitt put the Trojans back in front with a 36-second drop at 152, but Shane Caffrey outlasted Pottstown’s Bobby Richards 13-10 at 160.

Josiah Wiggins’ 9-4 decision at 182 were the Trojans’ last points until Figueroa scored her pin. It was considerably more production than Pottstown mustered in a 73-3 loss to Owen J. Roberts one week ago.

“We knew coming in it was going to be a battle,” Wade said. “A lot of individual competition. We’re a young team … Thompson and Zach are our only seniors who’ve wrestled four years.”

Pottsgrove will continue its pre-holiday schedule by participating in the Upper Merion Duals Saturday. It will then join Pottstown and fellow PAC teams Perkiomen Valley and Phoenixville in the Ralph Wetzel Classic hosted by Hatboro-Horsham over the winter break.

“That’s a good thing,” Hennelly said. “Wrestling all day, coming home late at night and having to get up for the next day … it builds mental toughness.”

NOTES >> The night’s activities were kicked off by wrestling between the communities’ youth and middle school teams. … A moment of silence was observed prior to the varsity match to honor the memory of Cy Driver, a ninth-grader who died earlier in the month. Driver had been a member of his school’s football and wrestling teams. As part of the observance, Pottsgrove wrestlers and coaches wore T-shirts with Driver’s initials on the back, along with a pair of wings. … Pottsgrove retained possession of the Border Battle team trophy a fourth straight year.