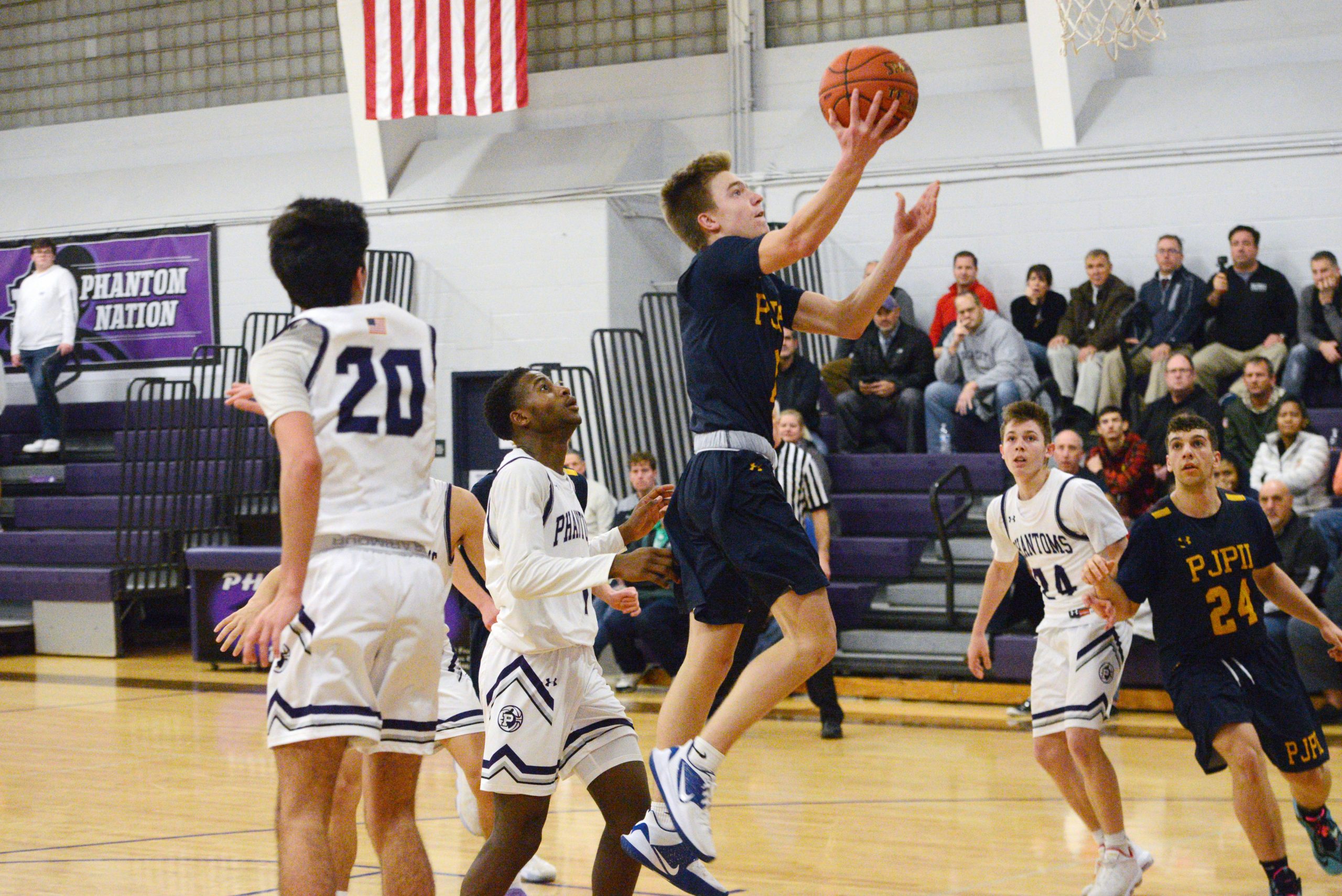 PHOENIXVILLE >> Pope John Paul II sophomore Jaden Workman began the Golden Panthers’ game against Phoenixville on the bench, but in a tie game late the young guard had the ball in his hands with the clock winding down.

Workman waited until the clock went under 10 before using an in-and-out move with his left, getting into the lane, taking a bump and tossing the ball up toward the rim with his right. The shot hit the rim three times before it fell in, giving the Golden Panthers a lead with 6.5 seconds left.

Justin Green’s 24 points and the clutch play of Workman (seven points) and Drew McKeon (12 points) down the stretch keyed the Golden Panthers in a 67-63 win over Phoenixville to take the early lead in the Pioneer Athletic Conference Frontier Division standings.

After two lopsided wins for the Golden Panthers in their first two Frontier games, Tuesday’s contest featuring two energetic fan bases and a packed gym gave Workman a good taste of what division play is like.

“They told me it would be a very big game,” Workman said. “There were a lot of fans here. It was very exciting.”

“At the end of the game, I just knew I could get by my defender, and I tried going into the defender and drawing a foul,” he added.

.@PJPII_Hoops Drew McKeon and Jaden Workman led the way down the stretch as PJP picked up a big Frontier win over Phoenixville on Tuesday. pic.twitter.com/xSjiKJbZko

PJP rolled to wins over Upper Perkiomen and Pottsgrove in its first two league games before a three-point loss to Spring-Ford on Saturday. The Phantoms knocked off division foes Upper Merion and Pottstown in their first two Frontier games, both decided by fewer than six points.

Phoenixville, which missed the league playoffs with a loss to Pottsgrove on the last day of the regular season in 2018-19, looked on its way to becoming the early division front runner Tuesday, building a 59-42 lead after three quarters. Senior guard Steven Hamilton scored 14 of his team-high 20 points in the quarter, which included drilling a buzzer beater three to end the period. Will Allain, who finished with 12 points, added five in the quarter.

“Our third quarter starts, they have been slow, but we knew this game was a big game for us,” Hamilton said. “We had to turn it up and let them know we’re here, set the tone.”

The Golden Panthers started the fourth on a 7-0 run and pulled with one-possession, 59-57, with 4:23 remaining on a three by McKeon. Kade Breisblatt responded with a triple for Phoenixville, but a drive by Workman and two free throws from Green pulled PJP with one possession again, 63-61, with 2:37 left.

McKeon, who hit a game-winning overtime 3-pointer at Phoenixville late last season, tied the game with a little more than a minute left on a putback. After a defensive stop, Workman’s drive put PJP ahead for the first time since the first quarter. On Phoenixville’s ensuing inbound play, the Golden Panthers forced a turnover with 4.4 seconds to go, and McKeon sealed the victory with two free throws.

“We just knew it was going to be a dog fight coming in here,” McKeon said. “Phoenixville is a great team. They did a heckuva job covering us on defense. At the end of the game, I kind of thought about (last year’s shot) a little bit, but at the end of the day I just wanted to get it done.”

Green and McKeon, both All-Frontier players last season, are the only returners from PJP’s rotation who saw extended minutes. Others like Luke McCarthy (9), David Smrek (8), Kevin Green (7) and Workman have helped give the Golden Panthers balance like last season, but the junior Green and senior McKeon will likely have to shoulder this team at times like they did Tuesday.

Green scored just two points in the first half but got going with 13 in third, as he and Hamilton traded baskets, and nine more in the fourth as PJP climbed back into the game. McKeon scored six of his 12 points in the final five minutes of play.

“I think Justin and Drew are guys that are going to have big runs for us, and are going to be able to score points,” PJP coach Brendan Stanton said. “But I was just really more impressed with their positivity and leadership when things really weren’t going well tonight. That’s what it really came down to. We never thought we were out of it, even when we were down 14 going into the fourth.”

Phoenixville fell behind 11-5 in the first quarter before Hamilton blocked Green on the fastbreak and got the Phantoms’ student section involved in the game, sparking a 9-0 run as the two teams ended the first tied, 14-14.

Sophomore Chris Weiah was the early standout for Phoenixville, scoring six of his 13 points in the first quarter. Six different Phantoms helped Phoenixville start out the second quarter on a 12-2 run, and Mike Memmo knocked down two shots late to give Phoenixville a 32-23 halftime lead.

After holding PJP to 23 points at halftime, the Phantoms’ defense slipped in the second half, allowing 19 points in third and 25 points in the fourth

“It was definitely an energy giver, and then we got a couple charges,” Hamilton said of his block. “Our defense was crazy in the first half. We just gotta do it in the second half, the whole game.”

Five of the six Frontier division teams finished within two games of first place last season — PJP at 7-3, Pottsgrove and Pottstown at 6-4, and Upper Merion and Phoenixville at 5-5 — making for tight contests and a tight playoff race up until the final day of the regular season.

The early results show not much separates these teams once again with Phoenixville already having played three contests within six points.

“That’s all our games,” Hamilton said. “They’re all going to be pretty close, but we just gotta keep doing our job. Tonight’s game is just a minor setback for a major comeback.”

“We know we have a target on our back, everyone’s coming for us,” McKeon said. “But we think we got a lot better this offseason, and we’re ready for the challenge.”