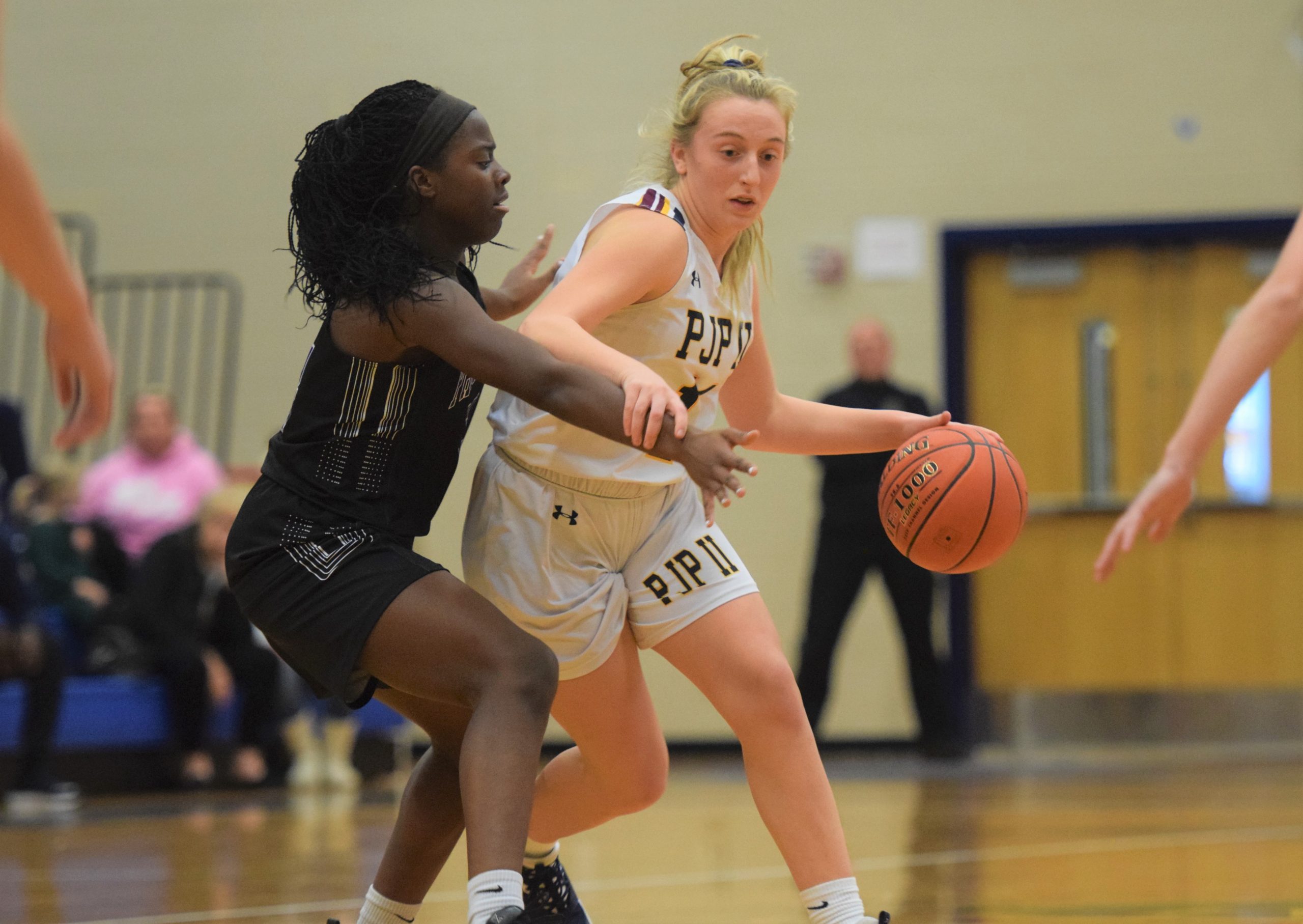 The Pope John Paul II girls basketball team may want to forget its third quarter against Phoenixville Tuesday night. The Golden Panthers’ fourth quarter will make that much easier to do. That’s a memory worth saving.

Pope John Paul II rallied from six points down in the final 2:53 by making all the key plays down the stretch to earn a 34-33 Pioneer Athletic Conference Frontier Division victory on their home floor, the Phantoms first loss of the season.

Sophomore guard Tess Crossan scored eight of her game-high 15 points in the final frame, including an and-one putback with 5:36 to go that got PJP out of a funk that had it trailing 24-17 despite leading 15-10 at halftime.

“I think that was huge,” said second-year PJP coach TJ Lonergan. “That got us over the top and it showed us that we need to match their intensity. That allowed us to turn the tide.”

PJP, which reached the PAC semifinals and PIAA Class 5A tournament in a 16-13 season a year ago, has taken some early obstacles in stride: standout junior forward Kallan Bustynowicz is nursing a long-term injury of a torn meniscus while another projected starter, senior Mary Kate Shannon, was also out Tuesday.

With that background and a 1-2 start, the win over upstart Phoenixville will be all the more pleasing.

“It’s a group that is still trying to find themselves,” Lonergan said. “We have a couple injuries, sickness, so we’re still trying to get the hang of it. People are being put in positions that they weren’t expected to be in initially.

“At times we probably looked like zombies and they agreed with that in the locker room. But they finally picked it up in the fourth. That’s what we can look like if we just put on that other gear. I think we’re still finding it and hopefully can start putting several quarters of that together.”

Phoenixville, under first-year head coach Brian Grashof, had its own share of positives and negatives to sift through after enduring a one-point first quarter but rallied to build a seven-point fourth quarter lead while playing without its top returning scorer Aubrie Breisblatt (ankle).

“We had them, we’ve just gotta finish,” said Grashof. “We’ve gotta learn how to win. We’re a young team and we need to learn how to finish games.”

Grashof, formerly the head boys’ coach at Kennett, has been very pleased with the effort of the Phantoms.

“They play so hard,” Grashof said. “We have to outplay teams to win. We play extremely hard on defense and they play well together. That’s been the key so far.”

Phoenixville managed to stay within striking distance in the first half to trail 15-10. The Phantoms outscored the Panthers 8-2 in third quarter and locked PJP down defensively. It took its first lead, 16-15, on a steal and layup by Sammy Brown (5 points) with 2:31 left in the quarter.

Phoenixville started the fourth 6-for-6 at the free-throw line (two each for Brown, Williams and Green) to open a 24-17 lead.

“Phoenixville and Brian, in his first year, they’re doing a great job,” Lonergan said. “They have a lot of energy. Their energy and defensive pressure really took us out of our comfort zone. Instead of attacking that, we fell back on our heels, until the fourth when we matched their aggression and pace.”

Crossan’s putback from a Kayla Ciuba free throw got PJP going in the right direction. It made its final charge from down 30-26 with a pair of Crossan free throws, an and-one driving layup from Kennedy with 1:15 to go and took the lead for good on Haley Jackson’s 2-for-2 trip to the line with 56 seconds left.

Viney’s steal and free throws gave PJP a 33-30 lead with 44.2 remaining. The squads traded 1-for-2 trips to the line and Jamie Michaud scored a long jumper for Phoenixville to get within one in the last seconds but couldn’t foul to extend the game.