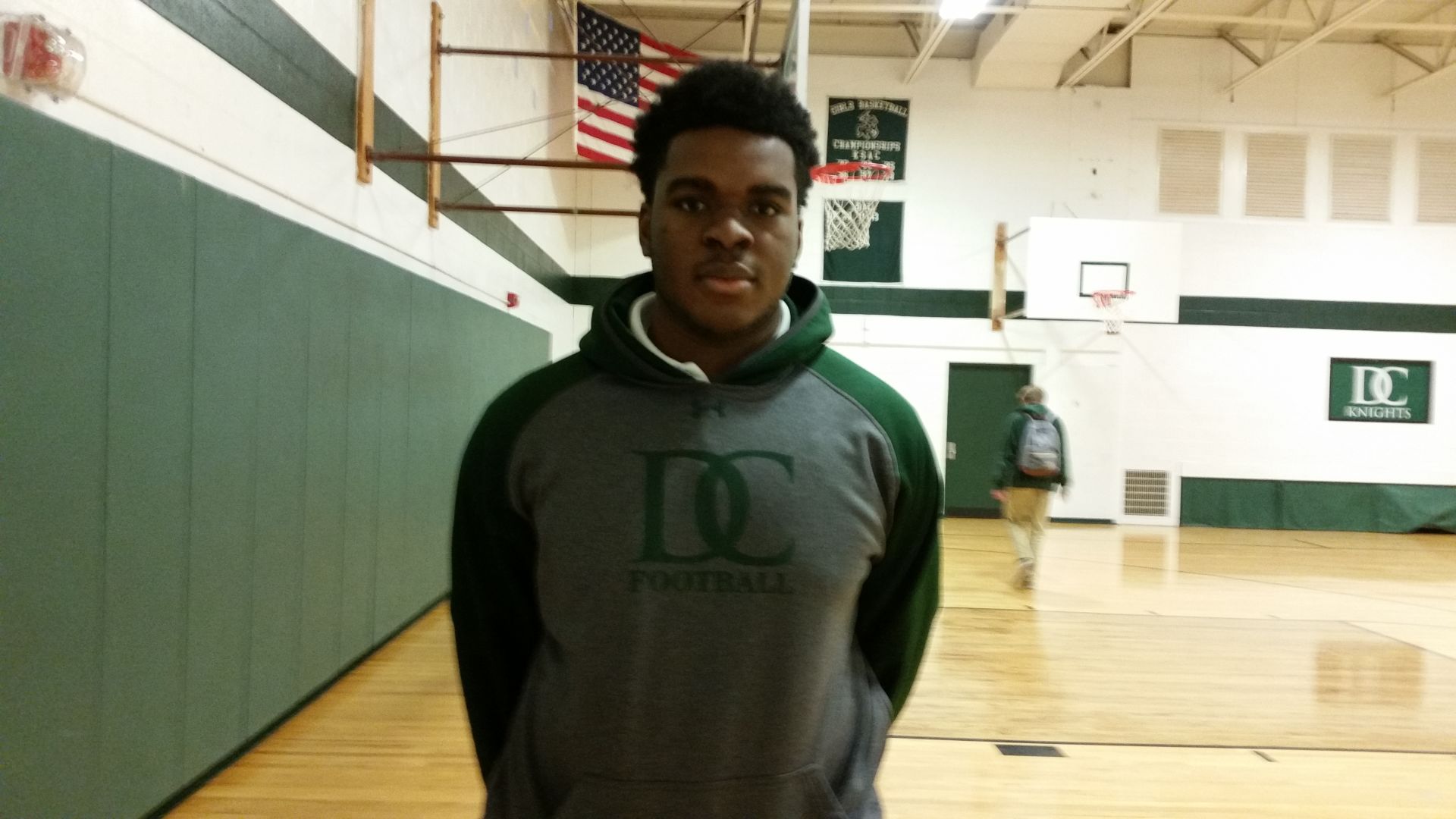 When two-way lineman Obinna Nwobodo signs with Villanova Wednesday, he will be the first player in the history of the football program at Delco Christian to receive a Division I scholarship.

He wasn’t exactly sold on the idea of playing 8-man football, which is what the Knights elected to do last spring after suspending the program just before the start of the 2018 season for a lack of available players.

“It wasn’t a traditional way of football and so I thought maybe that would hinder my recruitment,” Nwobodo said.

Nwobodo looked at the Salisbury School, an all-boys prep school in Connecticut, and area schools like Episcopal Academy.

Something, though, told Nwobodo to stay, which he did.

“To this day, I honestly don’t know why I stayed,” Nwobodo said. “I think God instilled something in me that I should stay here, and ultimately it worked out.”

It sure did. When Nwobodo puts his signature on a national letter of intent with Villanova Wednesday, the 6-3, 280-pound senior will be the first player in the history of the program, which began at the varsity level in 2011, to play football at the Division I level.

“It means a whole lot,” Nwobodo said. “I’ve prided myself on being the first to do things in life, so this is one of those checkoffs on my bucket list, to be the first football athlete to go D-I. I’m creating a way for others and hopefully there are more to come after this.”

Nwobodo is one of 14 players the Wildcats are expected to sign during the first day of the three-day early signing period for football, according to internet and social media reports.

Heading the Class of 2024 are Coatesville quarterback Ricky Ortega and Raiders wide receiver Dapree Bryant, and tight end Mitchell Bothwell (All Saints Episcopal School in Texas). All three are rated as three-star recruits by 247sports.com.

Ortega, Bryant and Rothwell are all three-star recruits, according to 247sports.com.

Ortega finished his career with 10,200 passing yards, third most in Pennsylvania history, according to a story in the Daily Local News. He threw 129 touchdown passes, second in state history, against just 19 interceptions. He was the first quarterback in PA history to pass for 2,000 yards in four consecutive seasons. He also ran for 2,993 yards and 45 scores. He also caught two touchdown passes.

Bryant set Ches-Mont League records for receptions (194), receiving yards (3,708) and receiving touchdowns (54). He also ran for 826 yards and 12 scores. The pair combined to lead the Red Raiders to a 47-8 record and three District 1 Class 6A championships.

“I’ve been talking to (offensive line coach Sean Devine) since my sophomore year,” said Nwobodo, who also is the starting center on the boys basketball team. “The difference between Villanova and the other schools was that they were truly vested in me as a football player and as a student. They told me to be on top of my grades. (Devine) would always check up on me and ask me how I was doing, not just in football, but as a student-athlete. So the investment that they showed impacted my decision.”

While he was recruited by Devine, Nwobodo is expected to play defensive end for the Wildcats. How much he or any of the other recruits play as freshmen remains to be seen. The Wildcats have 20 starters back from a team that went 9-4 and fell to Southeastern Louisiana, 45-44, in the first round of the FCS playoffs. Villanova is expected to be one of the top-ranked teams in the country next season.

Nwobodo, who plans to major in finance and business, doesn’t care where he plays. He’s just grateful for the opportunity.

“We’ll see what they do with me when I get there,” he said.