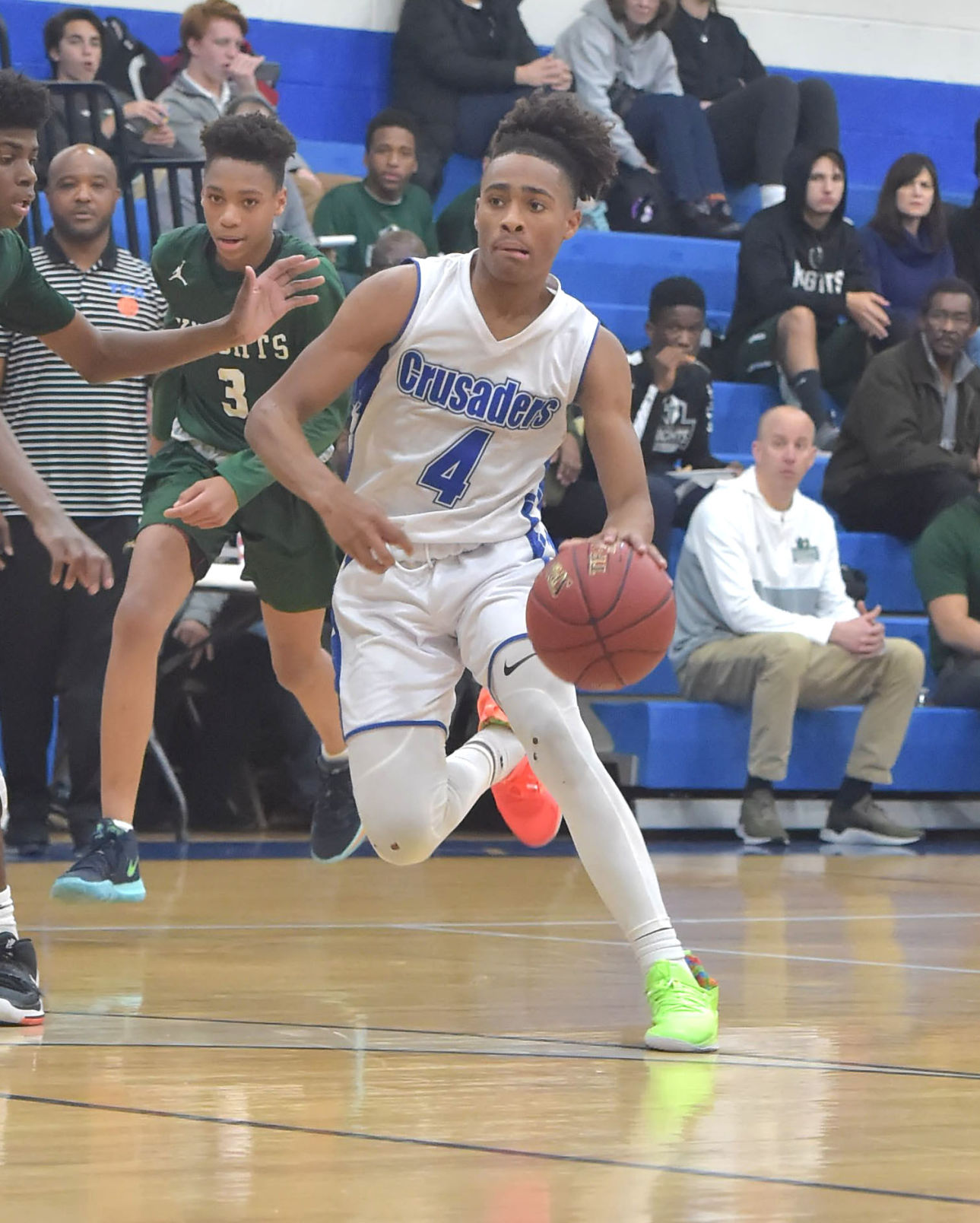 BROOKHAVEN – In a lot of aspects of the game, the Christian Academy did what it wanted in the first quarter Friday night.

The Crusaders bullied visiting Delco Christian on the boards. They created turnovers. They got quality shots aplenty from the field. But still the teams were deadlocked at 10 after eight minutes of play, thanks to a sluggish shooting start.

The message after that first period was to keep at it, with Grant Sareyka’s shot and Isaiah Mitchell’s defense taking the lead at each end of the floor.

It proved to be a sound plan.

Sareyka poured in a career-high 29 points, and Mitchell kept the defensive intensity high with a double-double to lead TCA to a 66-55 win over their Bicentennial League rivals.

Christian Academy’s Grant Sareyka goes in for a layup against Delco Christian Friday. Sarekya scored a career-high 29 points to lead the Crusaders to a 66-55 victory over the Knights. (Pete Bannan/MediaNews Group)

“It’s pretty tough not to get frustrated,” Mitchell said of the ghastly 5-for-23 shooting performance in the first quarter. “But for us, we’re a defensive team. We just try to keep playing defense, keep getting out on the break. It doesn’t matter how many shots we miss. Just keep playing defense. That’s our motto.”

But the latter figure, the six steals, was most impressive. Delco Christian turned the ball over 22 times (compared to 18 for TCA in a generally error-strewn affair). Mitchell, a former defensive back for the Darby Township Eagles football program, channeled his ability to backpedal and read a passer’s eyes to constantly put himself in position to pilfer.

The defense gave TCA’s offense time to rouse itself, and Sareyka stepped up most prominently. He had 19 points in the middle two quarters, helping TCA lead by seven at the break, 25-18. When Delco Christian (2-2, 1-1) surged in the third, hitting TCA with a 10-2 run to briefly take the lead, Sareyka had the answer. He shook off a 1-for-7 contribution to that frigid first quarter and exploited soft spots in Delco Christian’s zone defense with his speed and range.

“I learned pretty quick where the spots were going to be,” Sareyka said. “I just needed to get my mind right to hit my shots, because I came out and missed my first three. I had to keep shooting, find my shot, find my rhythm, and once I got it, I was good.”

His answers on the court were often emphatic. A corner 3-pointer from Earle Greer gave Delco Christian the lead, 28-27, at 5:05 of the third. The teams traded baskets, and when Joshua Parks splashed home a triple to tie the game at 35, Sareyka answered with a pull-up 3-pointer to put TCA back up for good at 38-35.

“He’s the best shooter on our team,” Mitchell said. “We try to get him open looks knowing he can knock it down.”

Sareyka hit TCA’s only three 3-pointers on a night where the Crusaders were 3-for-17 from distance. They fared better at the line with a 19-for-23 performance, led by Sareyka going 8-for-8 in the final quarter to ice the win. He added five rebounds, three assists and three steals.

Sareyka was also key to TCA’s defense. The plan was to run double teams at Jackson Piotrowski every time the DC senior touched the ball, a plan reinforced by the Knights missing starting forward and secondary scoring threat Obinna Nwobodo.

The 6-5 Piotrowski had his moments passing out of double-teams with a team-high five assists, plus five rebounds and three blocks. But strong as his floor game was, he fouled out with 2:11 to play having scored just seven points and attempted only five field goals and not one 3-pointer, nowhere near enough offense for the circumstances.

“We have to get him the ball no matter what,” DC forward Jordan Mitchell said. “And not that we’re trying to force it to him, but if we run our offense enough and run it through our best player, set off-ball screens to get him the ball, it’s going to be easier for us to win because he can attract so much attention, get the ball and then pass it to one of us.”

You wouldn’t know it was a team playing its third game of the week. Or maybe you would know it from the bounce in their step as they closed in on their fourth straight win.

“It’s great, playing three games, as a basketball player,” Isaiah Mitchell said. “You want to play games. You don’t look forward to practice as much; you look forward to games. The intensity after the first two games, we had blowouts, but coming into this game, we wanted to step it up, beat our rival and play to our hardest.”