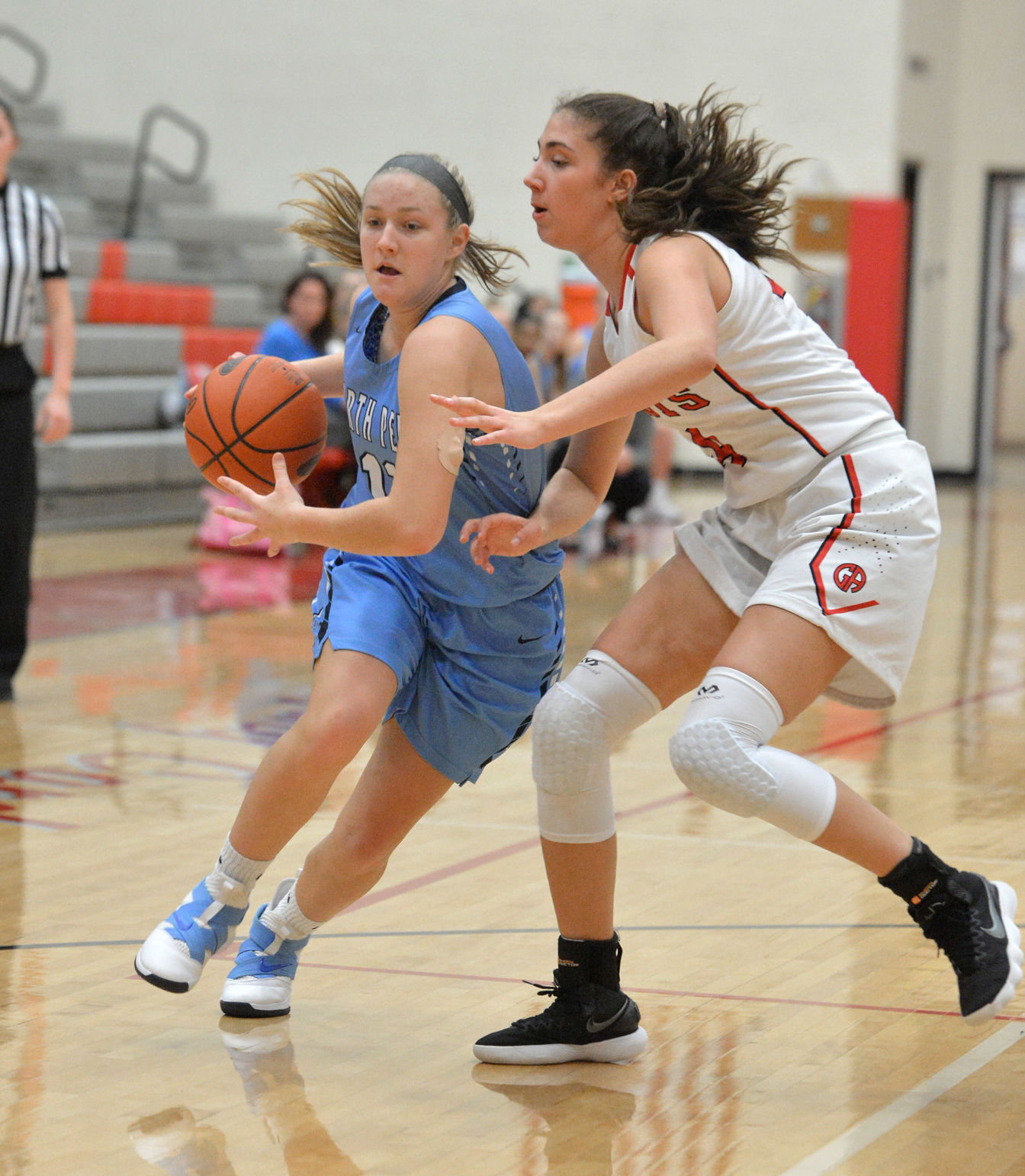 TOWAMENCIN >> Jen Carangi had a big reason to be happy at halftime but a few reasons more not to be.

The second year coach of the North Penn girls basketball team said in most cases, she would have been happy to hold an opposing team to 18 first half points. It was everything else about her team’s effort in the opening half that left quite a bit to be desired.

Her players got the message, got after it on defense and used some clutch scoring by Alli Lindsay late to rally past Souderton 46-38 Thursday night.

“I told them at halftime if you had told me we’d only give up 18 points, I would have thought I’d be real happy but we just came out and played so flat in the first half,” Carangi said. “It’s a credit to Souderton, Lynn (Carroll) does such a great job of getting those girls ready. They’re young, but they’re going to play the right way.”

North Penn (3-1, 1-0 SOL Continental) never led in the first half and the Knights just didn’t seem to have a lot of fire. They left layups short, didn’t rebound great, fouled a lot and didn’t put a lot of pressure on Souderton (2-2, 0-1 SOL Continental) defensively.

Souderton went on a 6-0 run to start the second quarter and closed the half with four straight points by freshman Casey Harter. Harter’s closing spree was crucial, giving the Indians an 18-13 halftime lead after the Knights had closed within a single point.

At the half, the Knights had to decide where they wanted the game to go.

“We all knew we needed this win,” Lindsay said. “It was our first league game, we wanted to start off strong but in the first half a lot of us were a little slow. It’s our third game of the week, which is no excuse and yesterday we didn’t have a proper practice so we needed to come out with that energy.”

Souderton extended its lead to 22-13 with 4:54 left in the third quarter, then things started to tilt in the Knights favor. North Penn picked up its defensive intensity and extended the length of the court with Carley Adams leading the effort pressuring the ball end to end.

The effects didn’t register immediately but after Jordan Zimmerman hit a three to put Souderton up 25-16, North Penn went on a run. It wasn’t one player taking over on offense, but the defense that keyed the spree as the Indians started to turn the ball over.

Souderton, which had committed just six turnovers in the first half, would finish with 19 turnovers.

“North Penn did a very good job causing chaos but you’re also not going to win too many games with 19 turnovers,” Carroll said. “The fact it was one possession with under a minute and had 19 turnovers on the game, we’re doing a lot of stuff well but we have to keep working at ways to take care of the ball and have a little bit more composure.”

Lindsay noted her team is the one playing mostly seniors and juniors while Souderton had a lot of youth on the floor. Still, the Knights got out-worked in the first half and they weren’t happy with their effort. On top of wanting to win their conference opener, Lindsay said the Knights wanted to play better for Carangi for all the support and encouragement she’s given them.

Valerie McGriff hit a 3-pointer with 1:45 left in the third to give North Penn its first lead of the game. Erin Bohmueller, one of those Souderton freshman, hit a three in response but the Knights’ Imani Plaza connected from deep in the last minute of the third to send the home side into the final frame 29-28.

Plaza was part of a terrific effort by the Knights’ bench. With a lot of players in foul trouble and the inherent nature of playing full-court defense, North Penn will need that unit to be strong all season.

“We have to play more people so it’s been great,” Carangi said. “Rachel Dunn (seven points, seven rebounds) in particular has been giving us huge minutes. She’s one when everyone else isn’t making foul shots, she’s making them. That’s been one big positive, the bench.”

Lindsay split a pair of foul shots to start the final quarter, added a pair of tough driving layups and assisted a bucket by Adams to put North Penn up 38-33.

A huge three by Zimmerman, who led the Indians with 11 points, cut the lead to 41-38 with 46.9 left. Souderton even forced a turnover with 45 seconds left under the basket but then committed a foul on the inbound to give it back to the Knights.

“We played pretty well most of the game, they hit a couple big shots in the third quarter, but we’re working on it and we’re going to learn a lot from this game,” Carroll said. “We assumed there would be ups and downs in the month of December. We’re not going to use youth and inexperience as an excuse much longer but we do truly have to experience these things and then not let them happen again.”

Lindsay knocked down a pair of freebies with 44 seconds left to essentially ice the game and improve the Knights to 3-1, which is just where Carangi wanted them to be. McGriff led the Knights with 10 while Lindsay finished with nine in a pretty balanced effort across the board.

After a district playoff appearance last year, Carangi believes in the ability of her team but noted the Knights can’t expect to hand teams a lead and come back like they did Thursday. To her, there’s no question the players will work hard, they just have to make it easier on themselves.

“Us together, the experience we have and the seniors and juniors, we have a lot of girls who know how to play basketball,” Lindsay said. “Our IQ on the court helps us a lot and working together, we’ve been hustling and working since the summer, we know this is our year, we’re focused on going far and we’re just working as hard as we possibly can.”