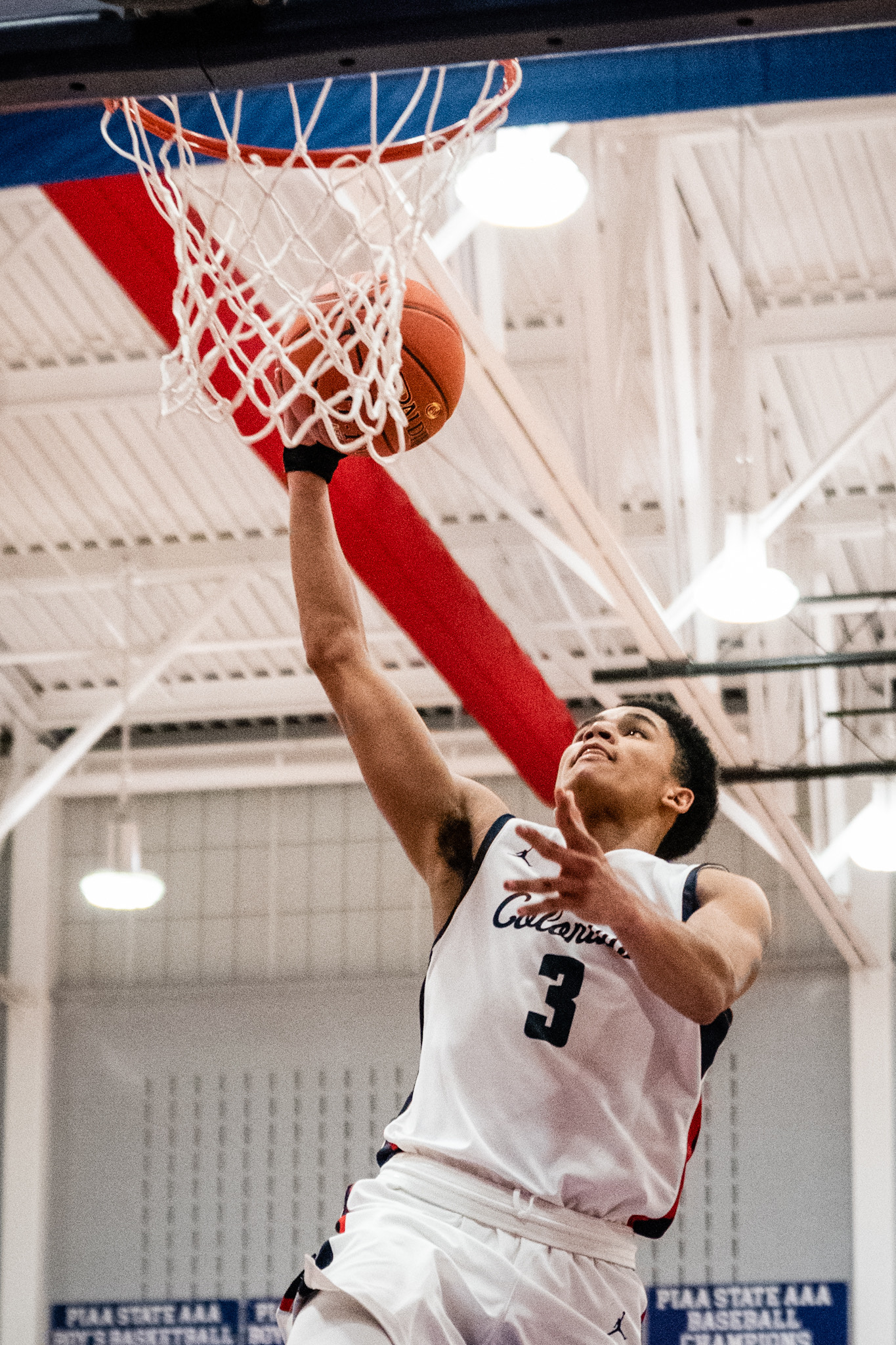 Then, on the first day of the season, he collided with a teammate and injured his right thumb. The lefty is wearing a protective wrapping and, after a couple losses to start the season against Lincoln and Simon Gratz, feels like he is starting to get used to it.

Peters led the Colonials to their first win of the season, a 77-49 Suburban One League American Conference victory over rival Wissahickon, at Plymouth Whitemarsh High School Friday night.

“After talking to my coaches, coach D and my father,” Peters said, “we just realized that, especially with the thumb thing going on, I was focusing too much on it. I just have to relax and play the game that I love to play. That’s the mindset I had tonight.

“With the thumb thing I wasn’t going right as much (in the first two games). You can’t think about it. You have to just go out there and play your game. That’s what I’m trying to do more in practice — go right more, continue to play how I was playing before the season started. The confidence is on the way back up. I’m not expecting to have any more bad games like that in the future.”

“He has braces on (his thumb) and tape on it,” Donofrio said. “It can mess with your head a little bit. He had to be reminded — you do know you’re good, right? I think even when you’re a returning starter, when you become the focal point, when you become the guy — you have to get experience with that element, too. It’s nice to see that’s how it was tonight.”

Peters made an impact from the jump against the Trojans. He had eight points, six rebounds and two assists in the first quarter to help PW build a 21-9 lead that wouldn’t be threatened the rest of the game.

He showed off a full arsenal of offensive skills. He hit five three-pointers — a few catch-and-shoot, a pull-up and a step-back — and finished in a variety of ways at the rim, including an emphatic slam in the fourth quarter to put the exclamation point on the SOL American opener.

On the defensive end, Peters used his energy and 6-foot-2 frame to harass Wissahickon ball-handlers all night. The Trojans turned the ball over 20 times.

Peters is the most experienced player on the Colonials roster after being a starter his entire junior year. He was supposed to share the point guard responsibilities with Anthony Straface, but when the 2019 graduate was in and out of the lineup due to injuries, Peters shouldered all the responsibilities. That helped prepare him for being the team’s leader as a senior.

“I’m just making sure as a team we’re working hard every day,” Peters said. “We have a really great group of guys. Everyone likes to listen. When we mess up we have each other’s back. We’re always trying to be positive — maybe too positive sometimes, need to clamp down on the mistakes. We always listen to coach and try to get the guys to be together and I think we’ve done that in the early going. We’re together and we’re definitely going to stay together. There’s no team conflict or anything. Everybody loves each other and we’re going to continue to get better.”

The Colonials (1-2, 1-0 SOL American) started the game with a 7-0 run and, after Wissahickon cut its deficit to 13-9, closed the fourth quarter with eight straight to go ahead, 21-9. They maintained a 12-point lead into halftime, 35-23, before pulling away in the fourth quarter. DiCianno scored 13 points in the third as the PW lead ballooned to 25, 58-33.

“I give credit to my guys they played hard,” he said. “Stefan Lowry has been playing well in the absence of Carmen, Twersky, and Richman, who have been out. He played four really good games coming up to this point and I thought he had a tough night. He got into foul trouble early … It was a tough time for one of our forwards to really get into foul trouble. Will Kunzier came in and even though he didn’t score a ton he gave us great minutes in there.

“I always believe the old school mentality of if you have a game of two really good point guards, the better point guard’s team is going to win. I felt it wasn’t even a close matchup. I thought Jackson (Intrieri) and Harrison (Williams) did a nice job out there at times, but (PW was) able to be more physical and to speed us up. Then on the offensive end they were able to settle and get into things better.”