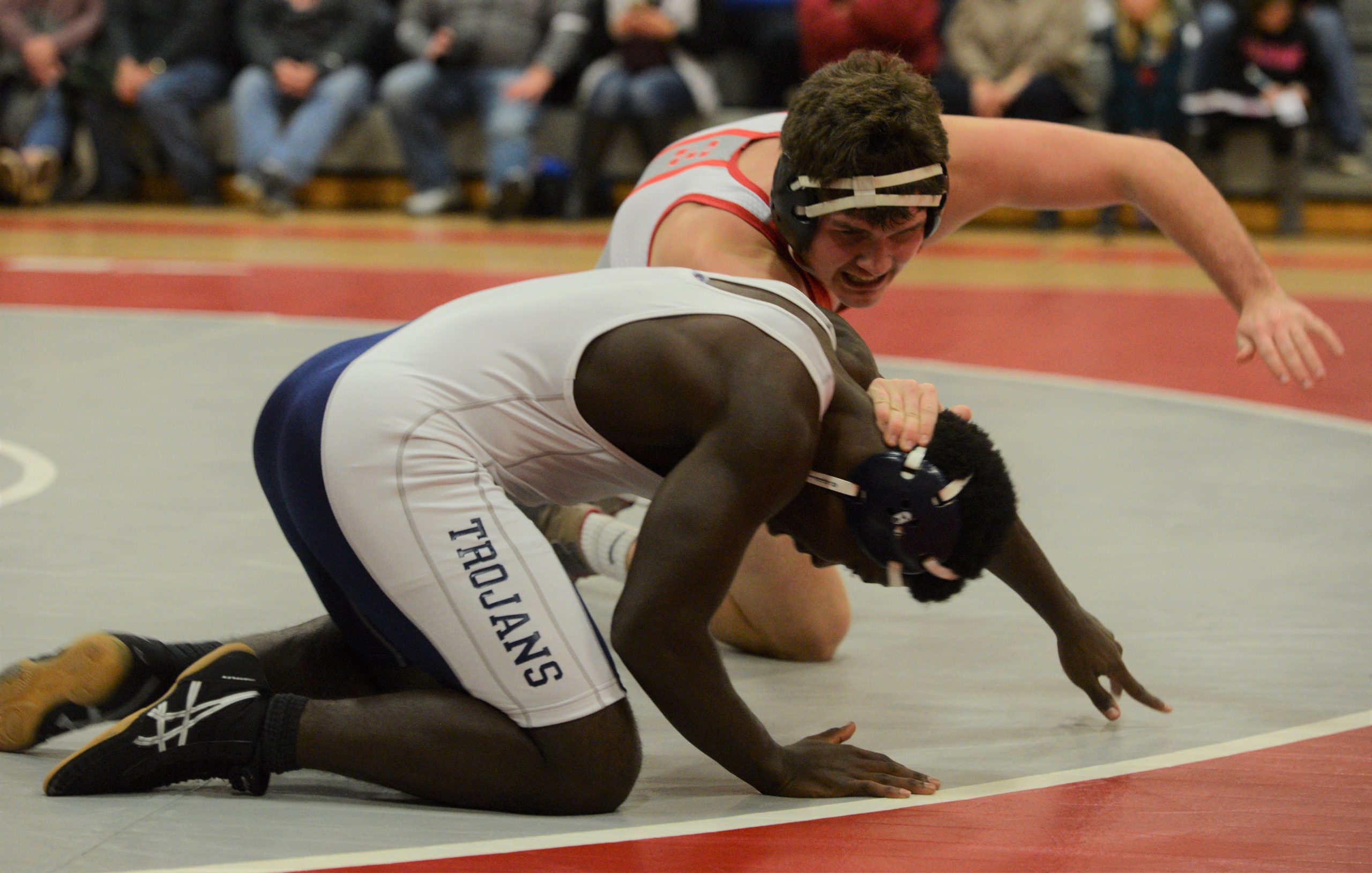 BUCKTOWN >> He’s not the same person he was one year ago.

In terms of physical condition and mental mindset, it’s a good place for Tom Dempsey to be.

Dempsey came away from the 2018-19 wrestling season determined to get in better shape. His success in that endeavor — Dempsey took approximately 25 pounds off from the 200-plus he had previously carried around — has translated into other success for the Owen J. Roberts senior.

In the wake of a 22-21 run his junior year, Dempsey is off to a 5-1 start for the Wildcats this season. His current condition was on display Wednesday as the Wildcats hosted Pottstown in a Pioneer Athletic Conference divisional crossover match dubbed “Takedown for Cancer.”

Dempsey fought for a 7-1 victory over the Trojans’ Josiah Wiggins in their 182-pound tussle. The win continued a Roberts roll that saw it rack up 73 unanswered points on the way to a 73-3 verdict.

“At the end of last year, I wouldn’t have been able to be standing in a match like that,” he said. “I’ve worked harder in practice.”

His head coach, Steve DeRafelo, was impressed in the difference.

“For his own health and how he feels,” DeRafelo said, “Tommy did a great job over the summer.”

For Dempsey, there was no complicated approach to the “new him.”

“It was a combination of diet and getting to the gym,” he said. “I got my body in shape.”

As for the mental aspects …

“It was a good lifestyle option,” DeRafelo added. “He’s a lot more level-headed this year … his maturity, how he approaches the sport. He’s more comfortable with the things that work for him. He’s settled down and is wrestling positions in which he’s comfortable.”

Owen J’s comfort zone against Pottstown (1-3) was bolstered by seven pins and two technical falls around three forfeits. Rich Nathan started off the pin parade in the 285-pound opener with an 18-second drop, and Francis McCoy capped it at 195 by getting the slap two seconds before the end of the first period.

Pottstown averted the shutout in gritty fashion, Zack Griffin pulling out an 11-10 win at 220. The Trojan senior (4-0) overcame an early 7-4 deficit at the hands of Jaden Viti, working back for a 9-9 tie after two and scoring a third-period takedown after Viti escaped off a bottom start.

The win made Griffin his team’s Outstanding Wrestler for the match.

“Griffin’s bumped up in weight,” Pottstown head coach Nick Wade said. “He lost two tough matches at districts last year, so it was nice for him to win on a large stage in front of a big crowd.”

David Forrest claimed OW honors for Roberts (6-0) with a third-period pin over Demond Thompson at 132. That staked OJR to a 35-point lead before Bryce Schmoyer scored a fall at 138, with the team victory secured when Connor Leister drew a forfeit at 145.

As part of the Takedown for Cancer, a moment of silence was observed following the playing of the National Anthem to honor the memory of OJR student Khadeem Lewis.

DeRafelo cited a special feeling for the observance.

“He was one of my students … a special young man,” DeRafelo said of Lewis, a victim of brain cancer. “Out here, we have our battles and they end, but the battles never end for people like him.

“This is special, what it stands for.”

NOTES >> The final result notwithstanding, Wade expressed satisfaction with Pottstown’s performance. “Overall, we ask them to show intensity and effort. From that measure, we see good.” … Wade confirmed next weekend’s “Border Battle” match with neighboring rival Pottsgrove, in a departure from recent outings, will not be staged at the Sunnybrook Ballroom. The Falcons will host the match in their gym instead. … Wednesday’s match was delayed with the high school building’s fire alarm sounding. The gym was evacuated for approximately 10 minutes before wrestlers and fans were able to go back inside.