All-Delco Football: In all phases, Trey Blair was Haverford’s star 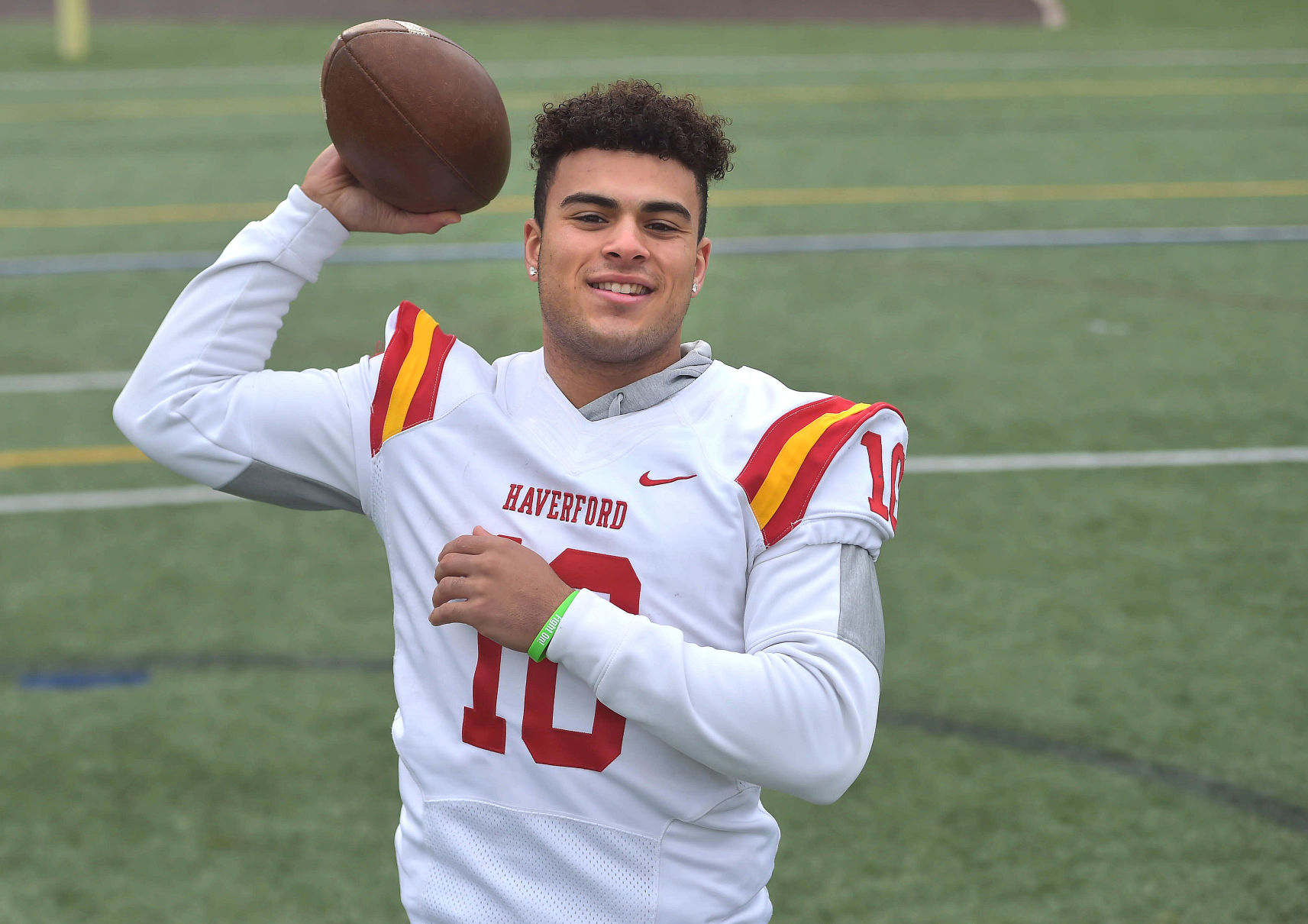 HAVERFORD — Trey Blair was feeling a bit nostalgic as he walked onto A.G. Cornog Field.

“It’s starting to hit me now, like it did on Thanksgiving,” Blair said. “Hard to believe it’s over…”

Blair will transition to college football soon — he was set to enroll in the University of Buffalo in January, to which he had committed before his senior season, but just Thursday evening decided to reopen his recruitment.

There just was no stopping Trey Blair this season — at quarterback, through the air or on the ground, in the return game, in the defensive backfield — as Upper Darby found out on Thanksgiving. His contributions brought Haverford its first district playoff win. (Eric Hartline/For MediaNews Group)

In 2019, Blair became the starting quarterback at Haverford, a position he hadn’t played since freshman year. All he did was shatter the school record for most rushing yards in a career, while leading Delco with 2,154 yards and 27 touchdowns. He ran for nearly 800 more yards than the county’s second-leading rusher, quarterback Barry Brown of Academy Park.

Blair threw for 1,160 yards and 13 touchdowns, and he was the best defensive back in the county, even though he hardly saw any action because quarterbacks didn’t dare throw his way. Nonetheless, Blair recorded two interceptions this year (both in the postseason) and broke the school record for career interceptions with 13.

Blair returned kicks and punts for touchdowns … and he could punt the ball, too.

“I got a little better at it,” he said, modestly.

Trey Blair is the 2019 Daily Times Player of the Year. This is not a surprise to anyone who saw him perform on the football field.

Even in a year dominated by amazing, dual-threat quarterbacks, Blair stood far and above the rest.

The All-Delco team is selected after consultation with local coaches.

“I went into high school playing all three sports,” he said. “I was actually on varsity for baseball, but after my freshman year, I thought that was it, I was getting a little bored with baseball. I actually tweaked my back after my sophomore football season, going into my sophomore basketball season, so that’s when I knew just to stay with football. I was worried that I would get hurt doing all three. In my sophomore season, too, I knew I had to start sending highlights to schools and making contact with coaches. I realized in my sophomore year I wanted to play college football.”

“Sophomore year, at Ridley, it was my second game starting as a varsity football players,” he said. “If I could pick one moment when I knew I could be a really good football player, I had an interception in that game with maybe a minute to go. It was a close game … and I had an interception inside our 20-yard line, so they were on their way to scoring and winning the game. That feeling I had, like I kind of saved the game, that’s kind of when I knew.”

In the final three minutes of regulation, Blair broke up a potential touchdown catch, made an interception and booted a 48-yard punt. Haverford beat Ridley, 13-9.

The Daily Times reported that night: “The Haverford High athlete sure has the makeup to be something special.”

Fast forward to senior year, Blair became the starting quarterback after the graduation of the school’s all-time passing lead, Jake Ruane. The decision to move Blair from running back/wide receiver to quarterback was logical. Coach Joe Gallagher wanted to make sure he had the ball in his hands on every snap.

And yet, the Fords started 0-2, with seven-point losses to Archbishop Carroll and Garnet Valley.

“The only way we make the playoffs is if we win out,” Blair said. “That’s what I knew we needed to do. We started slow, because we weren’t as good as the team as we would be later in the year. We had to work hard every day to become a better team. Everyone did their jobs and stuck together.”

The Fords won 11 of their final 12 games of the season. Blair led them to their first District 1 playoff victory, a 49-14 trouncing of Spring-Ford. That night Blair ran for 309 and four touchdowns. He blocked a field goal on special teams and made an interception.

Blair and the Fords won a second game in the Class 6A tournament, beating Downingtown East, and advanced all the way to the semifinal round. Haverford nearly overcame a 28-point halftime deficit at top-seeded Downingtown West but fell 49-42. Blair was not 100 percent healthy for the game — he suffered a hip pointer the previous week — but still amassed 200-plus yards on the ground and threw for two TDs.

“Nobody expected us to win, to get as far as we did,” Blair said. “It would have been great to win and play for the championship, but we made it that far together and we made history.”

Blair posted to Twitter Thursday announcing his decommitment: “I want to thank Coach (Lance) Leipold and the rest of the coaching staff for recruiting me and giving me the opportunity to play for them. After rethinking my decision I have decided it is best for me and my family to de-committ from Buffalo.”

Wherever he lands, Blair is likely to see playing time as a freshman. The Bulls had eyed him as a safety and kick returner, though he’s proven he’s got much more to his game.