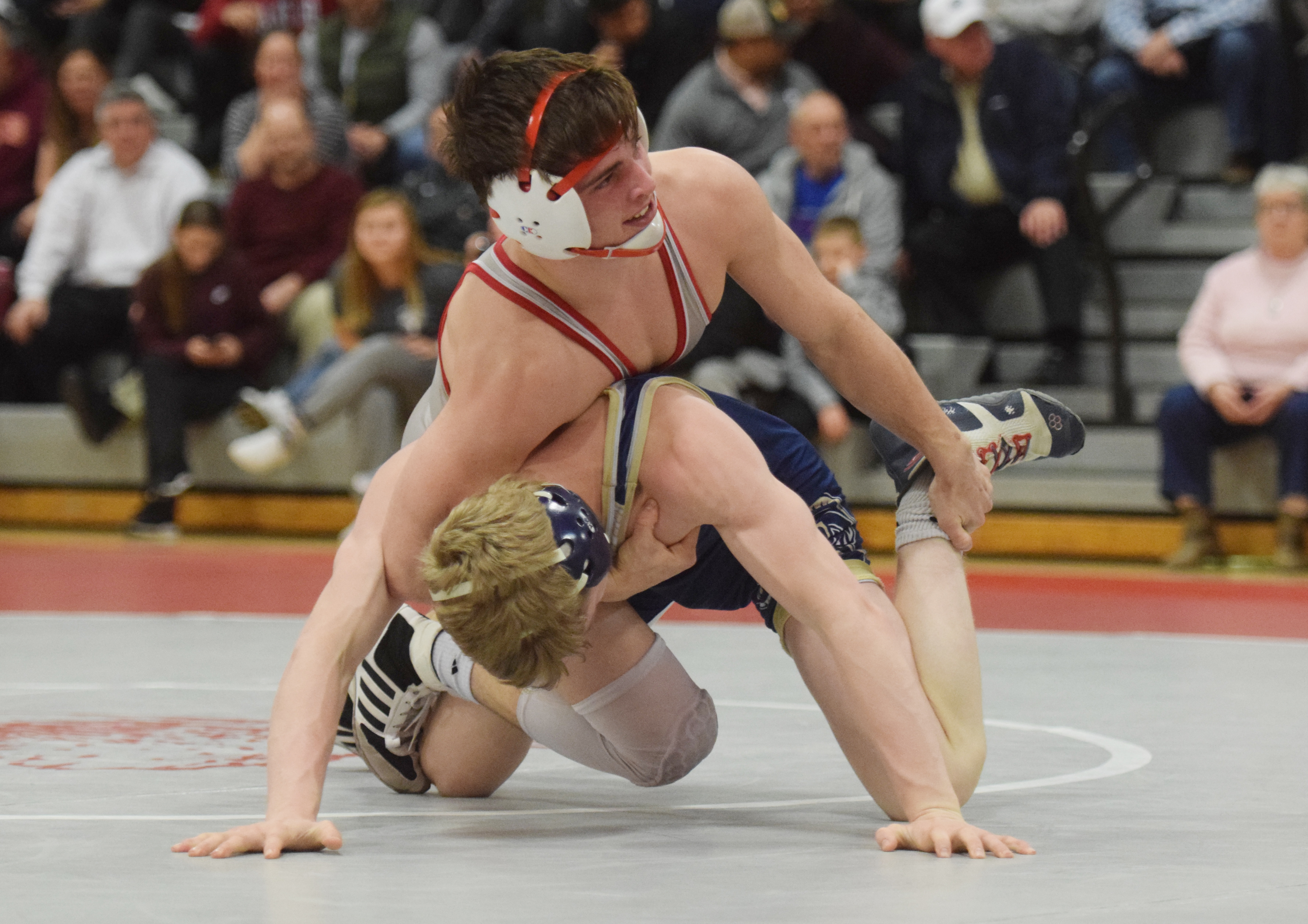 Outlook: Christine takes over the Bear program following Dave Jones stepping away from the post after two seasons. He is a graduate of the former Indian Valley High School (2011) and Lycoming College (2015) whose coaching background was as a volunteer assistant at Lycoming (2016-17) and in youth programs. … Maldonado was a medalist at states last year, placing eighth at 106 in Class AAA; Alexander, Babb and Terra were Southeast AAA Regional qualifiers. … Christine’s coaching staff includes a longtime presence in the Boyertown mat program: John Cooley, a three-year wrestler (1977-80) and a 26-year (1991-2017) assistant who was selected to the Southeast Pa. Wrestling Hall of Fame in 2017. … “I want us to have best team put out on the mat every week.” Christine said of the team’s goal for the 2019-20 season. “We want to be one percent better than yesterday,”

Outlook: The Blazers’ roster is bolstered by newcomers Kyle Bernet, Trevor McGowan, Dan Salguero — all seniors — and Brett Marchiano. … Richard posted a 27-6 record while qualifying for the PIAA Class AAA State Tournament last year. He placed fourth at 113 in the South Central AAA Regional and was a champion in the District 3-AAA (Section 1) competition. … Hogan (26-6) was also a Section 1 champ at 138, and Stehman (23-9), Canton Dolla (16-12) and Pyle (17-9) were all runners-up. … “The numbers are up in the program,” Coach Hogan said, “and we are looking to improve from last year.”

Outlook: Craig is a returning Pa. Prep state champion who compiled a 34-4 record last season. Griffin is a two-time Super 32 runner-up in middle school and a six-time New England champion. … Beckett is a Pa. Prep fourth-place finisher and National Prep qualifier who had a 35-9 record one year ago. Schmaeling topped the 30-win mark last season — a concussion kept him out of the post-season — and Daniels is a two-time National Prep qualifier. .., “We will have a much different looking team this year in both dual matches and individual tournaments,” Hoffman said. “I would argue that we have the best lightweights in the area, led by Kelvin Griffin and Jake Craig. With the growth of the team, we have also increased the strength of our schedule by adding Beast of the East, Prep Slam (Atlanta, Ga.) and Escape the Rock.

Outlook: Haley returns to oversee a Warrior program he led for two years (2002-04) and assisted for another two (2005, 2007). He spent the 11 previous winters assisting Pete Ventresca and Dave Jones at Boyertown, and he was named to the Southeast Pa. Wrestling Hall of Fame in 2017. … Haley replaces Brad Clark, who headed Methacton the past two years before stepping away this year. Clark was a freshman wrestler for the Warriors during Haley’s second season as head coach (2003-04). …  McNair was a state qualifier his junior year, off a fourth-place finish at 138 in the South East AAA Regional. … “We have a few seniors who are looking to build on last year,” Haley said. “McNair stands at 99 wins and Moser at 71 wins. Both should hit 100 wins for the year. As for the team, we look to try to be more competitive in an always-tough PAC. We will start several freshman and sophomores and look for them to improve throughout the year. Our hope is that their growth will show come February, and possibly March.”

Outlook: Tucker and Brittingham were among the Eagles’ three furthest-advancing grapplers in the 2018-19 post-season. Tucker (26-4) was a District 1-AAA North champion at 132, and Brittingham (19-11) finished second at 285.

Outlook: Petrucelli and Quinn are returning state qualifiers, Petrucelli scoring a fifth-place medal at 138 at Hershey. Dempsey and Forrest both qualified for the South East AAA Regional last year. … With 196 victories for his scholastic coaching career, DeRafelo was well within reach of the 200 milestone this winter. He achieved it during the Brian Bealer Memorial Bear Duals at Boyertown, Roberts going 5-0 and winning the championship for the first time since 2012-13. … “We are excited about the upcoming season,” DeRafelo said. “We have been working hard to prepare to compete to the best of our ability.  We have a number of kids who made great strides in the off season.  We will be looking to our seniors to provide the leadership needed to continue to grow.  We still have a lot of work to do if we hope to be competitive in the PAC, the best wrestling league in District One. The PAC is loaded top to bottom with talented coaches and outstanding wrestlers.”

Outlook: Kakos is coming off a 2018-19 season during which he compiled a 24-7 record, won the District 1-AAA North section’s 132-pound weight class and placed sixth at the South East AAA Regional. … Ricci (22-11) was 106 runner-up at North section as a freshman, going on to place sixth at the South East regional. … “We are carrying a full team with varying amounts of experience,” Dubbs said. “We look to have a strong season and be competitive within the PAC. We have some returning wrestlers that can do very well and hope to wind up in Hershey this year.”

Outlook: Meyers, Polanski and Valenteen all quaified for the South East AAA Regional tournament last season. Meyers and Polanski both placed fourth in their weight classes at the 2019 District 1-AAA North competition while Valenteen was sixth. … “Our goal is to keep improving and growing the program,” Clark said.

Outlook: Sheetz is in his first head coaching capacity after assisting his former high-school head coach, Tom Hontz, three years apiece at Upper Perkiomen and PJP. The 2007 UP graduate was a PIAA Class AAA champion during his sophomore season (2004-05) and a four-time state medalist. … Vulakh started out the season with a runner-up finish at Brandywine Heights’ Sam Lovello Classic. He was a two-time PIAA Class AA medalist the past two seasons, placing eighth at 106. … Miller went 2-2 at the Lovello Classic, finishing fifth at 120. His two victories were by pin. … “I don’t think about what I did myself,” Sheetz said of his coaching approach. “I know what it takes to get there, and that’s something from the mentality of the kids. But the sport’s evolved. I base what I do on what the kids need. You make a plan out there, and it’s under constant evolution.”

Outlook: Thompson is a returning regional qualifier, going 27-9. Griffin was another 20-win wrestler (21-12) who lost two close matches at districts. …”Our numbers are up at the high school and middle school wrestling programs,” Wade said. “We have a solid group of freshmen coming into the lineup that are ready to compete. Our experienced wrestlers will lead the way on and off the mat. We look to improve daily and keep growing the great sport of wrestling.”

Outlook: Milano, a fourth-place medalist at states, and McGill head the Rams’ list of returnees with significant post-season exposure. Tobin (sixth), Johns, Needles and Brogan all reached the South East AAA Regional Tournament. …  With 78 wins for his scholastic career, McGill is closing on the 100 mark. … “Right now we are working hard to get in shape and fill all fourteen weight classes,” Seislove said. “The PAC league this year is going to be very competitive.”

Outlook: The Indians’ roster numbers 17. … District 1-AAA North runners-up Martin, Milkowich and Rozanski were Southeast AAA Regional qualifiers alongside Carpenter and Mike Milkowich. … Rozanski comes into the season with 71 career wins. … “This team should compete for PAC Frontier title,” Adam said. “Having a full line-up this season may give Upper Perk the opportunity to qualify for the District 1 dual-match postseason.”