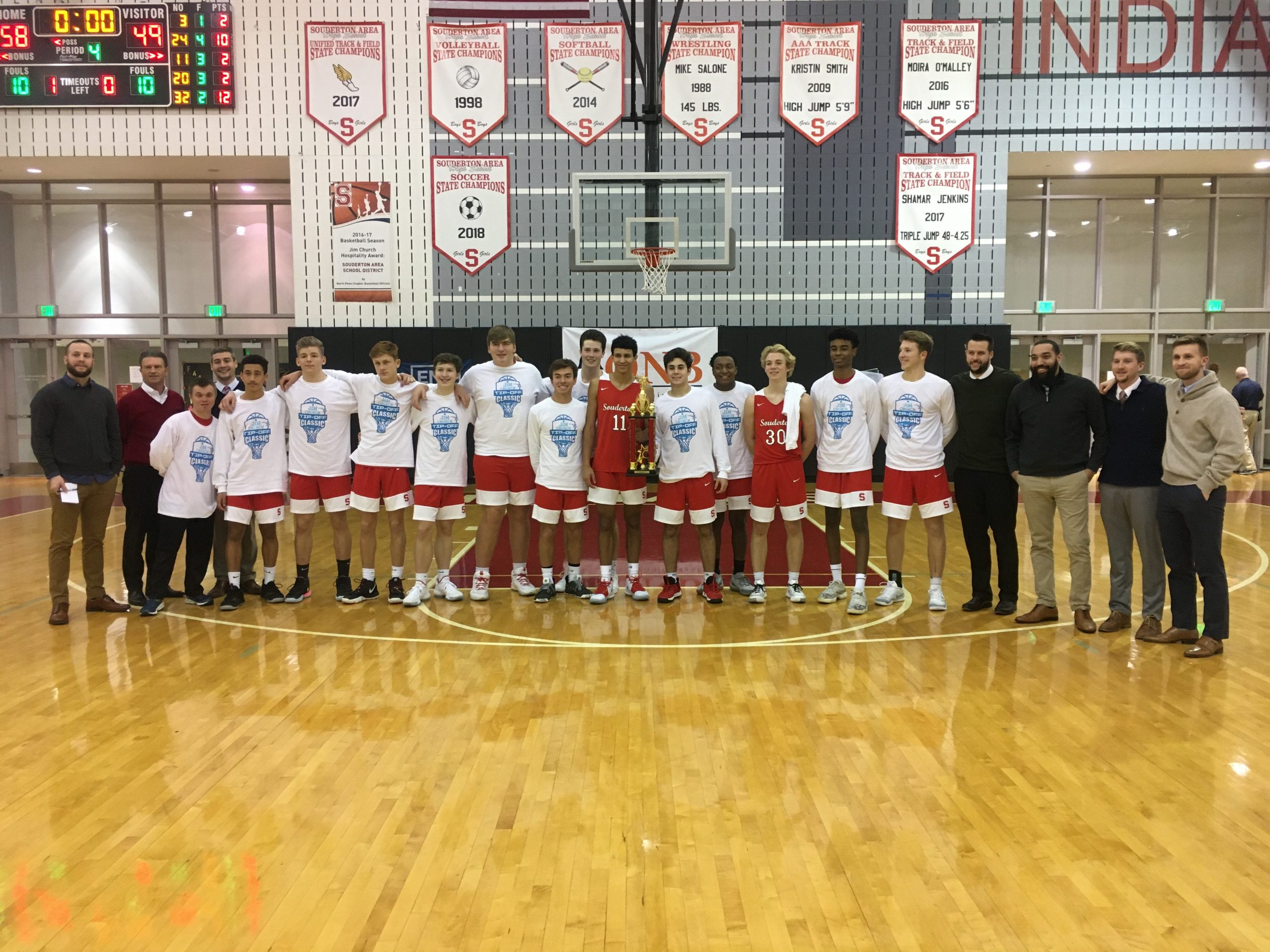 FRANCONIA >> Sometimes, it’s better for Souderton boys’ basketball coach Tim Brown to get out of the way and let Dom Natale do his thing.

Natale, a senior forward and co-captain, put on a bit of a show this weekend as he and his teammates won two very different games on their home court. For their efforts, the Indians won the Jim Church Classic and for his efforts, Natale was named the tournament’s MVP.

Souderton got a fast start Saturday and never let up, defeating Dock Mennonite 58-49 in the championship game.

“I definitely feel like the game’s slowed down,” Natale said. “I’ve been on the varsity floor three years now so I’m trying to fill that captain role and show everyone how you have to bring the intensity every play and every game.”

Natale racked up 16 points for the second straight night, was active on the boards and dished a handful of solid assists while pulling a few more Houdini moves to get out of tough spots on the floor. He ended the first quarter with a superb behind the back pass out to Jason Price in the corner for a three at the buzzer, capping an impressive start for the Indians.

Friday, Souderton had to slug out a narrow win over Lansdale Catholic with Natale and Price play the hero role late. On Saturday, against a Dock squad that had lit up the gym a day prior, the Indians wanted to put some space on the scoreboard as quickly as possible.

Of course, doing that had been an area of struggle for the Indians.

“Even the first two scrimmages we came out to slow starts so it was our emphasis tonight to come out punching,” Souderton coach Tim Brown said. “We wanted to deliver the first punch and keep punching after that, so we picked up the pace a little bit and made sure their bigs had to run so I think that helped us.”

Andrew Vince, who struggled to find a flow offensively Friday had no such trouble on Saturday. The senior, who was the football team’s quarterback, went right to work and scored eight of the first 11 points of the game. The other three came on Natale’s and-1 as the Indians rolled out to a big early lead.

It was basically a total opposite of the Pioneers’ start on Friday and one they didn’t really get a chance to recover from. Dock did answer with an 8-0 run but in what would become a theme, Souderton answered back with Vince scoring inside and Natale’s highlight pass to Price coming 17 seconds apart.

“We came out flat and that’s not the way we need to start a game, I don’t know, we didn’t get off to a good start and were playing an uphill battle the rest of the game,” Dock coach Mike Fergus said. “We’d make a run and they’d answer. We didn’t execute our gameplan at all in the first half and that was the problem.”

Brown has preached mental toughness to his team and while it showed differently than it did Friday, the Indians had it on Saturday. Dock didn’t go away just because Souderton started well and the hosts had to come up with a couple runs in the fourth quarter to keep the Pioneers at bay.

Fergus said while his team couldn’t score on Souderton’s defense in the first half, the Pioneers were able to put points up against the same defense in the second half. The Pioneers actually won the scoring battle after halftime but it was due to their defense ramping up.

“Even if we’re not turning somebody over, if we’re pressuring and we’re guarding, we get into our sets a lot quicker and move the ball a lot better,” Fergus said. “They didn’t change their defense, why should they? We just scored against in the second half and it’s all because of our defensive energy.”

Ralph Saint-Fleur led Dock with 18 points. Center Darius Ellis had 12 points and Steve Martin scored 10 as both were named to the All-Tournament team.

Fergus likes the potential of his team but with a lot of players taking on expanded roles or new to starting, he thinks it will take some time. Dock also plays seven straight games away from its home gym to start the season before hosting its holiday tournament, so there may be some ups and downs early on.

“We’ll get there, but we may be like this early in the year,” Fergus said. “I think after our Christmas tournament, we’ll be where we need to be. If we’re not, that’s where we’ll have a problem.”

Price, who joined Natale on the All-Tournament team, hit a key 3-point off a kickout pass from his teammate to break up a Dock fourth quarter run. The junior sixth man had 13 off the bench and Natale cited the overall play of the reserve group this weekend as a strength.

Souderton has its most experienced team in a few years and as it stands, the Indians aim to be a factor in the SOL Continental this winter. They get their first taste of conference play Thursday at North Penn, but have a nonleague tilt with Great Valley first on Tuesday.

“I think we’re all together, we have a lot of talent but that team dynamic is really important to us,” Natale said. “We’re trying to put a banner on the wall, so that’s where our focus is this year. We’re all putting in 100 percent, it makes a difference and I think it showed in this tournament.”

Natale isn’t going to be the high scorer every night, but he trusts his teammates just as much as they trust him. Whatever his role on a given night, the senior is going to pour all he has into it and his coach is willing to roll with it.

“He’s playing great basketball, he’s a fun kid to watch and sometimes, you can’t do too much coaching and just let Dom be Dom,” Brown said. “Ultimately, he’s proven he can make those decisions and he’s going to make mistakes at times but also make up for them and just play with unbelievable tenacity and heart. We always know what we’re getting from Dom.”