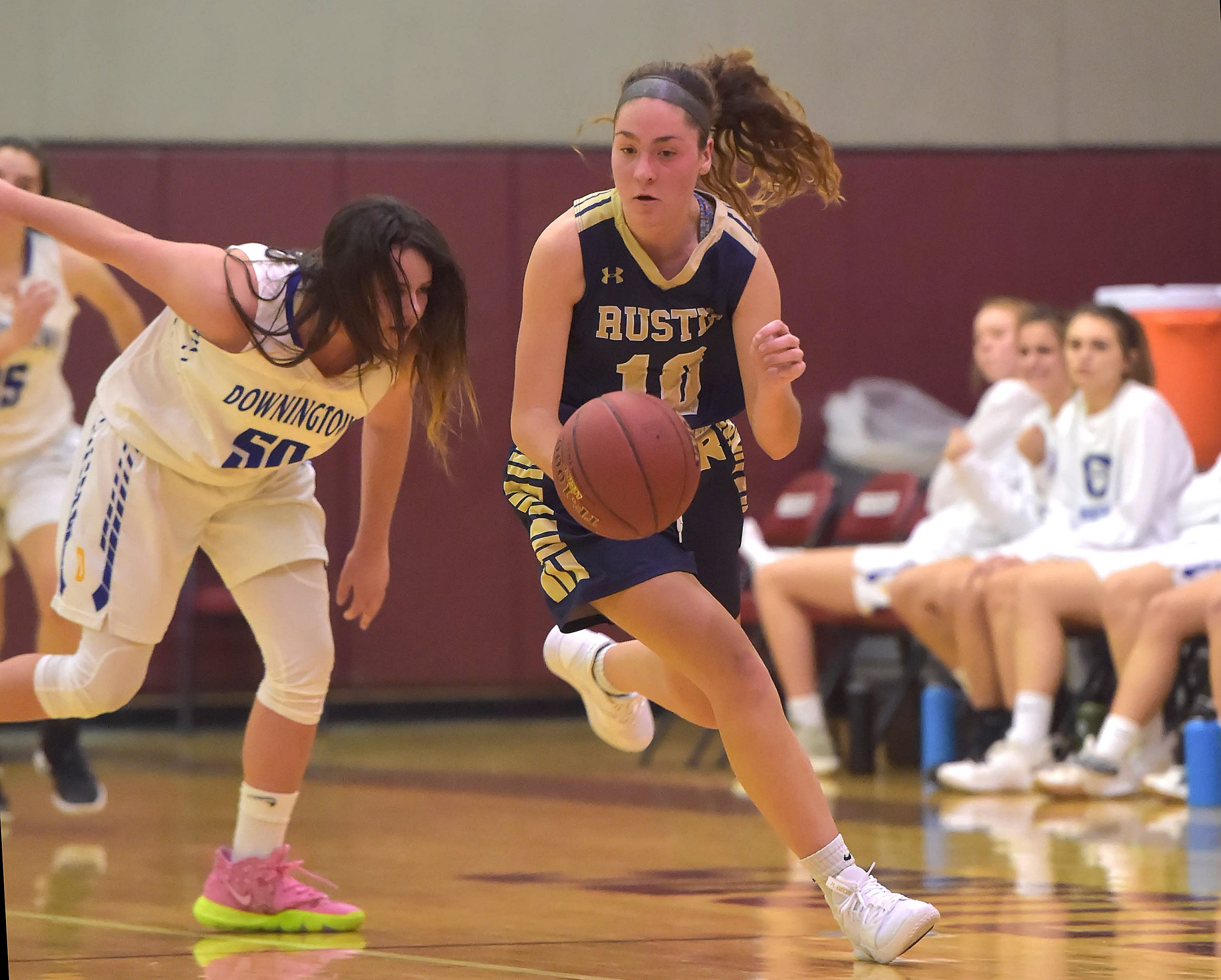 WEST CHESTER – The initial moments of first-year head coach Lauren Stackhouse’s tenure at West Chester Rustin was a bit shaky, but the Knights overall first impression for the 2019-20 girls’ basketball season was quite positive indeed.

On the strength of three dominating quarters to finish it out, Rustin cruised past Downingtown West 63-35 at the Ches-Mont Challenge on Friday. It was the season opener for both teams.

“The team I saw early was a team that I didn’t know,” Stackhouse said. “I told them it looked like they were trying to give me a heart attack in that first quarter, but we made some adjustments and kept our composure.”

It was also the head coaching debut for Whippets’ head coach Mike Young. His team was on fire early but cooled off quickly in a hail of turnovers and errant shots.

“We have a lot of things to work on obviously,” he said.

Down by eight after the slow start, the Knights went on a 20-8 second quarter run to take a four-point lead into the intermission. It also didn’t help the Whippets’ cause when junior Jillian Arrowsmith went down with an apparent knee injury in the final minute.

It was more of the same in the second half. Three-pointers by Marisa Betchyk, Sam Greer and Grace Shivers helped the Knights to a 22-7 advantage in the third quarter, expanding the lead to 48-29.  In the middle quarters, Rustin outscored West by 27 points.

“We just needed to get the jitters out,” Stackhouse explained. “We were pretty amped up coming out of the locker room.

“In the first quarter (West) couldn’t miss a shot and we couldn’t seem to find the bottom of the net. But then we relaxed a bit, turned it on and played the style of play we are used to playing.”

A junior guard, Betchyk came off the bench to lead the Knights with a game-high 22 points. And much like her team, Betchyk thrived after an inauspicious start scoring all of her points in the final three quarters.

“I just came ready to play and wanted to help us get a team win,” she said.

“Marisa was the spark we needed off the bench,” Stackhouse added. “She didn’t play scared.”

“I think we just wanted it more,” said Betchyk, who scored her career high in the process.

Junior center Shayla Johnson scored 11 of her 17 points in the first half for the Whippets, but no other player on the roster managed more than a single field goal.

“We want Shayla to score like that, but we have to have some other people contribute,” Young said. “In the second half we got some shots and didn’t knock them down.”