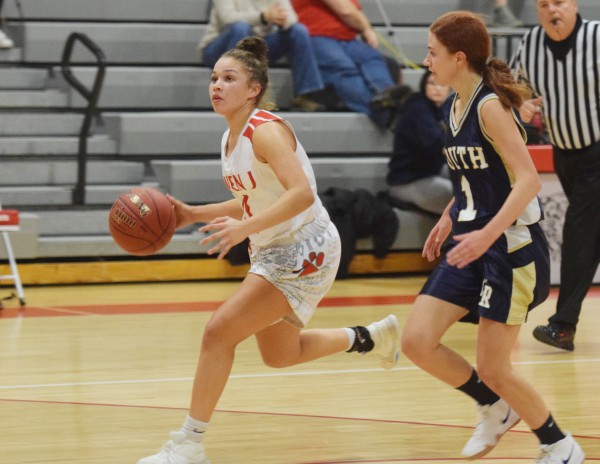 Owen J. Roberts 64, Coatesville 23 >> The host Wildcats cruised in their season opener, getting 21 points from Avery White to advance to the OJR tournament championship Saturday.

Hannah Clay and Brooke Greenawald added eight points apiece for OJR in a rematch of last year’s District 1-6A playoff first round.
OJR, which built a 30-10 halftime lead, meets the winner of Council Rock South and Northampton in the final at 5 p.m. Saturday.

Phoenixville 25, Conestoga 23 >> The Phantoms’ fourth-quarter rally was just enough in its opener against the Pioneers. Angelina Williams scored 10 of her 12 points in the final frame as Phoenixville dug out of a deficit after scoring only 11 points in the first three frames and went 4-for-19 from the free-throw line.

After trailing 10-8 after the first quarter, the Falcons held leads of 24-18 at halftime and 40-30 after three quarters before holding off Reading in the fourth.

Sierra Potts added nine for Pottsgrove, all of which came on three 3-point shots. Sydney Mowery added eight points and Justine Fretz and Summer Walker both contributed seven points in the winning cause.

Methacton meets Ridley in the championship at 6:30 p.m. Saturday.

In their first home game of the season, the Blues raced out to an 8-0 advantage–highlighted by a steal and layup by Farrell and a three-pointer by freshman Courtney Bodolus. Williams scored nine points in the first quarter as Hill pushed its lead to 23-8, and she added seven more in the second to put Hill ahead 40-13 at halftime.