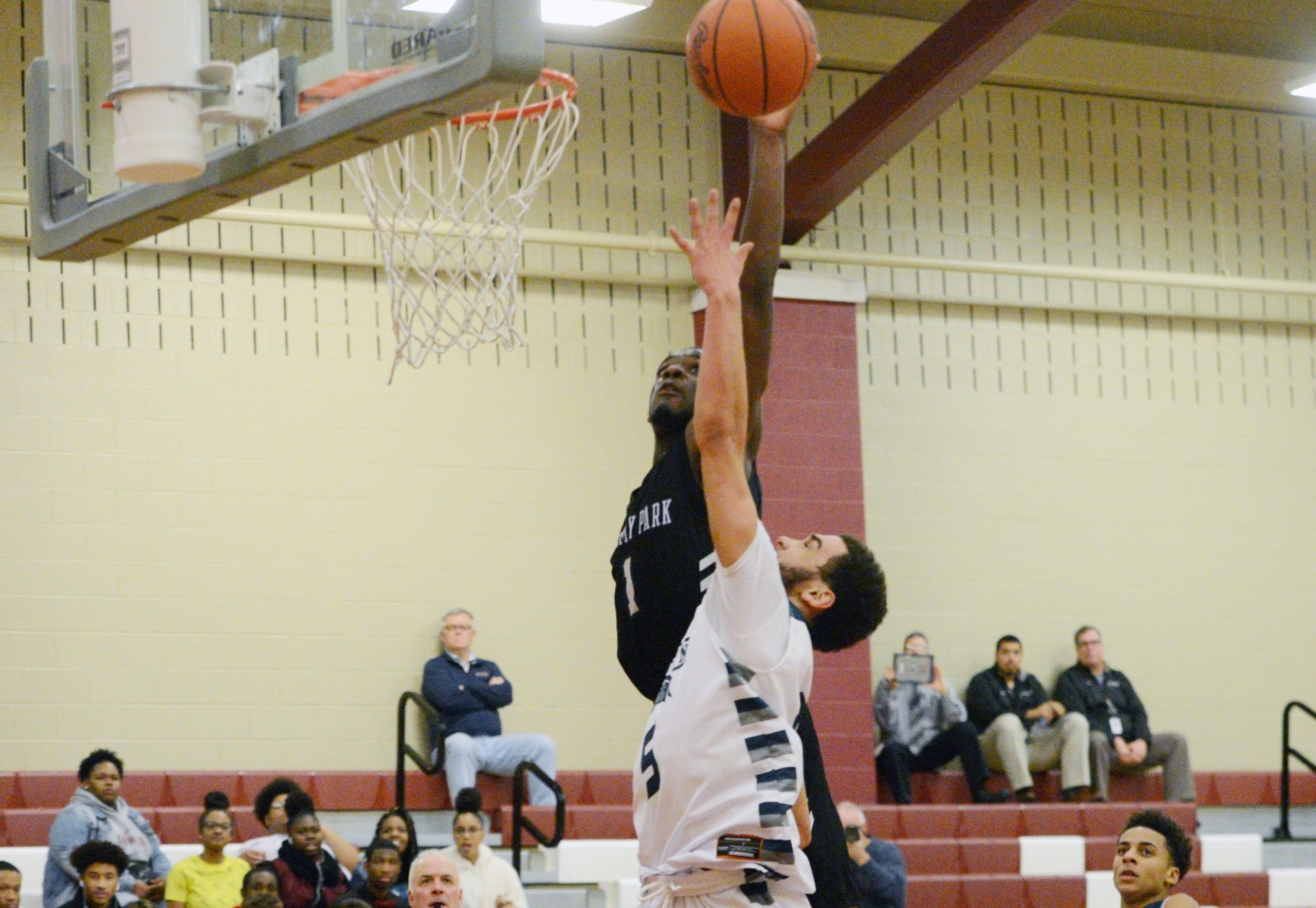 LOWER POTTSGROVE >> As Academy Park head coach Kevin Stewart paced the sidelines as the head man at his alma mater for the first time, he watched his team go down by 10 points to Pottstown, just minutes into the game.

The Knights rallied with a run of their own to close the first quarter and continued to score in bursts sparked by the fast-paced style and scrappy defense Stewart likes to play.

Led by 14 points off the bench from speedy guard Namir Simmons and five others with eight or more points, the Knights gave their head coach a 71-58 win over Pottstown in his debut at Pottsgrove High School.

“They’re still learning my system,” Stewart said. “I’m still learning them. I’m sure they had some jitters. Once we settled down defensively on the defensive end, we were able to get stops, which led to layups on offense.”

Stewart said his team was a bit surprised by the athleticism and physicalness of Pottstown in the early going, comparing the play of the Trojans to a Chester or Penn Wood team his squad might face in the Del-Val league this season.

Pottstown built a 15-5 lead early in the game only to see an 11-0 run by Academy Park completely wipe it away before Tre Bass knocked down a three to give the Trojans a 16-15 lead at the end of the first quarter.

Academy Park grabbed a 35-29 lead at halftime and led 41-31 lead two minutes into the third quarter. The Trojans trimmed the lead to seven and eight a handful of times, including 52-45 at the end of the third, but couldn’t string enough baskets together to cut into the deficit.

followed Simmons with 12 points and Jalen Cassidy and Tahriq Marrero joined them in double figures with 10 points each for Academy Park.

Senior Wilchon Seward, who scored six points, and junior Darius Smallwood who added five points are two others back who saw varsity action a season ago.

The Trojans finished tied with Pottsgrove for the final Pioneer Athletic Conference playoff spot last season, but missed out on a tiebreaker due to two head-to-head losses to the rival Falcons.

“It’s kind of a motivation, we’re pushing toward what we didn’t make last year,” Towson said. “That’s what we were working on in the summer, building some chemistry on the court and trying to regroup as one. If we keep pushing the ball, doing what we gotta do at practice, keep our heads held high, we’re going to make it far.”

In what appears to be a wide open Frontier Division once again, the Trojans feel they have the pieces in place to get back to the league postseason for the first time since 2011-12.

“That’s our goal. It’s playoffs or bust for us,” second-year head coach Scott Palladino said. “There’s no not making the playoffs for us. That’s just the mentality that we have. I know we have the pieces to do it. Tonight, we played well for a quarter and kind of dug ourselves a hole.

“I think we beat ourselves, turnovers, we weren’t getting back on defense. It was just little things that kind of snowballed on us.”

Stewart, who played at Lackawanna College and University of Pennsylvania after his career with the Knights was an assistant at Academy Park for a season before spending the last two years on the bench at Imhotep Charter.

His goal is to take an Academy Park program that’s fallen in the first round of the district playoffs in its past three seasons to the next level.

He’s off to a good start.

“I’m just happy to be back home and get after it,” Stewart said. “We’ve always had a good program, I’m just trying to take it to the next level. We’ve always had the athletes. We could be more disciplined, share the ball more, just change the culture a little bit.”