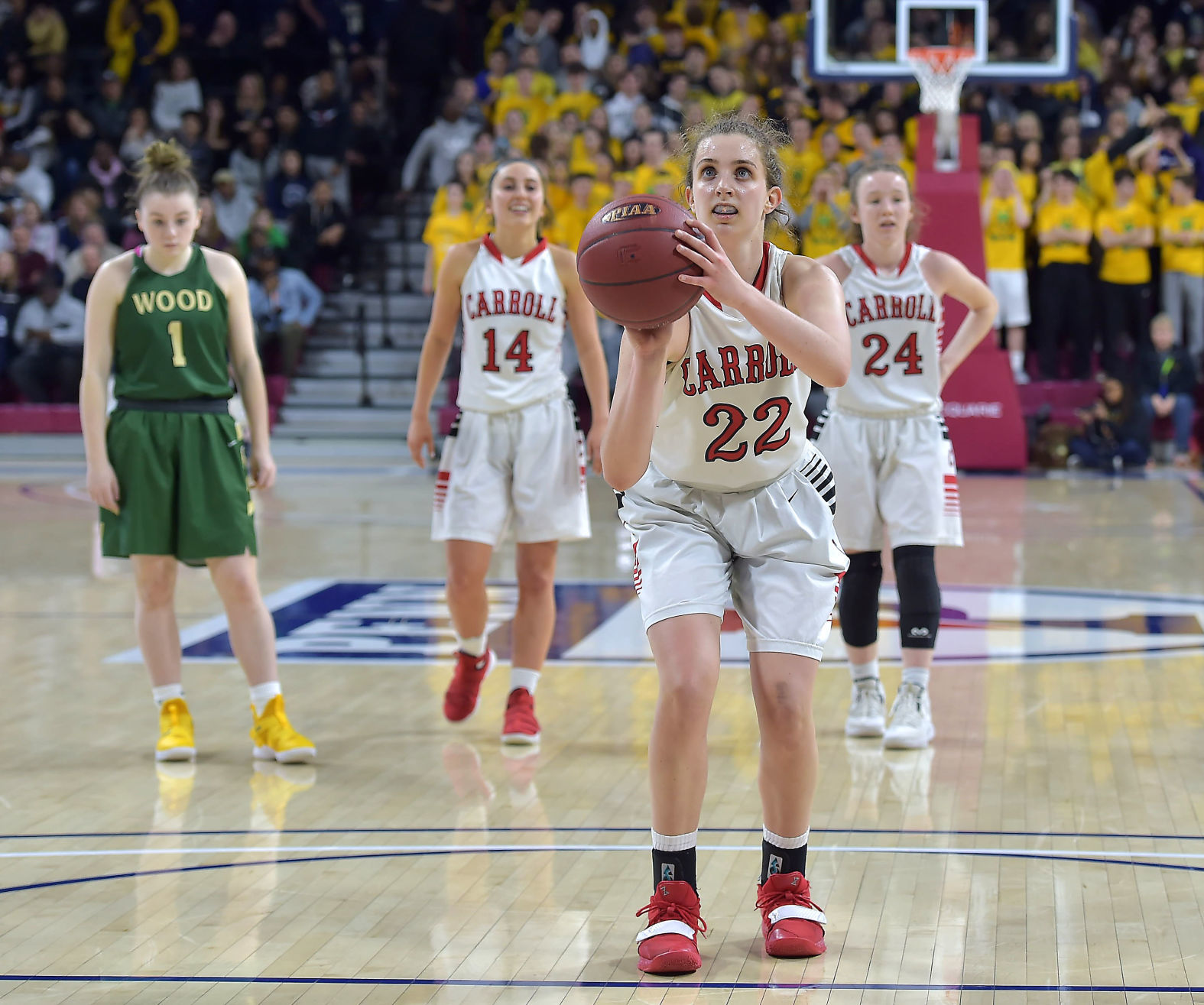 Erin Sweeney and Archbishop Carroll are the defending Catholic League champions. Last year, Sweeney was the second-highest scorer in Delaware County and scored the most points of any player. (Pete Bannan/MediaNews Group)

The Catholic League is experimenting with a two-division set up for the 2019-20 campaign.

Applying to girls basketball only, this one-year trial of separating teams based on recent success should alleviate the many one-sided results that have transpired in the past.

At the same time, the competition for some teams gets a bit tougher.

“We will play each team twice, home and away,” said Bonner-Prendergast coach Tom Stewart. “I think Carroll and Goretti are the favorites going in, but every team in our division is tough.”

The Red Division will consist of seven teams, all of which are considered the strongest programs in the league. Delco’s three Catholic powers, Archbishop Carroll, Bonner-Prendergast and Cardinal O’Hara, will be joined by Archbishop Ryan, Archbishop Wood, Neumann-Goretti and West Catholic.

Cardinal O’Hara’s Sydni Scott, one of the Lions’ leading scorers as a freshman last season, is looking to hone her already impressive shooting skills this season. (MNG File)

All of those teams advanced to at least the second round of their respective PIAA tournaments last winter. N-G, O’Hara and Wood competed in the state quarterfinals, while Carroll was the Class 5A championship finalist.

Divisional rivals will meet twice in the regular season. Local fans will get to watch Delco’s PCL teams clash in a home-and-home format.

Last season, Archbishop Carroll captured the PCL and District 12 Class 5A titles and advanced to the championship game of the state tournament, falling to District 7 heavyweight Chartiers Valley.

Erin Sweeney returns following a brilliant junior campaign. The Drexel commit was the second-leading scorer in Delaware County, averaging 18.2 points per game, and was tied for first with 72 3-point field goals. She paced all Delaware County players with 537 points.

Following a stellar rookie year, sophomore Grace O’Neill is back at point guard. Junior guard Karli Dougherty, who provided good depth and defensive prowess, will likely see her offensive role increase. The Patriots said goodbye to senior guard Harlem Jennings, who is continuing her career at University of Sciences.

Carroll is coached by Renie Shields, who begins her third season at the helm. The Patriots tip off the season Saturday against Cape Henlopen (Del.) at the 76ers practice facility in Wilmington.

Bonner-Prendergast is coming off a 19-10 season and a run to the final four of the Class 4A tournament.

Senior forward Alexis Gleason, who has been a regular in the starting lineup since her sophomore year, gives the Pandas versatility in the low post.  Gleason is a West Chester University commit.

Sophomore guard Bridie McCann had flashes of success in a utility role last year, while junior Regan Dolan has the potential to be a viable wing player. Junior guard Alexis Eagan is another scoring threat who gained valuable experience as a starter last year.

The Pandas look to overcome two key losses — one by graduation, one via transfer. All-Delco guard Maeve McCann is playing ball at Jefferson University. Meanwhile, combo guard Dakota McCaughan will spend her senior year at Ridley.

Stewart, a 500-game winner in his career, begins his 27th year as head coach for the Pandas.

“We return three starters, but we will need to get contributions from some of our younger players as well as some meaningful minutes from the girls coming off the bench,” Stewart said. “As always our goal is to get better as the season goes along so we are ready for the Catholic League playoffs and state playoffs. We have two injuries at the present time (and those players) are due back after Christmas, and both are possible starters.”

Cardinal O’Hara’s youth movement of 2018-19 yielded positive results under first-year head coach Doogan. The Lions made a surprising run to the quarterfinal round of the PIAA Class 6A tournament on the strength of underclassmen.

Sophomore Sydni Scott and junior Amaris Baker, both dynamic shooting guards, were the Lions’ top scorers a year ago. Rangy junior guard/forward Siobhan Boylan could be due to for a breakout season, while sophomore big Maggie Doogan, the coach’s daughter, has the chance to become a dominant presence in the frontcourt. Senior forward Steph Huseby also returns to the starting lineup.

“With 11 returning varsity players, we will look to build off of last season’s run to the state quarterfinals,” Doogan said. “We have players back that played a lot of minutes last year. Hopefully experience will help turn some close losses last year into victories.”