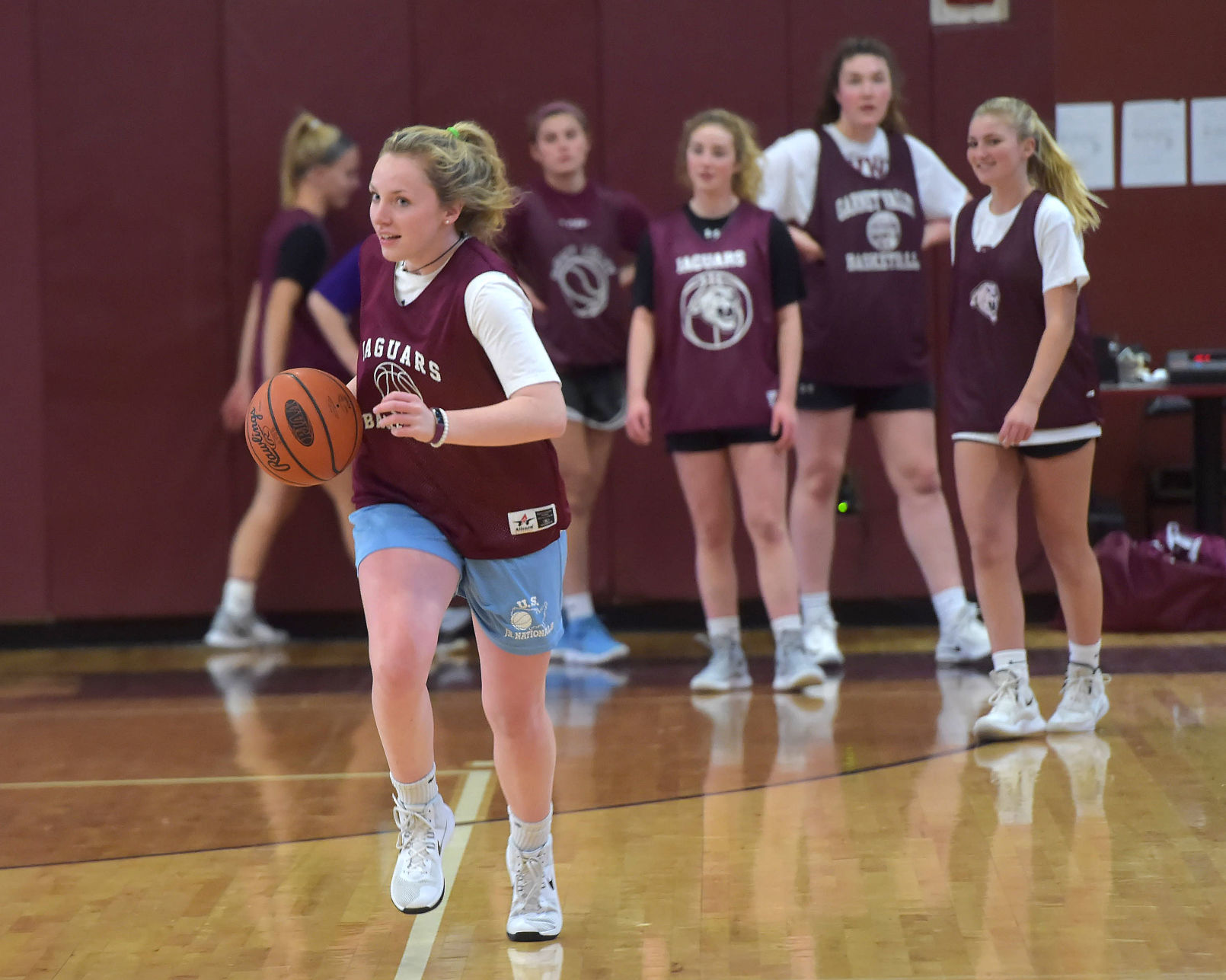 Garnet Valley senior Abbey Anderson dribbles at a practice this week. Anderson is one of three captains trying to rebuild the Jaguars after they lost all five starters from last year's district championship squad. (Pete Bannan/MediaNews Group)

There are District 1 Class 6A championship and PIAA runner-up trophies encased outside the gym doors. Once you’re on the hardwood, there are banners reminding everyone of the team’s accomplishments. The name Emily McAteer, the 2019 Daily Times Player of the Year, sits atop the list of all-time leading scorers in school history. Brianne Borcky’s name is among the 1,000-point scorers, too.

GV finished 30-2 last season. The Jags captured their fourth Central League title in five years, won the program’s first District 1 championship and made it all the way to Hershey to play for a PIAA title. The Jags lost to undefeated Peters Township in the finale.

The greatest era of Garnet Valley basketball is in the past. Now it’s time for 2019-20 co-captains Abbey Anderson (senior guard), Liesl Dentinger (senior forward) and Courtney MacDonald (senior guard) to move the program in a new direction. Anderson and Dentinger were valuable contributors off the bench in the state final, along with junior guard and defensive specialist Kendall DiCamillio.

“What we said in the beginning was, it’s OK to remember what happened last season. You don’t ever want to forget it,” Anderson said. “But we have to remember to focus on this season … and we have to find our goals for this season.”

“It’s exciting and so different,” said MacDonald, who missed all of last season due to health issues. “We want to start each day with the idea of trying to get better.”

Dentinger learned so much from practicing against McAteer and Borcky. The 6-3 center/forward could become one of the most dominant bigs in the county.

DiCamillo’s clutch defense in the postseason saved the Jags a time or two. She has worked to improve her offensive games.

“I think a lot of us have the experience. Everyone contributed something last year, even if it was just at practice and our job was to defend our starting five,” she said. “It’s definitely going to be a big change from last year … but I feel everyone brings something to the team. It may take some time, but I feel the pieces are going to fit perfectly and we will be ready.”

“This is teaching to me,” Woods said. “I love the challenge of a new group. … We’re going to work like crazy, but we’re going to have fun.”

“We are going to share the ball,” Woods said, “and a lot of players will have the opportunity to contribute.”

All five starters, including top scorer Erin Doherty, have moved on to college. The Fords finished 17-9 and fell in the second round of the District 1 Class 6A tournament.

“After losing nine seniors (four of whom are currently playing college basketball) and 98 percent of our offensive production to graduation, we are facing a rebuilding effort,” Pellicane said. “This will be a real transitional year for us as we are an unproven group. We lack experience … but have young talent that are fearless and will have an opportunity to contribute right away.”

Ryan Wolski starts his fifth season at Marple Newtown, which struggled to a 6-16 mark last year.

Leah Shumoski, who scored 1,388 points at Delco Christian and Marple Newtown, is the new head coach at Penncrest. Shumoski set the career points record at University of Sciences and is a member of the school’s hall of fame. She has been a head coach at West Chester Rustin and Upper Merion.

The Lions look to improve upon a 5-17 season. Senior forward Alexis Calloway is their top returning player.

Jordan does believe in his Raiders, who went 20-7 last year and qualified for the PIAA Class 5A tournament. Ellie Mueller, a 1,000-point scorer, is one of the best players in the league. The 5-10 senior forward averaged 17 points a year ago. Junior guard Brienne Williams (10.3 ppg, 38 3-points), junior forward Cierra Hopson and senior guard Julia Rigolizzo also return to the starting lineup.

Unfortunately, senior guard Missy Massimino will miss the entire season due to a knee injury.

New bench boss Roe Falcone comes home to Ridley, where she was an All-Delco basketball player and a standout in softball.

Falcone is a member of the Delco Athletes Hall of Fame, scoring more than 1,000 points and setting the school assists record at Dickinson College.

Falcone is excited to coach senior guard Dakota McCaughan, who transferred from Bonner-Prendergast. McCaughan is a three-year varsity starter who helped Prendie make the semifinal round of the PIAA Class 4A tournament. McCaughan was a second team All-Delco in each of the last two years.

Senior forward Morgan Chapman and junior guard Lindsay Boyd lead an experienced group. The Green Raiders aim to bounce back from a 9-13 campaign.

Springfield is a contender for the Central League title despite the loss of 1,000-point scorers Jordan D’Ambrosio and Belle Mastropietro, who guided the Cougars to District 1 and league championships. D’Ambrosio is the team’s all-time leading scorer.

The Cougars have experience on their side. Senior guard Alyssa Long is one of the best multi-sport athletes in the county. Junior guard Alexa Abbonizio has the second-most 3-pointers of any active player in Delco over the last two years. Senior guards Jordan Postiglione and Carli Johnston and junior guard Rachel Conran played key roles in the Cougars’ run to the state playoffs last season.

Nick Libero goes from assistant coach to head boss at Upper Darby. Last season, the Royals registered 13 victories and qualified for the district playoffs for the first time in several years.

Strath Haven posted a 14-9 record last season and lost in the opening round of the District 1 5A playoffs.