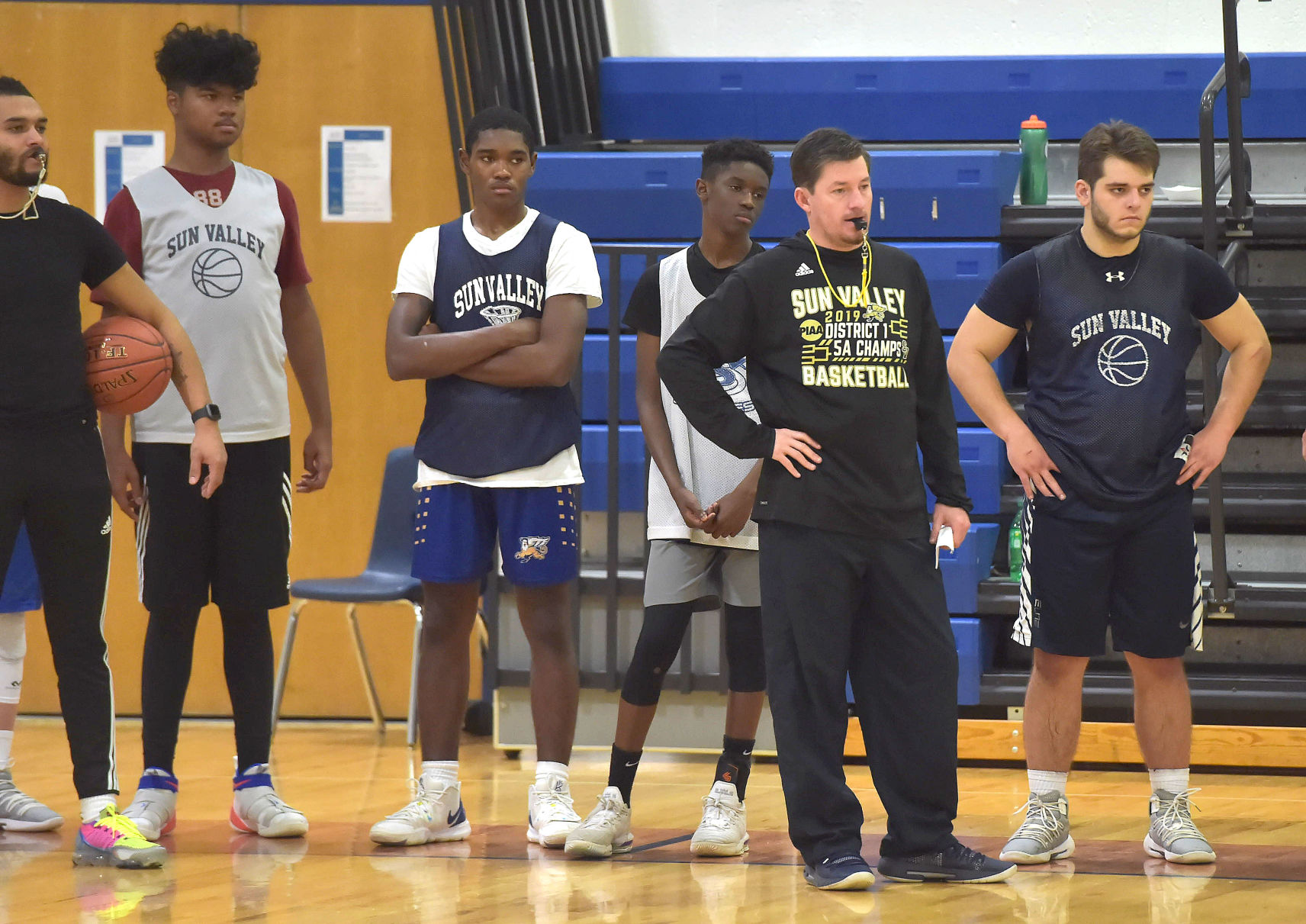 ASTON – As much as the banner in the gym or the T-shirts worn by coaches during practice, one factor epitomizes Sun Valley’s growth for Dom Valente. This fall, seven freshmen are running through the combined JV-varsity practice. That’s in addition to a full 10-member freshman squad.

How’s that compare to the numbers when Valente, a senior guard, was a rookie for then-second-year coach Steve Maloney?

“There were three,” Valente said.

That organic growth has defined the Vanguards, who made back-to-back PIAA Class 5A tournaments and are the reigning District 1 champions. It also informs the way forward after the four players comprising that illustrious generation moved on, the cultural elements of a program that stick around campus for more than four years.

“It’s definitely a big change losing them, but I think we’ve been able to keep the culture up,” senior guard Billy Fisher said. “We’re not rebuilding; we’re trying to keep going.”

“I try to be as much of a leader as all them,” Valente said of the departed Vanguards. “This year, it’s a little different. You’ve got younger kids trying to learn everything that we did last year. It’s not that difficult, but we’re getting there.”

Fisher didn’t shoot much last year, but his game is more diverse than last year’s squad required. At 6-foot-6, Giannakopoulos has height that is in short supply.

Whichever of the ample supply of underclassmen steps up, the Vanguards possess something that pre-Maloney teams didn’t. Teams no longer venture to Aston with a win already ticked off on their schedule. That self-belief is a big part of the battle, no matter who’s wearing the jersey.

Guard Billy Fisher will go from the sixth man last year to a featured scorer for Sun Valley this season. (Pete Bannan/MediaNews Group)

“It’s a sense of a pride factor,” Fisher said. “We want to keep doing what those guys did before.”

Chester will do its usual reloading, with All-Delco point guard Michael Smith moving on. But Akeem Taylor, who scored 11.2 ppg last year and turned it on down the stretch, is back as a do-everything guard.

The backcourt will be in good hands with Rahmee Gilbert and Fareed Burton, while forward Zahmir Carroll’s game grew markedly as last season progressed.

Penn Wood made the District 1 Class 5A quarterfinals last year, but most of that squad has moved on. Only Desman Johnson, who averaged 9.3 ppg, has meaningful varsity experience.

The underclassmen ranks contain talent, but it may take time to develop. Senior guards Hugh Boothe and Shamir Barnes and sophomores Naeem Purnell and Abdullah Dublin are among the top prospects.

Academy Park is starting a new era under alum Kevin Stewart, who served as an assistant under Frank Wolf before spending 2018-19 on staff at PIAA Class 4A champ Imhotep Charter.

Clyde Jones’ program-building continues in his third year at Chichester. The Eagles have leading scorer Josh Hankins, just a junior, back from a 13.9 ppg season, but the veteran role players around him have graduated. Jones is looking to a talented sophomore class to step up quickly.

If you have to restock after a generation for the ages, you’d want to be in Haverford School’s position. The Fords went 28-0 last season, winning a second straight Inter-Ac title and the PAISAA championship.

Four starters from that team are playing Division I sports, including Daily Times Player of the Year Christian Ray (La Salle) and Jameer Nelson Jr. (George Washington) on the basketball court. It’s not a total rebuild, but those four starters accounted for 61.8 percent of the Fords’ points.

Jameel Brown’s contributions (11.6 ppg, team-high 43 3-pointers) as a freshman flew under the radar, but he’s got Division I talent. With juniors Christian Clover and Tyler Seward, the backcourt is in good hands. Senior multi-sport athletes Matt McKenna and MJ Atkins provide frontcourt depth.

Injuries doomed Episcopal Academy to a rare sub-.500 year, but new coach Brian Shanahan has pieces to build around.

Alex Capitano, injured in mid-January, still averaged 16.4 ppg last year. Another year should make Colin Chambers into a more complete backcourt complement, while Andrew Alikakos and Malcolm Folk will have big roles in the frontcourt rotation.

A pair of players with potential Division I futures will lead Delco Christian. Leading scorer Jackson Piotrowski, an all-state pick in Class 2A, is getting lots of college looks. He averaged 15.1 ppg as the Knights won District 1 and made the PIAA Class 2A second round.

Last year’s second-leading scorer, Obinna Nwobodo, has committed his football future to Villanova. Sophomore guard Joshua Parks is also back, and while the Knights lost projected starters Ebuka Nwobodo and Micah Guindo to transfers, football standout Jordan Mitchell is back.

TCA has to replace its top two scorers, but the Crusaders will build on an 11-win season with a core of eight seniors. Jourdan Greene averaged 9.8 ppg to lead the returnees, and fellow seniors Grant Sareyka, Sam Geathers and Isaiah Mitchell showed lots of promise in limited roles.

Former Strath Haven coach Dan Spangler moves further down Route 252 to take over Chester Charter Scholars Academy (former Chester Charter for the Arts). In its third season, many of the Sabers’ founding members remain, hoping to build on 13 wins and a near districts bid last winter.

The rotation is still mainly composed of underclassmen, with 6-10 Tyler Howard and Damir Baez the exceptions. Five of the top seven scorers from last year are back, led by Bruce Rogers at 9.0 ppg. The juniors form the team’s nucleus – Rogers, Sean DeShields, Davon Stovall, Timmy Evans, Breon Showell and Jaquan Fisher.