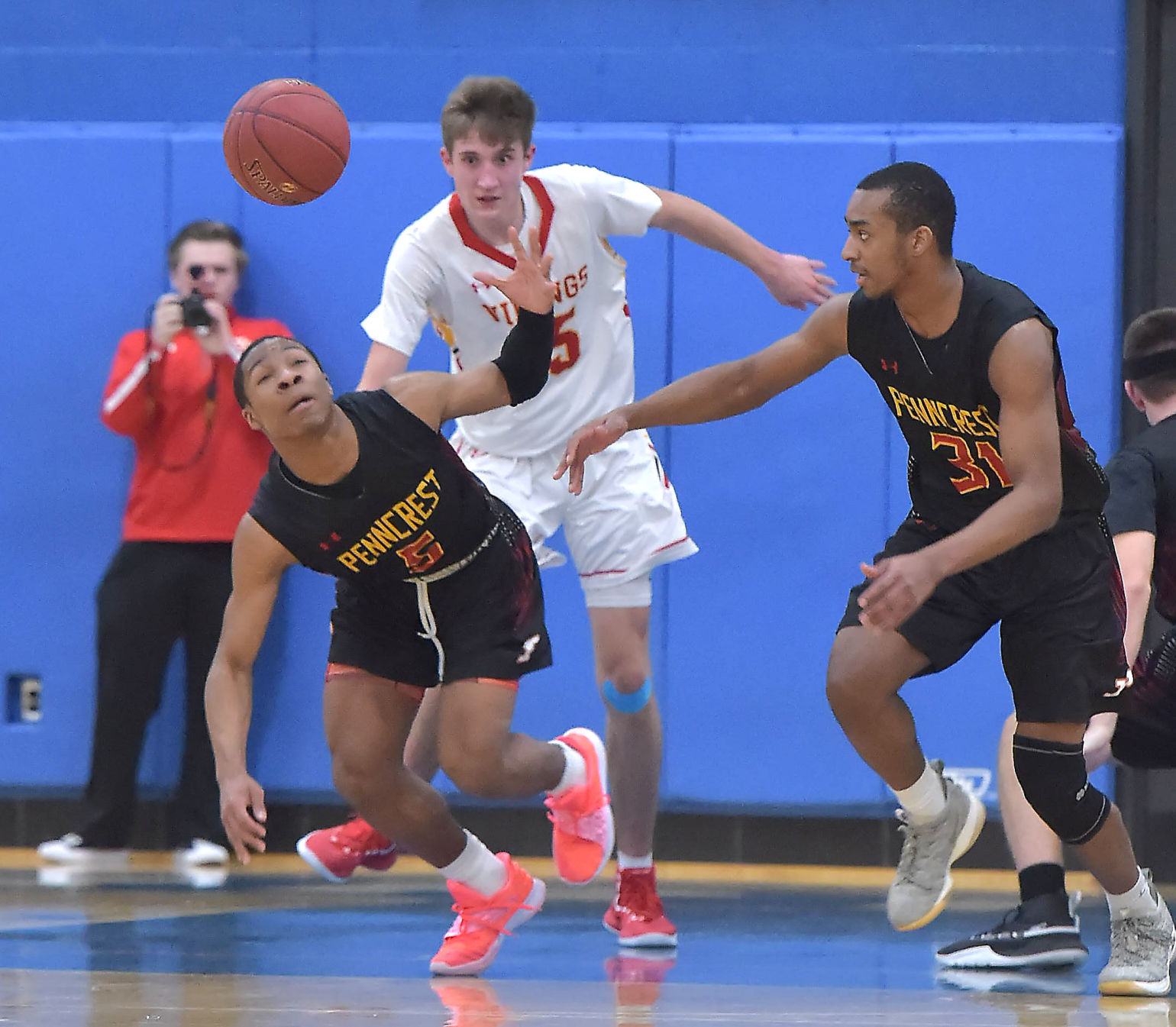 Penncrest's Marquis Tomlin, left, is one of the returning leaders in the Lions' quest for 12 straight districts berths. (Digital First Media/Pete Bannan)

Penncrest’s quest to make it five state tournament berths in six years will require replacing its top three scorers from last year’s run to the second round of the PIAA class 5A tournament, including All-Delco Malcolm Williams, who was the team’s only double-figure scorer at 18 points per game. But coach Mike Doyle’s cupboard isn’t exactly bare.

The backcourt features two seasoned seniors in Aidan Carroll and Marquis Tomlin, both of whom need to step up from complementary roles as underclassmen. In junior center Denzel Boyer-Atkinson, the Lions have height in a league generally devoid of it.

Ben Stanton got time as a freshman; he and fellow sophomore Saahir Lee will get chances to shine. Forwards Justin Potts and Denzel Quinn will round out the low-post rotation for a program looking for its 12th straight districts berth.

Garnet Valley’s Carl Schaller, right, looks to be one of the scoring leaders for a Garnet Valley team that may be going places. (Pete Bannan/Digital First Media)

Despite a 14-win season and a berth in the District 1 Class 6A field that is becoming increasingly routine, Garnet Valley’s best days may still lay ahead. The Jaguars’ two returning double-figures scorers from last season, do-everything point guard Carl Schaller and sharpshooter Neel Beniwal, are just juniors. They combined for 26.1 points per game last year, and Beniwal was one of Delco’s top long-range shooters at 58 made triples.

Between the varsity success and a 19-win JV season, coach Mike Brown is optimistic about what’s ahead. Guard Ryan Louden will take on a bigger role as a senior, while forwards Chris Coyne and Gannon McKee will go from subs to starters as complements to the Jags’ outside-in game.

The newcomers will play big roles in the frontcourt in particular, led by seniors Adam Stuck and Saleem Dwight-Ferebee and junior Hunter Kraiza, all of whom got some experience a season ago.

Radnor won 11 games last year, and its two-headed scoring monster is back, with senior wing Jack D’Entremont and junior point guard Lew Robinson coming off impressive seasons. Pat Boujoukos offers experience in the post, while Jahmir Dixon will contribute in the backcourt.

Freshman Danny Rosenblum could contribute right from the start.

Ridley has to replace leading scorer Enoch Clark, who averaged 17.3 ppg. But the Green Raiders have a handful of veteran contributors to do that.

Point guard Malachi Williams, a starter since his sophomore year, averaged 9.5 ppg last year and will likely have to step up his offensive output. Jack Grace and Josh Howard were the team’s top 3-point shooters a season ago, and Cam Farro adds punch in the backcourt.

Upper Darby endured an eight-win follow-up in 2018-19 on the previous year’s states berth. But those struggles forced others to step up.

One big addition to the frontcourt is 6-7 freshman Onyekachi Nzeh.

It may take some time for Marple Newtown to coalesce this season, thanks to the loss of its top two scorers from last year’s eight-win campaign and the infusion of a large football-playing contingent. But that talent has worked for Sean Spratt in the past.

Joey Pettinelli and Mike Tansey will be tasked with replacing the scoring contributions of Tommy Gardler (17.2 ppg) in the backcourt, though both showed off their shooting abilities last year. Guards Eric McKee and Justin DiBona, who logged significant minutes as freshmen, will step into the rotation. Harder to replace will be the 12.2 ppg and constant double-double threat that forward Aziz Khammassi provided a season ago.

Strath Haven tapped its Media Bowl rival Penncrest to land Chris Conlan as its new coach, looking to recover from a 3-19 season under Dan Spangler. Spangler was hampered by a young squad, and Conlan hopes to reap the benefits of those growing pains.

Leading scorer Luke Edwards, who hit 51 3-pointers last year, is the leader, and is just a junior. His shooting will be complemented by senior guard Justin Morris, while Ibo Pio and Matt Shuler provide quickness off the bounce for the guard-heavy Panthers.

Sophomore Isaiah Freeman will be in the rotation, as will junior forward Robbie Guilday for a team that lacks length.

No one felt more growing pains than winless Springfield last season. But Kevin McCormick is back for his 26th year in charge believing that the lessons incurred with last year’s senior-less roster will pay dividends.